Injuries are a part of the NBA. From rolled ankles to ruptured Achilles tendons, each season several players suffer a wide range of injuries, which often have a ripple effect. A small injury to a veteran could give a young player the small opportunity he needs to show he should be given more playing time. Major injuries sometimes lead to major opportunities for a player to take on a bigger role and show that he is ready to take on more responsibility and carry a bigger load for his team.

On August 4th, while playing for the Australian national team, Utah Jazz point guard Dante Exum suffered a torn ACL. Exum was driving into the paint and made a jump stop when his knee buckled, similar to Derrick Rose when he first tore his ACL in 2012. This injury is an unfortunate turn of events for Exum, age 20, and the Jazz, especially considering the optimism surrounding the team heading into next season.

Utah went on a second-half surge last season, mostly on the strength of their defense, which is why many fans and analysts believe the Jazz will make the playoffs this upcoming season. Another reason for optimism, prior to Exum’s injury, is the fact that the young point guard showed signs of improvement during the offseason. The best of example of this is when he posted 20 points, five assists and five rebounds against the Boston Celtics in the Utah Jazz Summer League. Most importantly, Exum shot 10 free throws (it would have been twelve, but he suffered an ankle injury on the final foul which ended his night early), making nine of his attempts. This is significant because Exum almost never went to the free throw line last season. He showed a heightened confidence in his ability to attack the rim and make plays off the dribble, which is something he struggled with mightily in his rookie season.

With Exum likely out for the entire season, the starting point guard position will likely be occupied by Trey Burke. As previously mentioned, while injuries are unfortunate, they are a part of the game, and with this injury to Exum, there is now an opportunity for Burke to show that he is ready and capable of being a starting point guard in the NBA.

This is a great opportunity for Burke for several reasons. First, much of the credit for the Jazz’s second-half surge last season is attributed to Exum. While Exum only averaged 4.8 points, 2.4 assists and 1.6 rebounds per game, while shooting 34.9 percent from the field, his length and versatility on defense was a big part of the Jazz’s turnaround. However, the Jazz’s second-half surge is more attributable to trading Enes Kanter and inserting Rudy Gobert as the full-time starter at center than it is to inserting Exum as the starting point guard. Kanter was by just about all statistical measures one of the worst defensive players in the league, and was in fact ranked dead last among all qualified centers in ESPN’s Defensive Real Plus-Minus metric (-3.87). Replacing Kanter with Gobert, who ranked in at fourth among all qualified centers in Defensive Real Plus-Minus (+3.63), was a huge swing in favor of the Jazz, which was far and away the best defensive team in the NBA throughout the second half of last season.

So while Burke is certainly a downgrade from Exum defensively, the drop off shouldn’t be as significant as many people may expect. Assuming that the Jazz can manage a top-level defense next season without Exum, Burke will likely receive credit for holding down the point guard position on defense, even if the credit really should be attributed to the defensive strength of his teammates.

Secondly, Burke is theoretically well-suited to fill Exum’s role on offense and even improve upon it. Last season Exum was often times played off the ball as a spot-up shooter since he didn’t get to the foul line much, didn’t have the ability to make plays off the dribble consistently and was a turnover machine in the pick-and-roll. Since the Jazz are already accustomed to playing with a point guard that is used as a spot up shooter, as opposed to one that is heavily relied on as a play-maker, Burke should be able to slide into that same role next season with relative ease. This is especially true since Burke shot 38 percent on spot-up three-point attempts last season, which at this point is his most efficient weapon in his offensive arsenal. 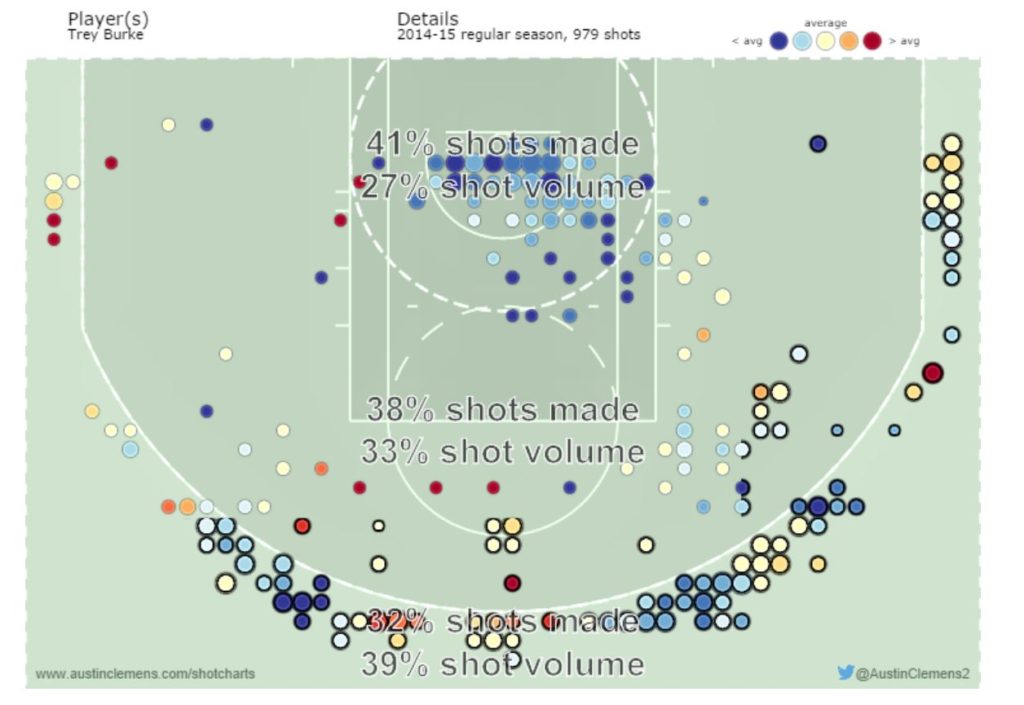 Basketball Insiders’ Ben Dowsett, in an article for ESPN’s Salt City Hoops, recently wrote that shot selection will likely define Burke’s future in the NBA. Dowsett identified some specific areas where Burke struggles, which if avoided could go a long way towards improving his on-court impact. One such example, as Dowsett pointed out, is the fact that Burke shot 194 pull-up jumpers following a pick-and-roll action last season, which was the 11th-most in the entire NBA and that of the 53 players who attempted at least 100 such shots, his effective field-goal percentage was 50th. In addition, we can see in the shot chart above that Burke doesn’t shoot well at the rim, from midrange, or from the top of the three-point line. He also isn’t a good shooter off the dribble (to put it mildly), he struggles scoring in isolation and he often takes shots late in the shot clock. By handling the ball less and being used mostly as a spot-up shooter, Burke can avoid the weaknesses in his game that have caused him to be such an inefficient offensive player.

“I think being a leader has been something natural for me pretty much my whole life,” Burke said. “I’ve been playing [the] point guard position my whole life, so it’s something that I had to pretty much pick up at a young age. I think it was tough as a rookie trying to lead a bunch of grown men, but now, you develop relationships and things like that, so it’s easier to lead.”

Burke will need to utilize his confidence, experience and, as he put it, his developing relationships with his teammates if he is to really take on a leadership position this season. Whether he is able to do so may have more meaning and significance for the Jazz next season than any of the on-court issues and weaknesses in his game discussed above. The third year in the NBA is where we usually see significant growth from young players, so the time is now for Burke to take his game to a new level and establish himself as one of Utah’s leaders.

Injuries are always unfortunate, and hopefully Exum can make a full and speedy recover. However, the silver lining is that Burke now has the opportunity to prove his critics wrong and to show that he can be a key piece for the Jazz.