Bradley Beal of the Washington Wizards will be a restricted free agent this summer. Beal enters free agency at an ideal time considering the fact that the salary cap will rise to an estimated $92 million this offseason and the fact that this year’s crop of free agents is relatively weak.

Earlier this week, Beal made it clear that he expects to receive and sign a max offer from the Wizards.

“I want to be valued the right way,” Beal said to Jorge Castillo of the Washington Post. “I feel like I’m a max player and that’s what I’m looking for. If Washington can’t meet that requirement then I may be thinking elsewhere. I’m pretty sure that they probably won’t [let me go]. At the end of the day, that’s where I want to be. I think a deal will probably get done but you just never know.”

Castillo soon after reported that, according to people with knowledge of the situation, the Wizards will offer Beal a max offer when free agency opens. However, the Wizards, according to Castillo, will look to come to terms with Beal as soon as possible, while holding off on officially signing him in order to maximize their spending power in free agency. This will allow the Wizards to pursue a max-level free agent, like Kevin Durant, while maintaining the right to sign Beal afterwards using his Bird Rights.

Considering all of this, the substantial likelihood is that the Wizards will retain their 22-year-old shooting guard this offseason. The question, however, is whether Beal is worth such a heavy investment at this point in his career.

Before evaluating Beal’s four-year career in the NBA, it must first be noted that not all max-contracts are the same. A max-contract for Beal will look a lot different than a max-contract for a player like Dwight Howard, who has 12 years of NBA experience under his belt and thus can earn a higher percentage of salary relative to the cap. Also, with the cap rising so significantly this summer, we all need to adjust the way we think about player salaries and contracts in general.

A lot of people were shocked with some of the contracts free agents were offered last season. This included players like Al-Farouq Aminu, who was offered a four-year, $30 million contract, and Khris Middleton, who was offered a five-year, $70 million contract. However, both of these deals will seem like relative bargains moving forward with the cap rising and salaries becoming increasingly inflated. The same may be true for Beal’s deal in a few years assuming the cap continues to climb.

The first thing to note about Beal is how young he is. At 22 years old, Beal is one of the youngest top-level free agents in this year’s free agency class. Consider that Beal is just a few months older than Buddy Hield, who will be one of the top overall picks in this year’s draft.

The flip side is that Beal has already dealt with an assortment of injuries in his short NBA career, including injuries to his wrist, back, ankle, nose, toe, shoulder and pelvis. The most concerning injury is a recurring stress injury to his right fibula. This sort of lower-body injury is worrisome for a young player, especially one who hasn’t put a ton of miles on his body. Nevertheless, Beal insists he is past his injury issues.

“I hear about it all time, but that doesn’t define me as a player,” Beal said. “That won’t stop me from growing as a player and it won’t stop me from being who I am. The injury thing, that’s behind me. I’m moving forward. I’m past it. I’m focused on my career from here on out. Hell, Steph Curry was hurt his first four years. Look at him now. John [Wall] was hurt his first three or four years. Look at him now. I’m not worried about it. People are going to say what they want to say. At the end of the day, it’s not going to affect me or the money.”

While Beal insists that his injury history won’t affect the money—which he is probably right about—it probably should. Beal has never played in more than 73 games in his career and averages just about 62 games played per season so far. While Stephen Curry did in fact struggle with recurring injuries earlier in his career, which he overcame, there are others who haven’t been so fortunate.

Eric Gordon was on a similar trajectory as Beal early in his career. He was a promising two-guard who posted similar, and in several ways, better stats than Beal.

An assortment of injuries have plagued Gordon’s career over the last few seasons. He went from being one of the most promising up-and-coming guards in the league to almost an afterthought. Beal will hopefully have more luck than Gordon on the injury front, but Gordon’s story is a reminder that injuries can derail even the most promising of players.

Assuming that Beal can overcome his injury history, there is a lot to like about his game and his future. Beal has one of the smoothest shots in the league, a skill that is at an absolute premium these days. Beal has shot 39.7 percent from three-point range over the course of his career, and has shot over 40 percent from distance in two of his four seasons in the NBA. Also, Beal posted a career-best 54.7 True Shooting percentage last season.

Here is Beal’s shot chart for each of his four seasons in the NBA, which shows, for the most part, an increase in volume and overall accuracy:

Any contract for a player as young as Beal has to contemplate future potential. Though Beal may not be worth every penny he’ll be paid early in his contract, he has the talent and potential to one day outperform a max-contract.

Part of the reason this is true is because Beal is more than just a good shooter. Of course, shooting alone is a very nice skill to have, but being limited to that caps a player as an Anthony Morrow or Steve Novak kind of player. But Beal can do more than just hit shots from distance.

Beal was featured heavily in Washington’s offense last season (25.2 percent usage of possessions), often operating in the pick-and-roll (29.5 percent of the time). Unfortunately, Beal wasn’t exactly the most efficient pick-and-roll ball handler in the league, generating just 0.81 points per possession (59.7 percentile) and turning the ball over 15.7 percent of the time.

Despite mediocre efficiency numbers this season, Beal has a strong handle and good instincts. He looks for easy passes out of the pick-and-roll and then will look for his own offense if none of his teammates are open. The ability to play on the ball allows for teammate John Wall to be used off the ball in creative ways, and gives the Wizards a uniquely talented back court similar to what the Toronto Raptors have enjoyed with Kyle Lowry and DeMar DeRozan.

Also, Beal’s comfort level with the ball helps make him a threat in transition. Beal generated 1.18 points per possession in transition this season and often times threw pinpoint passes to streaking teammates for easy layups. Already having John Wall—one of the fastest players in the league—to lead the break is a nice weapon for the Wizards, but having two guards who can lead the break so effectively is a luxury.

So we know that Beal is a strong shooter, developing playmaker and a nice fit next to Wall, but what about his defense?

Earlier in his career, Beal seemed to have the tools and defensive instincts to become one of the better defensive two-guards in the league. For whatever reason—perhaps injuries—Beal has either leveled out or regressed as a defender. Beal, like Gordon, isn’t the longest defender, but has the strength and athleticism to stick with his opponent and force them into tough shots.

Beal is at his best when defending an opponent in isolation, but struggles at times chasing opponents running through multiple screens. Like many young players, Beal often times loses focus on his opponent for a split second, giving them time to get a step ahead going through a screen, which often leads to an open look. This in part explains why opponents shot particularly well against Beal on three-point looks around the top of the arc this season. 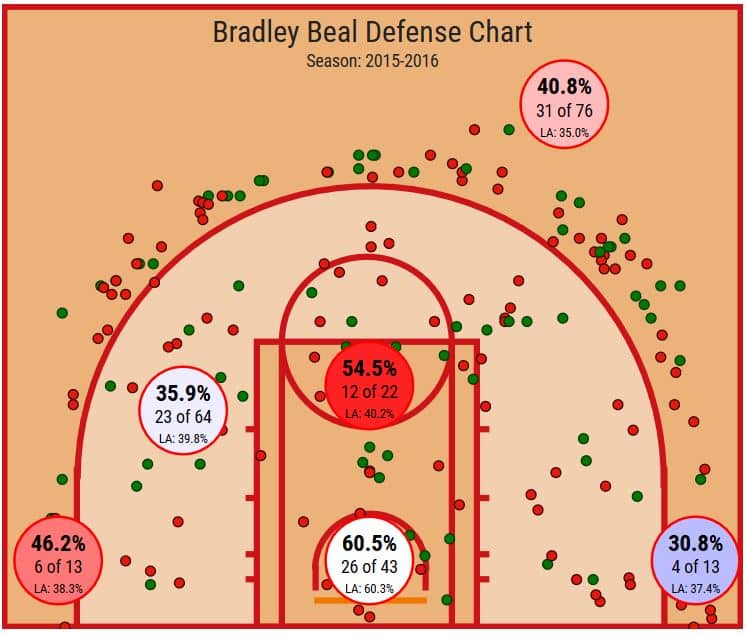 Beal ranked 65th among shooting guards in Defensive Real Plus-Minus this season, falling behind guys like Leandro Barbosa and Vince Carter. RPM on its own is not a sufficient means to evaluate a player’s defensive impact, but it can give some context to how that player performed throughout a single season.

Again, Beal has the physical tools to be a good defender, but he needs to improve moving forward. It’s not clear why Beal regressed so much defensively this season, but the Wizards have to bank on him finding some of the defensive tenacity and instincts he had earlier in his career.

Between multiple injuries and a drop off in defensive impact, Beal, at best, is a risky investment on a max-contract. However, signing Beal to a max-deal this summer is a necessary move for the Wizards considering they can still pursue a top-tier free agent, Beal is still deceptively young, he has significant room to improve and he combines with Wall to make a uniquely skilled and effective back court.

If Beal is right and his injury troubles are mostly behind him, then this contract will look like a decent-to-good investment years from now. But if Beal runs into the same extended issues that Gordon and other players have, then the Wizards may ultimately lament investing so much money in an injury prone player.

All statistics used in this article are current as of May 28, 2016 and are courtesy of Basketball-Reference, StatMuse, NBA.com/stats and NBA Savant.