The Cleveland Cavaliers and Tristan Thompson have been unable to reach terms on a new contract this offseason and with the 2015-16 season right around the corner, the situation is intensifying. Thompson and agent Rich Paul took a big gamble earlier this week by allowing the deadline to pass on accepting the Cavaliers’ one-year, $6.8 million qualifying offer. With the preseason underway and no contract signed between Thompson and the Cavs, the question of whether Thompson is worth the contract he is demanding is more relevant than ever.

Context is everything and determining what annual salary Thompson is worth is a bit complicated. First, by allowing the deadline to accept the qualifying offer to pass, Thompson and his agent sacrificed significant leverage. Now, Thompson does not have the option of playing on a one-year deal and entering next season’s free agency pool as an unrestricted free agent. Instead, if Thompson remains unsigned through March 1, he will still be a restricted free agent next offseason, which means that even if he receives a max-level offer sheet from another team, Cleveland can still match the offer and retain his services (while Thompson misses out on a full season of salary).

Secondly, with the salary cap set to explode after this season, players are earning more annual money than in years past. Paying someone like Kyle Singer $5 million a season is not a bad deal; it’s essentially the new baseline cost for a decent role player. However, paying someone like Enes Kanter a max-level annual salary is widely considered a not-so-good deal, considering his defensive limitations among other things. But in the NBA, bigs get paid, especially with the rising cap (see Ömer Aşık). Third, Thompson will likely play limited minutes this upcoming season with Timofey Mozgov starting at center, Kevin Love returning from a shoulder injury and Anderson Varejão recovering from a torn Achilles. Not to mention the fact that LeBron James just so happens to play power forward from time-to-time and is quite effective at the position.

Thompson and his agent are reportedly seeking a five-year, $94 million deal, which is the max Thompson is eligible to earn. The Cavaliers have reportedly held firm at five years, $80 million. For reference, here are some of the contracts that other notable restricted free agents agreed to this offseason:

Thompson’s contract demand would place him right at the top of this list next to Jimmy Butler and just ahead of Kawhi Leonard. Butler averaged 20 points, 5.8 rebounds, 3.3 assists and 1.8 steals last season, while shooting 37.8 percent from three-point range. Leonard averaged 16.5 points, 7.2 rebounds, 2.5 assists and 2.3 steals while shooting 34.9 percent from beyond-the-arc (and won the Defensive Player of the Year Award). By comparison, Thompson averaged 8.5 points, eight rebounds, 0.5 assists and 0.4 steals last season. Of course, Thompson didn’t play as many minutes per game as either Butler or Leonard, but even Thompson’s per-36 minute averages weren’t jaw dropping: 11.4 points, 10.8 rebounds, 0.6 assists and 0.6 steals. It should be noted that both Butler and Leonard are small forwards, whereas Thompson is a power forward (so it’s not a perfect comparison), but the idea is that these are the stats of the players that received the contract that Thompson is holding out for.

Draymond Green may be a more on point comparison for Thompson considering the fact that he also plays power forward. Green willingly signed for less than a max deal with the Golden State Warriors this offseason after averaging 11.7 points, 8.2 rebounds, 3.7 assists and 1.6 steals and shooting 33.7 percent from distance (and coming in second for Defensive Player of the Year). Green is known more for his defensive versatility, emotional leadership and overall impact than his raw box score numbers, but even his per game averages outpace Thompson’s.

The unfortunate truth for Thompson is that each of these players are more effective in terms of raw production. In fact, there are players that signed for significantly less money this offseason that compare relatively well to Thompson’s per game averages. For example, last season with the Los Angeles Lakers, per-36 minutes, Ed Davis averaged 12.8 points, 11.7 rebounds, 1.8 assists, one steal and 1.9 blocks and had a Player Efficiency Rating of 20. Davis outpaced Thompson in every single statistic per-36 minutes, including PER (Thompson had a 15.6 PER last season) and yet he signed a three-year, $20 million deal with the Portland Trail Blazers. And it is not as though there is some obvious distinction between Davis and Thompson that clearly explains the discrepancy in pay rate like age (Davis is just 26 years old), injury history, character issues or physical limitations.

To be fair to Thompson, it should be noted that box score statistics are a very small part of the overall equation in determining how good or important a player is. However, it is still important, especially in contract negotiations. Consider that Kanter is widely recognized as one of the worst defensive centers in the NBA and yet he secured a large contract based primarily on his notable per game averages. But while Kanter is a defensive liability, Thompson is active and versatile. He has shown a strong ability for containing pick-and-rolls and the mobility to check perimeter players on switches. He also showed potential as a rim protector in the playoffs last season. However, according to Seth Partnow’s Rim Protection statistics for Nylon Calculus, Thompson allowed opponents to shoot 52.5 percent at the rim last season, and registered -0.9 on points saved per-36 minutes, indicating that Thompson wasn’t much of a rim protector during the regular season. So while Thompson is an overall effective defensive player, he isn’t exactly Serge Ibaka.

What Thompson does excel at is offensive rebounding. Thompson grabbed 3.3 offensive rebounds per game last season, which is the fifth most in the league. His ability to gobble up missed shots is almost an offensive scheme on its own and forces other teams to concentrate on boxing him out, which at times prevents them from leaking out for easy transition points.

The problem is that Thompson’s ability to create second opportunities is arguably the most effective part of his offensive game considering his lack of range on his jump-shot. Thompson is also a very good finisher off of pick-and-rolls and is often the beneficiary of a Kyrie Irving or LeBron James lob at the rim. However, Thompson is unable to stretch the floor in any meaningful way and there’s little reason to believe he is going to extend his range any time soon. 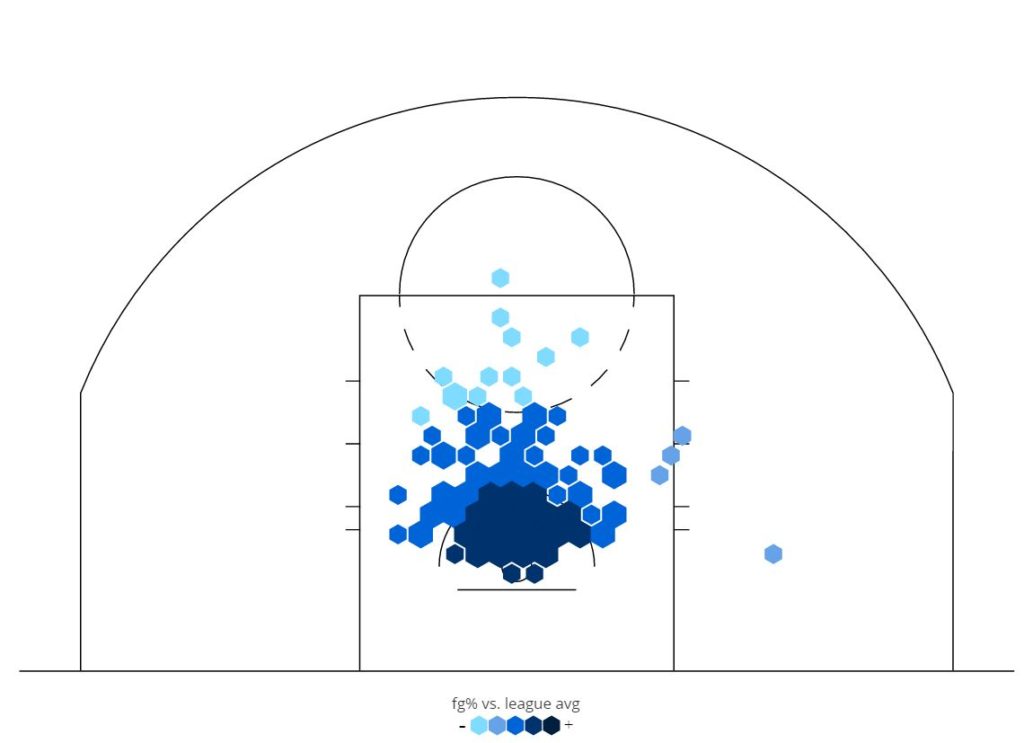 As we can see from the chart above, Thompson’s offensive game is limited to scoring at or near the rim. This is similar to Ed Davis, who again signed for $20 million over three seasons. 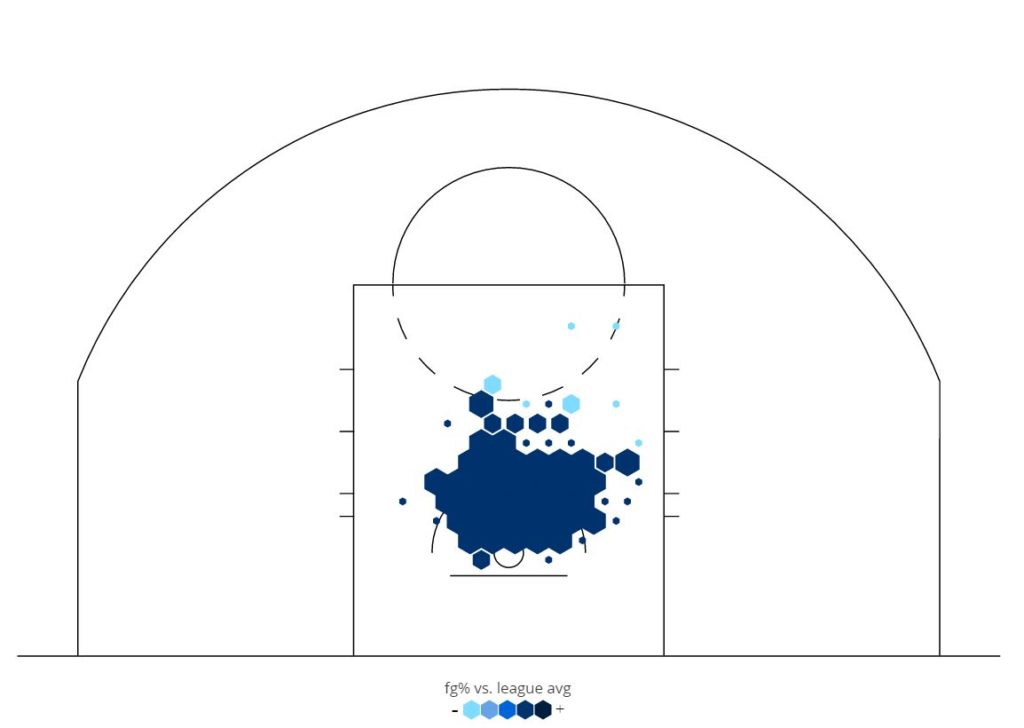 Furthermore, here is the shot chart for Markieff Morris, a young power forward that is able to stretch the floor and is set to make just $8 million per season over the next four years. 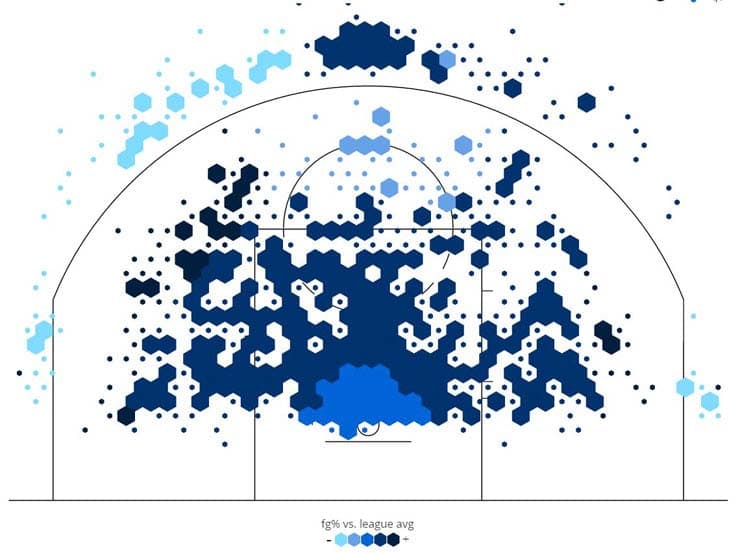 Here we can easily see that Morris is a much more dynamic offensive player and can spread the court for his team. While Morris and Thompson are very different players and excel at different things, the point is that there are other young, talented power forwards that provide significant value, at or near the level of Thompson, and yet weren’t able to land anything close to the money the Cavaliers have already offered Thompson.

Between his rebounding, ability to guard pick-and-rolls, defensive intensity and athleticism, Thompson brings a lot of things to the Cavaliers that aren’t properly represented in traditional statistics. But even if we look toward an all-in-one metric that takes into account less tangible attributes to determine how valuable Thompson is on the court, the result is still the same. For example, Thompson had a Real Plus-Minus rating of just 0.86 last season, which ranked him 116th overall in the league. Put all together, the evidence doesn’t seem to justify giving a max deal to Thompson.

All of this is not intended to diminish how good Thompson is or how important he is to the Cavaliers. With Thompson, the Cavaliers are probably the favorites to the win the title this upcoming season (though the Golden State Warriors and San Antonio Spurs will have something to say about that). Without Thompson, the Cavaliers clearly fall behind the Warriors and would arguably be right in the mix with teams like the Los Angeles Clippers, Oklahoma City Thunder and other second-tier contenders. There is a substantial difference between those two outlooks and that is probably what Thompson and Paul are banking on at this point. While Thompson certainly doesn’t want to see his team flounder on the court without him, there is value in his team showing vulnerability with him off the court. But even this approach is a significant gamble.

If Love comes back 100 percent healthy and starts to mesh with his Cavs teammates more effectively than last season, Thompson’s perceived value to the team could take a hit. This is especially true if Mozgov and Varejão combine with Love to make an effective frontcourt trio. The fact is that Thompson’s value was at its highest after the Finals when he was basically the Cavaliers’ second best player behind James. Without Love and Irving on the court, Thompson showed how dynamic he can be with a bigger role. But that role isn’t going to be there this season and Thompson’s ability to leave the Cavaliers for another team is all but gone at this point now that accepting the qualifying offer is no longer an option.

The Cavaliers have made a significant offer to Thompson and considering his past production, current limitations, what other comparable players have signed for this offseason and his limited role moving forward, it seems to be a fair one. Thompson is a gifted player and will keep improving, but even in the currently inflated NBA economy, it seems as though Thompson should put an end to this holdout and take the offer on the table.