It seems to happen every season. Certain players, teams and story-lines grab our collective attention for specific reasons, which causes us to overlook and under-appreciate other players and teams who are playing at a high level.

Roughly a quarter of the way through the 2015-16 NBA season, the spotlight so far has been on Stephen Curry’s incredible offensive performances, the Golden State Warriors’ still perfect record, a few stand out rookies and Kobe Bryant’s farewell tour among other things. However, while Curry is raining three-pointers on opponents and Kobe is saying farewell to fans, the San Antonio Spurs are, as always, flying under the radar and Kawhi Leonard is casually playing at an MVP-level.

To be certain, Leonard is one of the most talented young players in the league and is widely credited for that. But he’s not as flashy as other players, and purposely avoids the limelight, so it’s easy at times to not notice how well he is playing or recognize how accomplished he already is.

He is a former champion, a Finals MVP and last season’s Defensive Player of the Year. He is recognized by many as being the best wing-defender in the league and is included in any discussion about who the best small forwards in the NBA are today; a list that includes names like LeBron James, Kevin Durant, Paul George, Carmelo Anthony (who is probably underrated at this point) and Gordon Hayward among others. But Leonard has taken another massive step forward in his development this season and isn’t receiving enough credit or attention for it.

The first thing to note about Leonard is his defensive impact. At this point, everyone knows that Leonard is one of, if not the toughest wing-defender in the NBA. He has great length, enormous hands, impressive footwork and he knows that Tim Duncan— who is making a case for Defensive Player of the Year— is behind him protecting the rim, which allows Leonard to play opponents even tighter and further from the basket than he might otherwise. He is so disruptive on defense that a lot of players don’t even feel comfortable dribbling the ball when he’s on them.

As Kirk Goldsberry of FiveThirtyEight broke down for Grantland earlier this year, Leonard is a master at forcing turnovers, which leads to easy scoring opportunities. While Leonard isn’t exactly leading the league in steals this season, his brand of steals are generally more valuable than other players’ since his usually are not created by gambling or jumping passing lanes like Allen Iverson used to do so often. Rather, Leonard usually generates steals by playing tight, fundamental defense, which causes even the best players to make mistakes.

In addition, Leonard is able to suppress the shooting percentages of his opponents, as this defensive shot chart from NBA Savant shows. 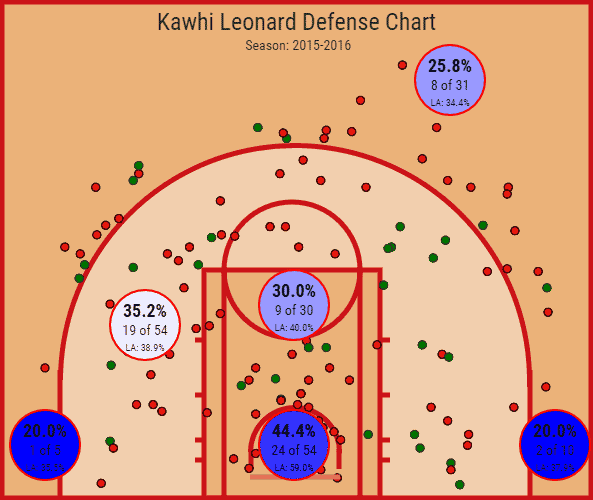 As you can see, Leonard is holding opponents to well below league average shooting percentages in every zone of the court, which is even more impressive when you consider that he is often guarding the best scorers in the league. There is perhaps no better illustration of this than Leonard’s block on Durant from earlier this season, which he makes look easy, but is a play probably only he and LeBron James could make.

It’s early in the season, so it may be the case that Leonard’s opponents’ shooting percentages collectively trend up moving forward. However, we’ve seen in past seasons that Leonard is able to consistently suppress the shooting percentages of even the most efficient scorers in the league, so there is reason to believe this is sustainable. The Spurs are currently playing historically great defense, holding opponents to a league-leading 92.2 points per 100 possessions. It makes sense when you consider that the Spurs have three ace-defenders in Leonard, Duncan and Danny Green. But we could have reasonably expected a drop-off from the Spurs defensively considering Tiago Splitter is no longer on the team, Duncan is a year older and LaMarcus Aldridge isn’t exactly noted for his defensive impact. Nevertheless, the Spurs are the best defensive team in the league by far this season and Leonard is a huge reason why.

While Leonard continues to be arguably the best wing-defender in the NBA, it’s actually his offensive game that has taken a major leap this season. Through 19 games, Leonard is scoring 23.2 points per 36 minutes, up from 18.7 last season. He is currently ranked 13th in the league in points per game and is ahead of notable scorers like Jimmy Butler and Kyle Lowry. This is significant considering that one of the biggest criticism of Leonard’s game was the fact that he hasn’t been a go-to-scorer in past seasons, but rather a cog in the Spurs’ efficient offense. That isn’t the case anymore, however. And the best part about his increased offensive production is that unlike other scorers, Leonard’s offensive-efficiency has increased despite the fact that his role and usage percentage have increased, which isn’t very common.

How efficient has Leonard been on offense this season?

Well, he’s currently shooting 51.3 percent from the field, 50 percent from three (on 4.1 attempts per game) and 86.6 percent on free throws, good for a 61.1 True Shooting percentage. Simply put, he is taking efficient shots and is shooting lights out. To give some additional context to this, Carmelo Anthony is tied in per game scoring with Leonard, however, Anthony is taking 2.1 more shots per 36 minutes and has a 30 percent usage rate, compared to just 25.7 for Leonard. Leonard is using less possessions and taking less shots, but is still scoring as much as Anthony, who is regarded as one of the elite scorers in the league.

If it still isn’t clear just how much Leonard has improved offensively, we can simply look at his shooting chart this season and compare it to last season’s.

As we can see, Leonard is shooting the ball extremely well at the rim and from the three-point line this season. In fact, Leonard is leading the league in three-point percentage and is doing so on a healthy 4.1 three-point attempts per game. Leonard is shooting roughly 15 percent better from distance this season than last, which is insane and of course unsustainable. But with so many open looks being generated by the Spurs’ efficient offense and an improved jumper, Leonard can likely manage to shoot around 40 percent from three-point range throughout the season, which is still an impressive mark. In his most recent outing, Leonard went off against the Memphis Grizzlies, hitting seven three-pointers on nine attempts.

The one knock on Leonard’s game at this point is the fact that he is only logging 2.6 assists per game, which pales in comparison to other versatile small forwards like Paul George and LeBron James. But that is more likely a function of Leonard’s role within the Spurs’ offense rather than him lacking the ability to be a primary play-maker for his teammates.

Aside from this, there are no more weaknesses in Leonard’s game, there are no more qualifications. Right now, he is arguably the best two-way player in the league and affects the game in more ways than just about anyone not named Stephen Curry. To be sure, right now this is Curry’s league and he is currently the run-away favorite to win MVP. But there is a reason why Basketball-Reference’s MVP Tracker (which “ranks candidates based on a model built using previous voting results”) ranks Leonard second in this year’s MVP race. He is playing the best ball of his career and is impacting the game in ways that go beyond basic statistical output.

Lastly, let’s not forget that Leonard is still just 24 years old, which means he still has plenty of room to keep getting better. Now that’s a scary thought.