With every agonizing tick of the clock, Shaka Smart—the Virginia Commonwealth University head coach—saw his team’s bid at a conference championship looking all the more improbable.

The directive to double-team senior guard Langston Galloway and force the ball out of his hands made all the sense in the world, especially since Galloway had hit the go-ahead three-pointer for his Saint Joseph’s Hawks on the prior possession.

When the double-team came five feet behind the three-point line, Galloway drove right and then left, desperately trying to evade Juvonte Reddic and Jordan Burgess, but to no avail.

Out of the corner of his eye, Galloway saw the surprisingly dependable freshman on the wing, and when Galloway whipped a line-drive pass to DeAndre Bembry, without hesitation, the freshman executed a picture-perfect pass into the interior to Ronald Roberts, Jr.

As Roberts, Jr. rose and threw down a thunderous dunk, the Hawks pushed their lead to five points in the game’s waning moments.

At that moment, Bembry and Roberts, Jr. embraced at half court. They knew that, as a fourth seed, they were pulling off an improbable upset here at Barclays Center in Brooklyn, New York.

And as the St. Joseph’s Hawks walked away from the 2014 A10 Championship game having emerged the victors over the conference’s second seed, Bembry knew that his team had overcome the odds.

For the Charlotte-born prospect, though, this was nothing new—Bembry had been defying expectations for quite some time.

Entering play on January 31, Bembry, now in his third year at St. Joseph’s, is averaging 16.9 points, eight rebounds and 4.5 assists for the 18-3 Hawks. After the aforementioned Langston Galloway went undrafted after declaring for the NBA back in 2014, he has slowly but surely chiseled a place out for himself in the NBA.

Indeed, 30 teams passed up on Galloway two years ago, and it can’t help but to make you wonder whether many of those teams will make the same mistake again with Bembry, who is currently projected as a late second round pick.

“I do feel that I’m very underrated, but it makes you work harder and it pushes you, especially if you’re playing a player that they have ranked in front of you or something like that,” Bembry told Basketball Insiders. “I’m already motivated to play the game of basketball by myself, but little things like that can just add on to your passion for the game or why you actually wanna succeed.”

And as Bembry ran off a list of players who entered the league with little fanfare, attention or expectations of greatness—a list that includes Stephen Curry, Damian Lillard and Draymond Green—he takes it all in stride.

“You gotta get it how you have to,” Bembry said. “Draymond Green, he’s a great player, he has a very high basketball I.Q. and he can do a lot of things. He can defend, shoot the ball and pass the ball and I feel like if you have a good head on you, you should be alright.”

For Bembry, Green represents a contemporary whose story is remarkably similar. Green wasn’t the hottest recruit, and at just 6’7, questions arose about whether and how he would succeed at the next level. Though versatile, the fact that Green didn’t fit into the traditional mold of a positional basketball player proved detrimental to his draft stock. He was famously chosen with the 35th overall pick of the 2012 NBA Draft. Today, he happens to be a near maximum-salaried player who is deemed one of the most important pieces of the defending NBA Champions.

Green has always kept a cool head about it, though, and so is DeAndre Bembry.

Citing Dirk Nowitzki, Kevin Durant, James Harden and Larry Bird as players whose moves he tries to emulate, Bembry stresses that making what he calls “winning plays” is the highest priority—not the chase for empty numbers. 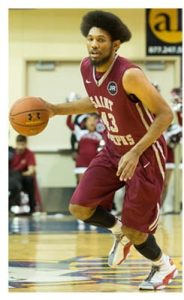 “Some people may not agree, but I really feel like that’s the way you should play basketball, making the winning plays,” he said. “I always had this type of I.Q. with basketball where I just like making the winning play, I don’t have to score it. If I’m out there just playing my game and not having to force 14 shots or anything like that, that’s when I’m at my utmost comfortable position on the court. When I can take my time, make the right play, take my time to get the right shot that I want to take—not what the defense wants me to take—that’s when I play my best.”

Still, success at the next level, the junior knows, will only be achieved if he continues to toil and improve every facet of his game. What may separate him from his peers, however, is his willingness to play a role—just like he has at St. Joseph’s—in the pursuit of winning. In today’s NBA, where advanced statistics and wins and losses determine value more than simple statistics, he seems to be a rare breed—a promising young player who sees the bigger picture.

“I know how to play a role and a lot of people don’t know how to play roles,” Bembry told Basketball Insiders. “A lot of people just know if they’re a scorer, then all they’ve gotta do is shoot. That’s why I’m so different from a lot of players. A lot of players can only do one thing but I feel like I have all types of keys to my game where you can throw me out there… I feel like just playing a role and knowing your role is something that a lot of college guys and people in general just can’t do, but I feel like that’s something that I can.”

Anyone who has a conversation with Bembry will recognize his confidence fairly quickly. Over his three years playing for head coach Phil Martelli at St. Joseph’s, he has been asked to play different roles and has already proven to be a somewhat versatile player.

Going from being an auxiliary piece to a primary scorer to a mixture of the two has been a challenge for Bembry, but it pales in comparison to the challenge that the young guard face around his 17th birthday—relocating from the quiet South to the congested North.

“The pace was a lot faster,” Bembry recalls of his family’s move from North Carolina to New Jersey prior to his third year of high school. “Especially being from down South and from the country, it was a much faster pace.”

And back then, back in 2011, is when Bembry first began to believe that he could succeed at the highest level. It seemed that fairly quickly, he went from playing AAU basketball to dominating older varsity players as a sophomore at Rocky River High School in Mint Hill, North Carolina. In the blink of an eye, Bembry suddenly found himself working out at the storied Oak Hill Academy in Virginia before rubbing shoulders and playing hoops with the likes of Kyrie Irving and Michael Kidd-Gilchrist at St. Patrick’s in New Jersey.

“Where I’m from, I went to a normal, regular public school and then switching over to a St. Patrick’s was one of those types of things, it was just something I wasn’t used to,” he said. “It was the first time I was seeing so many players who are so good on one team instead of it just being all about me.”

“It was really just a good experience,” Bembry said of those early workouts. “When I came to St. Patrick’s, Kyrie Irving was there playing with us and Michael Kidd-Gilchrist came back and played with us… It was just another thing that was eye opening for me,” he said.

And since then, Bembry has dedicated himself to developing both the mindset and skill set of a player who prides himself on making, again, what he refers to as the winning basketball play.

Deeming himself a point guard, Bembry’s impressive size—he stands about 6’6’—would give him an immediate advantage over most of his opponents if he were to play lead guard in the NBA. However, some scouts would caution that his position at the next level is still not set in stone. There were once similar reservations about Draymond Green, though, and as the NBA has moved toward position-less basketball over the past five years or so, Bembry’s prior experience of playing all five positions in high school should continue to pay major dividends.

With the calendar turning to February, the NCAA Tournament and Conference tournaments are rapidly approaching. St. Joseph’s enters play on January 31 as the third seed in the conference and head coach Phil Martelli and senior Isaiah Miles do so knowing that Bembry will be out there with them.

They also will have the comfort of knowing that when it all comes down to a split second decision in a decisive moment—as Bembry proved to Langston Galloway and Ronald Roberts, Jr. in the 2014 A10 Championship game—he can be counted upon to make the winning play.

From North Carolina, to New Jersey and to Pennsylvania, Bembry has long made a habit of not seeking personal accolades. Even as he continues to pursue his career goals and prepares to make a probable declaration for the NBA Draft, he always puts his team first.

In today’s NBA, perhaps more than ever, that’s bound to get noticed, sooner or later.