As the final minute on the clock ticked away, the fans in attendance were singing in unison.

The upset was complete.

In the end, it took all of only six games for Dwight Howard and his Orlando Magic to shock the NBA world. As LeBron James, Mo Williams, Zydrunas Ilgauskus and the rest of the 66-win Cleveland Cavaliers wondered what had become of their championship journey—as they wondered how and why it had ended so abruptly—Howard untucked his white jersey, found the game ball and walked around the court with his signature smile on full display.

The 23-year-old had just earned his third consecutive All-Star berth, and at that moment, as he embraced Hedo Turkoglu, Rashard Lewis and Rafer Alston, he knew that he was leading his team to the franchise’s first NBA Finals berth since 1995.

Bigger and better things seemed to be in store for Howard, Stan Van Gundy and the Magic team that had improbably used a blitzkrieg of three-point shots and stifling interior defense to send James home empty handed.

And back then—almost seven years ago—it was impossible to imagine that we had already seen Dwight Howard at his finest moment.

“I’m just looking forward to the challenge of playing in a tough Western conference and seeing what we’re made of,” Dwight Howard said.

“I think last year, we had an unbelievable season.”

And as we sit and watch and listen to Howard on October 1—the day he begins a championship journey for the 12th time in his career—he is obviously wiser and obviously a little bit older than his 2009 self.

His appearance, his tone and his humbled demeanor are all indicative of a universal truth about life in the National Basketball Association: moments often define careers.

It seems like just yesterday that Courtney Lee missed that critical layup at the buzzer of Game 2 of the 2009 NBA Finals. And as Howard addressed the media in Houston last week—almost seven years later—we can all only imagine how different life would be for him and his legacy if that shot had fallen.

Could Howard have found a way to lead his Magic past Kobe Bryant?

Would he ever have had an epic falling out with Van Gundy?

Would he have ultimately sought greener pastures?

We can never know for certain, but we could all certainly make an educated guess.

As Howard begins his 12th season, he is closing in on his 30th birthday now. The once lanky and scrawny kid is long gone. The wildcard that the Magic selected with the first overall pick back in 2004—the high school kid that the franchise opted to make its cornerstone over Emeka Okafor—is no longer here. What we see before us, instead, is just another player who has failed to live up to the mighty potential that we once saw in him.

Immaturity, indecision, injury—three words that, over the years, have come to define Howard quite well. 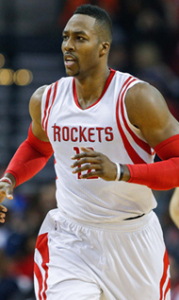 When the Lakers paid a king’s random for what ultimately ended up being just 76 games of a less-than-stellar version of Howard, general manager Mitch Kupchak did so believing that he was acquiring the league’s most dominant force. Since then, Howard has been anything but.

For general manager Daryl Morey, the decision to roll the dice on Howard was an easy one to make. Although James Harden had risen up to become one of the more improbable success stories this league had seen in some time, it takes three to tango in the mighty Western Conference. Despite what seemed to be a diminution in effectiveness, Howard still seemed to be the perfect complement to Harden. In flashes, that has seemed to hold true.

The truth, however, is that Harden was able to capably lead the Rockets toward the top of the Western Conference last season despite only having Howard for 41 games during the regular season. That the team was able to surprisingly find a recipe of success without Howard is a testament to Harden’s greatness as a player, his supporting cast’s ability to win basketball games and coach Kevin McHale’s chops as a game planner.

As we watch Howard and see only flashes of his 23-year-old self—as we watch him and see him appearing to be a step slower and his timing slightly off—we can only wonder what he and Harden could have produced had they been paired at the right time.

Certainly, it is that hope and those lofty expectations that Howard will carry into the regular season. Together, Morey and McHale know that a fully healthy Dwight Howard can help to carry the Rockets to heights not seen by the franchise in more than 20 years.

The only question we have now is whether or not Howard—this 30 year old version of him—has already shown us the best of him.

“I’m really looking forward to an unbelievable season,” Howard said to the assembled media in Houston.

“If we stay healthy, we focus everyday in practice on getting better, we have a great shot at winning the championship.”

Howard downplayed the questions about his impending free agency and the salary cap increases that will be forthcoming over the next two years.

Here and now, all that matters to Howard is becoming a better leader and having what he expects will be an unbelievable season. Although he may not have said so directly, like Chris Paul, Howard seems to know that he doesn’t have forever in this league. Howard himself believes that he can play 10 more years, but as he looks around, he sees the league getting younger, faster and more skilled. It cannot be lost upon Howard that, at this point, many would cite Blake Griffin, DeMarcus Cousins and Anthony Davis as being better big men than him. It also cannot be lost upon him that the defending champion Golden State Warriors seem to have youth on their side. The San Antonio Spurs have ensured that their championship window will remain ajar with Kawhi Leonard and LaMarcus Aldridge on board, and the Los Angeles Clippers—the team that the Rockets shocked last season—will be out for blood.

Howard seems to know that tomorrow is no longer promised.

Almost seven years after Howard made his first and only trip to the NBA Finals, the hope for everyone affiliated with the Rockets organization is that we have not already seen Howard at his finest moment.

Sure, they have lost some talent, but with Ty Lawson sharing playmaking duties with Harden, and Howard feeling the best he has felt in a long time, he cannot help but to show his excitement for the coming season when asked about the front office acquiring Lawson.

“For me, he’s great,” Howard said. “A guy coming off the pick-and-roll, just throwing it up. He can penetrate and get to the basket and score. He just adds a dynamic to our team that I think we needed. I think it’s great for us.”

What would also be great for Harden, McHale and everyone that roots for the Rockets would be for Howard to turn back the clock.

Once upon a time, Dwight Howard seemed to have the keys to the NBA in his hands. No amount of weight seemed too great for his mighty shoulders. The unfortunate fact, though, is that in the National Basketball Association, if you find yourself still searching for something seven years after it was last seen, you are likely searching in vain.

Quietly, as he has escaped the same criticism as some of his peers—LeBron James, Chris Paul and Carmelo Anthony immediately come to mind—I am here to remind you that we once believed that Dwight Howard was on his way to immortal greatness, as well.

Still, in it all, what Howard will ultimately be measured against and remembered by is the number zero—the amount of times he had been able to lead a team to the promise land. Fair or not, that is the mandate for Goliath, especially after he once seemed to have the NBA world at his feet.

And as Howard walked off of the podium having officially begun the 2015-16 title chase—closing in on his 30th birthday, with the weight of expectations and the lost opportunity of those 2009 NBA Finals driving him—he hopes that this can finally be his year.

In Houston, the ascent has begun, but with the Western Conference getting tougher by the day, it is only with the 2009 version of Howard that there will be sustained flight. Toward the celestials, the wiser Howard hopes he can help steer this Rocket ship.

With James Harden serving as captain and Howard hoping to simply be an effective co-pilot, here and now, the countdown begins.