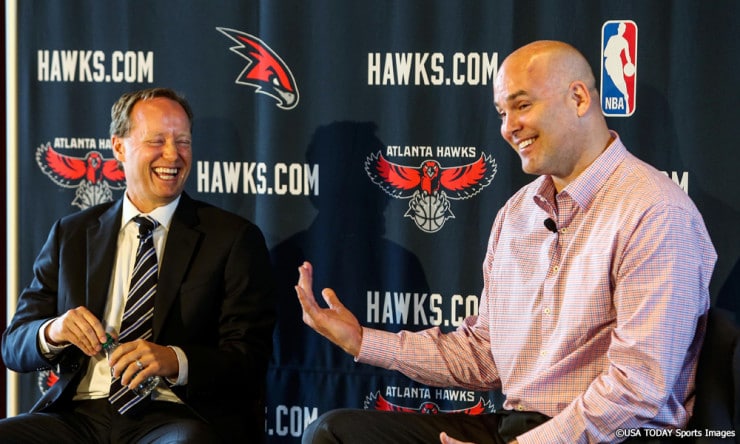 Anthony Chimes in on the Controversy in Atlanta

It has been a rough week for the Atlanta Hawks, who are currently shrouded in a controversy that has captured the collective attention of NBA fans and the media. For anyone who has not been keeping track of the situation in Atlanta this last week, here is a quick recap:

On September 7, the NBA announced that majority Hawks owner Bruce Levenson would sell his stake in the team after it was discovered that in 2012 Levenson authored an insensitive email regarding African-American Hawks fans, theorizing, among other things, that “the black crowd scared away the whites and there are simply not enough affluent black fans to build a significant season ticket base.” It initially seemed like the NBA had masterfully handled the situation by dealing with Levenson behind closed doors and convincing him to sell his interest in the Hawks, rather than fighting in court the way Donald Sterling did earlier this offseason. But then Adrian Wojnarowski of Yahoo Sports reported that in June, Hawks general manager Danny Ferry made racially-charged comments about then free agent Luol Deng during a conference call with top ranking Hawks officials and owners, which prompted the Hawk’s internal investigation that uncovered Levenson’s email. Wojnarowski subsequently released a partial transcript of the conference call that included some of Ferry’s inflammatory statements about Deng, such as “he’s not perfect, he’s got some African in him” and comparing Deng to a store owner who sells counterfeit goods. Ferry claimed that he was reading from a scouting report on Deng, and that the controversial words were not his own. In response, Deng released a statement regarding Ferry’s inappropriate comments, expressing his disappointment and reaffirming his pride in his African heritage.

On September 11, The Atlanta Journal-Constitution released an audio clip of the conference call in which it seemed Ferry was providing his own observations rather than reading verbatim from a scouting report. The next day, WSB-TV in Atlanta released the scouting report that Ferry claims he read from, which showed that the comments regarding Deng came from a former member of the Cleveland Cavaliers front-office. Then, on Friday, Ferry released a statement announcing that he would take an indefinite leave of absence from his position.

As each day has passed, the situation in Atlanta kept worsening. It didn’t stop on Saturday either, as star forward Carmelo Anthony told reporters at his basketball camp in New York that Levenson’s and Ferry’s comments will adversely affect the Hawks in regards to recruiting players moving forward.

“[There] ain’t nobody [who] would want to go there,” Anthony said. “At the end of the day, Atlanta, I think it puts Atlanta back even further now, from that standpoint.

“As a player, as an athlete, we’re looking for a job, we’re trying to find a place where we can move our family, we can make our family comfortable, where we can be comfortable in a comfortable environment,” Anthony said. “But those comments right there, we would never look at [playing there].

“I’m speaking on behalf of all athletes. We would never look at a situation like that, I don’t care what it is.”

Anthony’s statements are the strongest from a star player since the beginning of this controversy. Several players have voiced their displeasure with Levenson and Ferry, but Anthony went a step further by stating that free agents will now shy away from going to Atlanta in light of these recent events. Anthony may have had extra incentive for chiming in on the matter, however, as Ferry mentioned Anthony during the conference call as well, stating that though Anthony is a good shooter, “he can screw you up in other ways,” and that he doesn’t come “without some risks.” But even if Anthony had some extra incentive for stating his harsh words, they still carry weight and may be an accurate representation of how other players around the league feel. If it is an accurate representation, the Hawks have a serious problem on their hands moving forward.

The Hawks entered this offseason with a significant amount of cap space, but only made minor moves like adding Thabo Sefolosha and Kent Bazemore, and re-signing Shelvin Mack, Mike Scott, and Elton Brand. Atlanta targeted more significant players, like Deng, but missed out on signing the bigger free agents. Atlanta missed out on adding big free agents last offseason as well as Chris Paul and Dwight Howard opted to return to their teams rather than potentially teaming up together in Atlanta. But to be fair, a lot of teams missed out on signing either Paul or Howard. Nevertheless, before this controversy Atlanta was not considered a destination franchise like the Los Angeles Lakers, and this situation only makes things worse. But as Anthony pointed out, the issue is with management, not the city of Atlanta itself.

“Atlanta is a great city, a great market, great people, great atmosphere,” Anthony said. “But as far as the comments [that] were made, I think it was uncalled for. From an owner, from a GM, those are not things you play with.”

It remains to be seen whether other players will actually endorse Anthony’s position, especially considering that free agent big man Elton Brand re-signed with the Hawks earlier this week on Wednesday, well before Ferry announced he would be taking a leave of absence. Brand may not be a marquee player at this point in his career, but there were other teams vying for his services, and Brand still opted to return to Atlanta in spite of the controversy surrounding the team.

Also, consider that for years, players and coaches have freely signed with the Los Angeles Clippers knowing, to varying degrees, that former owner Donald Sterling has a history of discrimination, including accusations by federal prosecutors that he refused to lease Beverly Hills apartments to African-Americans. But, as we have learned with the Sterling, and now the Ray Rice situation, sometimes it takes hard, undeniable evidence before any real action is taken. And in Atlanta’s case, the evidence is already out there.

The full effect of this controversy remains to be seen, but Anthony is right that this situation is a significant step back for the Hawks and that it will take time to get past this.

Hawks CEO Steve Koonin, in a letter apologizing to Hawks fans, admitted that this situation goes beyond a few isolated incidents.

“We know enough today, based on investigations conducted by the league, by external legal counsel on behalf of the team, and information that has appeared in the media, that our shortcomings are beyond a single email, a single person or a single event,” Koonin said. “To the contrary, over a period of years, we have found that there have been inflammatory words, phrases, inferences, and innuendos about race. We as an organization did not correct these failures. We did not do the right thing.”

As we recently saw with the Clippers, situations like this can be overcome. Hopefully the Hawks can turn this situation around quickly so everyone, especially Hawks fans, can start focusing on the team and the upcoming season, instead of the comments that team officials make behind closed doors.

Anthony Davis, Kenneth Faried and Klay Thompson have been the standouts for Team USA throughout the tournament and will be relied on to get past the resilient Serbia national team. Before the tournament started, analysts confidently predicted that Team USA would face Spain in the final for the World Cup, but France upset Spain in the quarterfinals, and subsequently lost to Serbia in the semifinals.