Home » news » Nba Sunday Will The Sixers Turn It Around

It’s amazing how long ago 2012 seems. Paul Pierce, Kevin Garnett, Ray Allen and Rajon Rondo were all still members of the Boston Celtics and LeBron James was still looking for his first NBA championship.

We still thought that James Harden was not a max player and that the Golden State Warriors—who were built around David Lee and Monta Ellis—would improve upon the 23-win season that they turned in.

And yes, back then, the Philadelphia 76ers seemed to be a team on the rise.

With a new ownership group purchasing the team in July 2011, people immediately started questioning the core that the team had assembled. Elton Brand, Jrue Holiday, Evan Turner, Thaddeus Young, Andre Iguodala and Lou Williams all seemed to be productive players in their own right, but how far could that group really go?

A quick start to the lockout-truncated 66-game season assuaged concerns in the immediate term, and scoring the “upset” over the Derrick Rose devoid Chicago Bulls in the first round of the 2012 NBA Playoffs seemed to be a promising omen. But since losing to the Celtics in the second round of the playoffs that year, the Sixers began a slow and steady decline and a rebuilding project which is now entering its fourth year.

Now, it is fair to wonder when, or perhaps if, Sixers fans will begin to see dividends from the great divestment.

On the day of the 2012 NBA Draft, Moe Harkless let it be known that he wished to be referred to by his birth name—Maurice. When the Sixers selected him with the 15th overall pick in the draft, he was seen as a sensible selection that would help the team get younger and deeper in the immediate future.

Little did we know that his selection was the first of many moves that would alter the course of many careers and the course of the franchise, as a whole.

Shortly after the 2012 draft, the Sixers amnestied Elton Brand, ultimately deciding that they would rather pay him to walk away than pay him to play. The decision was certainly justifiable, but the free 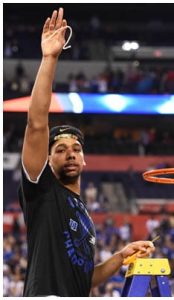 agency departures of Lou Williams and Jodie Meeks were eventually followed by the Sixers opting to stake their fortunes on Andrew Bynum.

Shortly after Williams and Meeks left the franchise, the Sixers opted to send out the aforementioned Harkless, as well as Nikola Vučević, franchise mainstay Andre Iguodala and a future first round pick in exchange for Jason Richardson and Andrew Bynum.

The core of Jrue Holiday, Thaddeus Young, Evan Turner, the recently acquired Bynum, Richardson and Nick Young (who was signed as a free agent), didn’t amount to much. Head coach Doug Collins resigned at the conclusion of the 2012-13 season when the Sixers finished 34-48. It was shortly thereafter that Sam Hinkie—who was installed as general manager in May 2013—opted to trade Jrue Holiday to the New Orleans Pelicans for the pick that eventually became Nerlens Noel.

In the two seasons that have passed, the Sixers have won a total of 37 games and, on many nights, have failed to even resemble a respectable NBA team. After seeing Michael Carter-Williams come and go, the franchise seems to finally be putting together some semblance of a nucleus, but to all fans and franchises that advocate for tearing a team down and starting all over, at least to this point, the Sixers should be considered a cautionary tale.

Stockpiling assets and draft picks can certainly be a catalyst to winning in the NBA, but a team still needs prudent and diligent scouting and talent evaluators if it is to have any hope of eventually emerging as a contender. In this regard, the San Antonio Spurs are truly unique.

Over the years, without undergoing as dramatic or seismic of a rebuild as the Sixers, the Spurs have consistently acquired young pieces with late draft picks and sometimes, as free agents, who have proven to be difference makers on the NBA level. A non-exhaustive list of active players who fit the description are Gary Neal, Danny Green, George Hill and Cory Joseph.

As the Sixers look back at the failed experiment of Andrew Bynum and Jason Richardson and marvel at how seamlessly the 2015 Bill Russell NBA Finals Most Valuable Player Andre Iguodala fit into and contributed to a winning culture as a member of the Golden State Warriors, it is only fair to question whether the brain trust in Philadelphia made the best choice in opting to tear down what was a competitive team.

The situation is eerily reminiscent of the crossroads that Masai Ujiri and his Toronto Raptors found themselves at, though Ujiri ensured that the franchise took a different course of action.

In May 2013, Ujiri was named the NBA Executive of the Year for his part in assembling the 2012-13 Denver Nuggets who managed to put together a 57-25 season, even without Carmelo Anthony.

Ujiri would eventually be hired to replace the departed Bryan Colangelo as the general manager of the Toronto Raptors and as Sam Hinkie had done in Philadelphia, many were expecting Ujiri to replace head coach Dwane Casey with a coach of his choosing. Nobody would have been surprised if, like Hinkie, Ujiri had gone on an all-out fire sale, shipping DeMar DeRozan, Kyle Lowry and Jonas Valančiūnas to the highest bidders and tanking the 2013-14 season in order to give the Raptors the opportunity to win the draft lottery and select Andrew Wiggins with the first overall pick in the 2014 NBA Draft.

As the team arrived in early December, some chemistry issues had arisen. Rudy Gay would play his final game for the franchise on December 6, 2013 and was traded to the Sacramento Kings on December 9. At 6-12, the Raptors seemed to be missing something, so Ujiri opted for addition by subtraction. The team responded by going 10-3 over their next 13 games and would prove that the winning streak was no aberration.

With a newfound dedication to attacking the basket and wise shot selection, Ujiri would resist overtures from other NBA teams looking to poach his talent and, instead, build. The Raptors would go on to finish the season as the Atlantic Division Champions and, at 48-34, accomplish the best regular season record in franchise history. The next season, they would again repeat as division champions and break the record set the previous year by winning 49 games.

Now, as we embark upon the 2015-16 NBA season, the Raptors are still managed by Ujiri, still coached by Casey and are still built around Lowry, DeRozan and Valančiūnas. Now, with DeMarre Carroll in the fold, it should not surprise anyone for the Raptors to continue their dominance of the Atlantic Division and set a new regular season win record.

Whether or not the Raptors can contend for the NBA Championship is up for debate, but do recall that you would be hard pressed to find someone who believed that the Golden State Warriors would be entering this season as defending champions, as well.

To put it simply, you have to be in it to win it. Ujiri saw potential in his roster and opted to commit to it and build with it. Even if Toronto does not have a championship, it at least has a championship contender, and in the world of professional sports, that’s worth something.

As we look back at the past three seasons, ask yourself: what have the fans in Philadelphia gotten?

To Sam Hinkie’s credit, with Jahlil Okafor, the Sixers seem to have gotten their hands on a “can’t miss” prospect who I expect to emerge as the Rookie of the Year. If Nerlens Noel can remain healthy and if Joel Embiid can ever get healthy, then the franchise would certainly have a formidable triumvirate patrolling 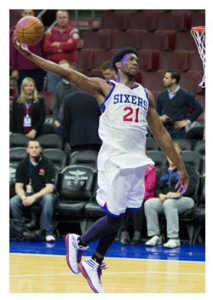 the paint. Whether the pieces fit or whether those three could actually flourish together is another question for another day.

The question for today, for me, is whether the Sixers are any closer to being a contender than they were when they pulled the plug back in 2012 and at what point they will take a step forward? Certainly, the treasure chest of draft picks and copious amounts of cap space are good assets to have, but at some point, the talent needs to begin to mesh and the cap space needs to be wisely utilized to augment the pieces on the roster.

As I look at the 2015-16 Sixers, I see a talent-laden team that should finally show some signs of returning to the status of legitimate NBA competitor.

Isaiah Canaan flew under the radar for most of last season and the sharpshooting Canadian Nik Stauskas should have no issues playing with and off of Okafor, so long as Stauskas recovers from the right tibia stress reaction that is expected to keep him out for a few weeks.

For the first time since these Sixers upset the Chicago Bulls in the first round of the 2012 NBA Playoffs, there is some reason for optimism.

At this point, though, it is still fair to question whether the franchise is better off. What we see transpire on the court this season may go a long way toward answering that question.