There are disappointments, and then there are the 2015-16 Washington Wizards.

“Those things happen, we’ve been there before the last couple years,” head coach Randy Wittman said of the fact that, after a slow start, his team sits at 14-14 and with the 11th seed in the Eastern Conference.

“It’s not gonna be easy for 82 games and you’re gonna go through difficult times.

“You’ve gotta stay fighting whether it’s through injuries or bad play or running into tough opponents who are playing their best basketball of the year. You’ve gotta just say with it. … You can’t give in to it when things are a little bit tough.”

“Tough” would be an appropriate word to describe both John Wall and rookie Kelly Oubre.

Together, the two may have saved the season.

Entering this season, Otto Porter was being counted on to prove that his performance over the course of the latter portion of last season was the signifying of a coming out party, not merely catching lightning in a bottle. But 28 games later, there still are some questions to be answered.

And as Porter has had some of the high-highs and low-lows that one would expect from a player still trying to find his place on a team with a lot of talent, in what seems to be a recurring theme, Bradley Beal is currently sidelined after falling victim to a stress reaction in his lower right fibula.

With the team falling to three games under .500 a few weeks ago, things looked rather bleak, but then, something miraculous happened. Coach Wittman insert rookie Kelly Oubre into the starting lineup and the team ran off a season-high four straight wins. Now back at .500, though, there is still a lot of work to be done.

“Nobody’s satisfied in this locker room,” Oubre said. “Everybody knows what we are capable of, on paper. It’s up to us to go out there and do it. We all want a championship, we all want one and I’m hungry for one, as well, so we are all not satisfied and we’re all just hungry to work.”

During the predraft process, Oubre impressed with his length and versatility. What was most inspiring about him, though, was his confidence. Oubre holds his head high when speaking and is both outspoken and articulate. The product of all of that is a player who comes off well in public and one who certainly seems to have the mental requisites—intelligence, patience and confidence—to succeed in the NBA.

Perhaps that’s what caused the Wizards to fall in love with him in the first place.

“I’m just trying to get my feet wet and make sure that I’m getting on the right track in this league,” Oubre said when asked how difficult it has been for him to manage the expectations of a team coming off of a 46-win regular season.

“It’s definitely a process for me. Day-to-day, game-to-game, practice-to-practice, I’m just trying to get better, trying to be the best I can be individually so I can help my team. We’re gonna be great, we’re gonna receive all the praise that we deserve, we just gotta keep working.”

Through the end of January, the Wizards will play 12 of 18 games at home—an incredibly favorable schedule to span the end of 2015 and the first month of 2016. In the increasingly competitive and jumbled Eastern Conference, it is a rare opportunity for the Wizards to enjoy some home cooking and take advantage of the rest and practice time that this stretch will afford.

Now, the Wizards hope to replicate the success of their Southeastern Division foes.

Since being taken with the first overall pick of the 2010 NBA Draft, John Wall has grown up before our 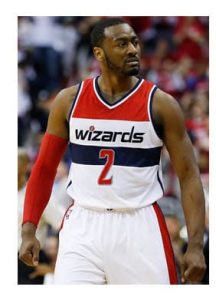 very eyes. Having gone from an immature point guard who couldn’t to shoot to arguably the top assist man in the entire league, the simple truth is that his Wizards will only go as far as he can take them.

So it should come as no surprise that, when asked, Wall attributes the Wizards’ slow start to himself.

“I played like some horse**** the first month and a half, so that’s the start of it right there,” he said when asked why the team has gotten off to a slow start.

“Yes, I’m surprised,” he said when asked if he expected the Wizards to have fared better than merely being a .500 team. “I think we should be a lot better.

“We lost a lot of games where we dealt with injuries, but there are no excuses. The good thing is at least we got on the way to get back to .500 with guys injured and when guys get back healthy, we probably can get on a roll.

“But I thought our record could be better than what it is.”

As the Wizards look forward to playing with a full deck once again, though, the team can find solace in the fact that Wall’s other teammates are doing a fair job of pulling their own weight. He is quick to point out the fact that Marcin Gortat has played better recently and gives him credit for the amazing 13.1 assists per game that Wall is averaging since Beal went down with the injury. He is also scoring 19.9 points per game over that stretch and is converting 38 percent of his three-point shots.

In the much-improved and more competitive Eastern Conference, a good (or bad) 10 game stretch may make all the difference in the world. And depending on how things shake out for these Wizards between now and April, we may be looking back at the stretch of games that Bradley Beal missed and realize that, together, a rookie named Kelly Oubre and an All-Star named John Wall saved the Wizards’ season.

With the improved play of the Charlotte Hornets and health of the Indiana Pacers and Miami HEAT, the Eastern Conference is no longer a walk in the park for a team like the Wizards. Last season, the team had its fair share of ups and downs but managed to right its ship and still finish up with 46 wins.

If the first few months of the 2015-16 season are any indication, things won’t be as easy this year.

There are disappointments, and then there are the 2015-16 Washington Wizards. On the bright side, though, there is still time to turn things around.

And even better—John Wall and an inspiring rookie may have already done so.