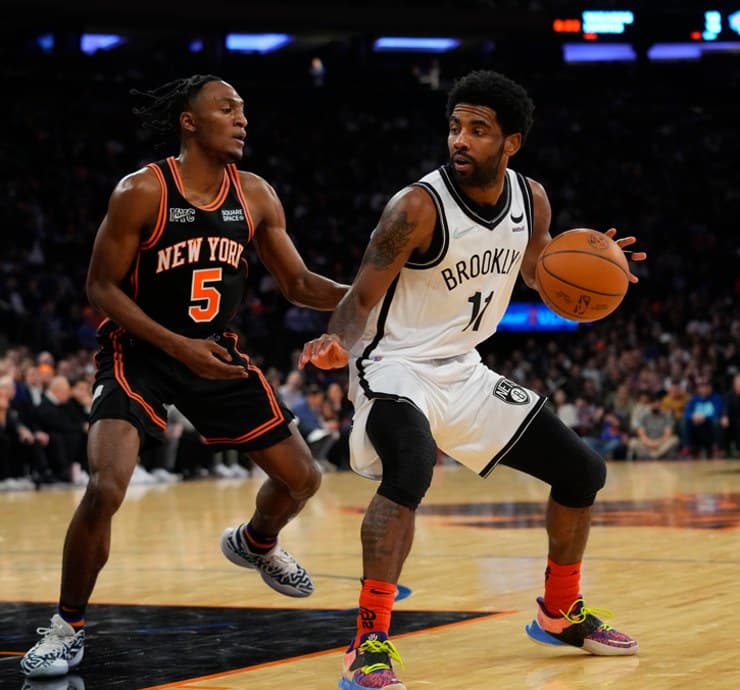 One of the latest NBA trade rumors concerns Kyrie Irving and the Nets reaching an impasse; the Lakers, Knicks and Clippers are interested in the 12-year veteran. Of course, on Jul. 6, 2019, Irving signed a four-year, $136.49 million contract with the Nets. Irving has a player option for the 2022-23 season worth $36,503,300. He has until next Wednesday, June 29 to make a decision.

Furthermore, per Shams Charania of The Athletic: “Multiple sources tell the Athletic that conversations about Irving’s future have gone stagnant between him and the Nets. An impasse currently exists among the parties that clears the way for the seven-time All-Star to consider the open marketplace.” Not to mention, Irving’s trade value has decreased.

Charania also went on to state, “The Lakers, Knicks and Clippers are expected to be among the interested suitors if Irving heads elsewhere.” If Irving opts in for the final year of his contract, what’s to say Nets general manager Sean Marks won’t attempt to trade him during the 2022-23 season?

Then again, as stated above, his market value has gone down. Irving played only 29 games last season. It’s better to trade him now rather than later. More NBA trade rumors are on the main page.

In the 2021-22 regular season, the guard averaged 27.4 points, 4.4 rebounds and 5.8 assists per game. Regarding the Lakers and Clippers, these teams are already lacking cap space. If either team attempted to acquire Irving via a sign-and-trade, it would wreck their roster. To avoid the hard cap, their best option is an opt-in-and-trade. Plus, there is a possibility that Anthony Davis could end up on the Knicks.

Before the Pelicans traded him to the Lakers in 2019, Davis was interested in playing in New York. Though, this was many years ago. By now, the eight-time All-Star is probably comfortable where he is. But Los Angeles might not be better off with him. The star has dealt with multiple injuries these last couple of seasons, such as plantar fasciitis, a sprained ankle, a shoulder injury and an injured groin.

Moreover, let’s not forget, Kyrie Irving wanted to get away from LeBron James. It would make little sense for him to become his teammate again. Then there’s Russell Westbrook to think about. For one analogy, talk about having too many chefs in the kitchen. If the Lakers struggled to win with the James-Davis-Westbrook trio, adding Irving would further complicate this problem — even if Davis gets traded.

The Knicks are Irving’s most realistic option

Additionally, while the Knicks are not far off from becoming legitimate title contenders, the Clippers are already there. This team with Kyrie Irving, Kawhi Leonard and Paul George could give the Warriors some serious competition in the Western Conference. Aside from having barely any cap space, the Clippers would have to trade a future first-round draft pick and a serviceable veteran to make this trade work.

Then again, maybe the west coast isn’t for Irving. If he wants to remain in the Eastern Conference, his best bet is either staying with the Nets or demanding a trade to the Knicks. Based on Brooklyn’s front office meeting, the latter sounds like the better option. The Knicks would have an easier time opening up cap space for Irving. Seeing the 2016 NBA champ play alongside Julius Randle and Derrick Rose would be quite a sight to behold. Other NBA trade rumors are on the main page.