“Not a Game: The Incredible Rise and Unthinkable Fall of Allen Iverson” – a new book by Washington Post writer Kent Babb – shows in great detail how an NBA player’s life can spiral out of control after their playing career comes to an end. 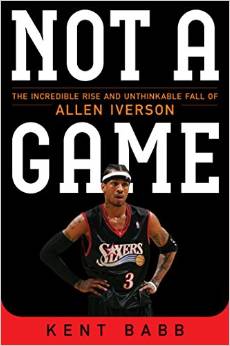 The book details Iverson’s ascent to stardom and extraordinary success in the NBA. It talks about how he changed the NBA, left an imprint on pop culture and inspired people across the world with his play. But the book also paints an ugly picture of Iverson’s post-basketball life and explains how he got to this low point. Babb’s fantastic, in-depth reporting shows just how far Iverson has fallen in recent years.

The subject could be anyone and this would be a tragic story about financial troubles, family issues and addiction battles, but the painting is even more frightening because it’s Iverson on the canvas.

This isn’t just some random player who had a short stint in the NBA and didn’t make much money while in the league. This is one of the greatest players of his generation, a former NBA Most Valuable Player and an international celebrity. Iverson spent 14 years in the NBA and made 11 All-Star appearances. Throughout his NBA career, he earned $154,494,445 from his playing contracts, and even more when you factor in all of the lucrative endorsements he had.

Yet, throughout the book, we see Iverson deal with financial issues, lose his home and, sadly, watch his life essentially collapse around him.

It’s important to note that one of the biggest reasons Iverson has these money troubles is because he used a lot of his income to take care of so many friends and family members. After making it and becoming a huge success, he wanted those close to him to come along for the ride and experience the same things he was experiencing. He bought houses and cars for others, paid for everything when they’d go out and was quick to offer money to those in need (paying for funerals, medical expenses, etc.). Babb’s book talks to many people whose lives were made better by Iverson, from his time at Georgetown to his final years in the NBA, and it’s clear that the point guard has a huge heart.

However, it unfortunately seems this kindness and desire to help others is what ultimately drained his bank account and left him struggling.

Babb reports that Iverson is paid $800,000 every year due to the “life-long deal” he signed with Reebok, but he’s still having a lot of financial issues because he has so much debt that the money disappears almost immediately. Fortunately for Iverson, he will receive a $32 million final payment from Reebok when he turns 55 years old, but that’s still 15 years away.

Babb’s book is a must-read for fans of the NBA and sports in general, as it is full of never-before-heard anecdotes and interesting facts that shed new light on things. For example, Babb reveals that Iverson was likely drunk during his famous “practice” rant, and he was also extremely emotional because his best friend had just been killed seven months before. You also find out that Iverson decided to sport cornrows just because his Reebok liaison, Que Gaskins, told him, “You better NOT get cornrows.”

There’s plenty of information like this scattered throughout the pages (and several were so interesting that I picked up my phone and called a friend to tell him immediately after reading).

This is a cautionary tale for athletes. If this can happen to someone like Iverson, this can surely happen to any other player who isn’t smart with their money, refuses to live a modest lifestyle and struggles to find happiness after the sport that defined them for much of their life moves on without them.

However, it also explains why Iverson is in this situation and it’s largely due to his big heart – the very same thing that made so many fans fall in love with him in the first place.