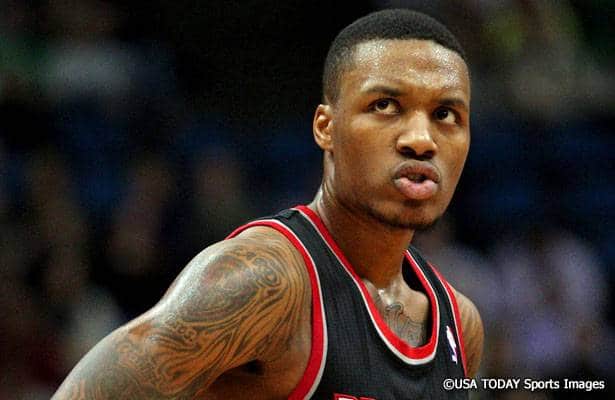 Not just “Lance Cam” but “DOUBLE Lance Cam” from Drake.

The backcourt of the future in Utah sits down for a segment for an upcoming episode of NBA Inside Stuff.

The Pacers were ‘pouring out liquor’ all over IG for ex-teammate Lance Stephenson today.

Just in case you didn’t know, DWade wants to make sure you know whose city Miami is! The return of “Wade” County.

Giannis Antetokounmpo had a special message for fans of the Bucks today.

Summer League Videos of the Night

Can we just sign Zach LaVine up for the Dunk Contest right now?

The “basketball gods” tend to even things out, as David Wear decides to put Mr. Lavine on his Summer League poster. True respect to LaVine for challenging the big man at the rim, though.

NBA at the ESPY’s

Dame Lillard with the very “Blazer-like” blazer on the red carpet.

Check out DeMarcus Cousins looking very svelte as he checks in for an interview prior to the awards.

You had to know newly re-signed Nick Young wouldn’t miss an opportunity to bring his swag and his girlfriend (Iggy Azalea) to take over the red carpet.

The Sixers’ Dream Team conducted their final auditions today, and it looks like there may be some stiff competition for a position on next year’s squad.

Much like Turtle (Entourage, S1), our votes are completely for sale.

Clip of the Night

Kobe’s ‘big’ in China…but clearly not the biggest star of this commercial.