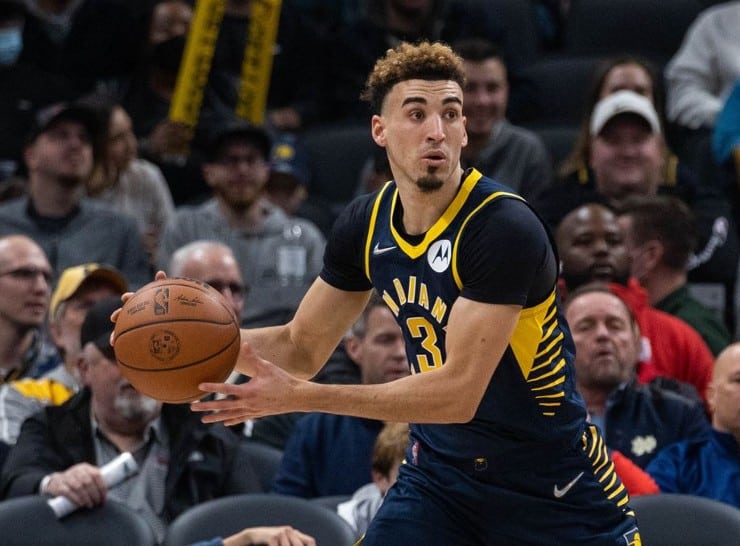 The Indiana Pacers are exercising Chris Duarte’s $4,124,400 team option for the 2023-24 season. This is part of the four-year, $17.7 million rookie scale contract he signed with the team last August. His deal is fully guaranteed.

The team had until Oct. 31st to make a final decision. If Duarte plays well in the 2022-23 season, Pacers G.M. Chad Buchanan will probably pick up his fourth-year option next year.

Per multiple NBA betting sites, the Pacers possess the sixth-lowest odds to win the championship in 2023. Though, a few sportsbooks are showing a higher probability for the team making the playoffs this season.

As expected, the Pacers are picking up the third-year option on guard Chris Duarte, who averaged 13 points as a rookie, sources tell ESPN. Duarte was the 13th pick in the 2021 Draft.

Of course, Duarte was then selected to the NBA All-Rookie Second Team.

However, Duarte was ruled out for the remainder of the season in April due to a toe injury.

Additionally, in 54 appearances with Oregon during his NCAA career, the guard averaged 14.9 points, 5.1 boards, and 2.1 assists per contest. Plus, he shot 47.3% from the field and 38% from beyond the arc.

He helped the Ducks reach the Elite Eight round of the NJCAA Division I Tournament.

At the end of the season, Duarte was named Pac-12 Player of the Year – AP. Not to mention, he was selected to the All-Pac-12 First Team and Pac-12 All-Defensive Team.

Moreover, the Pacers have not advanced past the first round of the playoffs since the 2013-14 season. But the team has failed to qualify for the postseason the last two seasons. Under head coach Rick Carlisle, Indiana regressed in the 2021-22 season, winning only 25 games.