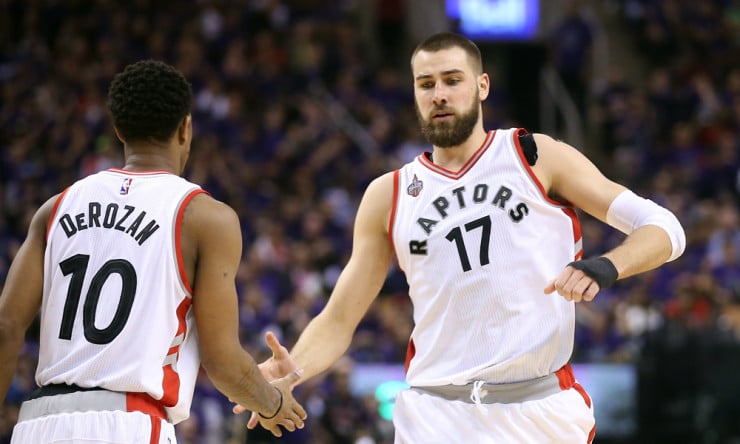 DeMar DeRozan got hot, the Pacers couldn’t keep up and that pretty much was all it took to wrap up a surprisingly competitive series.

While DeRozan still didn’t shoot particularly well (he was an atrocious 10-for-32 for the game), he managed to rifle off an impressive 30 points, including 15 by halftime and 28 by the end of the third quarter.

This time around, though, for the first time really in this series, Toronto got some significant contributions from multiple members of the rotation outside of DeRozan, Kyle Lowry or Jonas Valanciunas. Patrick Patterson knocked down a handful of big threes and both Cory Joseph (eight points, four assists) and Normal Powell (13 points) had their moments, as well, especially in the first half. Lowry stunk again, having shot 5-for-14 for the game and scoring only 11 points, but DeRozan came through when it mattered and that meant everything for the Raptors in an important Game 7, not only for the year but for the future of the Toronto organization.

The Pacers weren’t all bad. Monta Ellis had one of his better games of the series, scoring 15 points, while George Hill chipped in 19 and Paul George was as consistently awesome as he’s been all playoffs with 26 points and 12 rebounds of his own.

George really was the MVP of the series (and probably the entire first-round), finishing with averages of 27.3 PPG, 7.6 RPG, 4.3 APG and two SPG for the series, but the rest of that lineup wasn’t good enough often enough to get Indiana a first-round upset against one of the East’s best teams this past season.

Just getting to seven games was a bit of a moral victory for Indiana, though, and they’re well-positioned to make a push at the postseason again next year, especially with another year of development out of Myles Turner, who also had a surprisingly strong first postseason.

As for the Raptors, they move onto Eastern Conference Semifinals, where they’ll host the Miami HEAT. There is every expectation that it will be just as hotly-contested of a series as this one was.