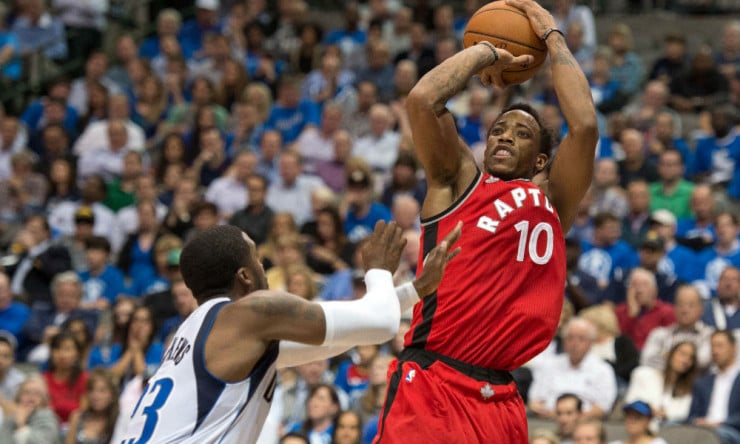 Indiana Pacers forward Solomon Hill shot 4-for-4 from three-point range in a thrilling Game 5 matchup against the Toronto Raptors, but only three of them counted. The fourth, which would have tied the game and sent it into overtime, left Hill’s fingertips about two-tenths of a second after the buzzer in the fourth quarter, turning what would have been one of the playoffs’ most exciting moments so far into a considerably less enthralling road loss for the Pacers that now puts them a single game away from elimination.

We shouldn’t feel too bad for the Pacers, though, as they came into the fourth quarter up by 13 points, only to squander that lead in the sort of breakdown fans have seen from this group too many times this season. Indiana scored only nine points in the entire fourth quarter, and seven of those came in the final two minutes of the game.

It seemed as though the minute Indy sat Paul George for a rest, things blew up and the Raptors surged back to go on a 23-2 run. George, for his part, dropped in another monster night, scoring 39 points to go along with eight rebounds and eight assists. He even had a little bit of help on offense this time, getting 14 points out of Myles Turner and 15 from George Hill, but that fourth-quarter collapse was everything in this game. Through three quarters, the Pacers were running the show.

The final 12 minutes belonged to Toronto.

Kyle Lowry had another brutal game, shooting 3-for-11 from the field and keeping his series field goal percentage among the lowest of any starter in these playoffs, but DeMar DeRozan finally had the big game we’ve been waiting to see from him, scoring 34 points on 10-for-22 shooting and 12-for-13 from the free-throw line. Norman Powell and Cory Joseph put up gutsy efforts off the bench, too, and the Raptors stole a pivotal Game 5 at home.

Game 6 will be in Indiana, but this one was a stomach punch. George can’t do much more than he’s doing, and it’s not enough. It seems like only a matter of time before Toronto advances to the Conference semifinals.