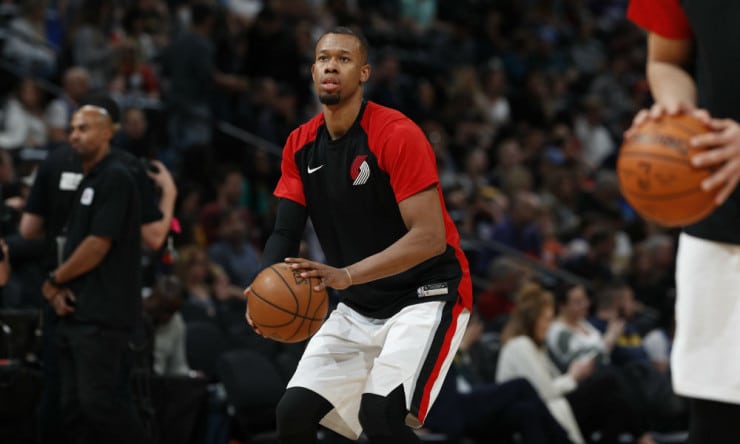 It’s still unclear whether Rodney Hood or Kent Bazemore will start on the perimeter next to Damian Lillard and C.J. McCollum. Based on last season alone, when Hood was acquired from the lowly Cleveland Cavaliers in exchange for two late second-round picks and Bazemore lost his starting spot with the rebuilding Atlanta Hawks, it would seem as if neither is qualified to play that role – and not just for a team that’s chasing a championship, either.

But Hood and Bazemore would hardly be the first players to revive their careers with the Portland Trail Blazers, and on the eve of training camp, both acknowledged their mindsets factored into those struggles.

“It’s pretty much night and day,” Hood told Basketball Insiders at media day of his confidence level compared to when he joined the Blazers last February.

Bazemore was even more forthright about his final season with the Hawks.

The Blazers have long relied on continuity as much as culture, a crutch they won’t be able to lean on to nearly as hard this season. They’ll open 2019-20 with three new starters, and don’t return a single rotation player off the bench who began last season in Portland. There’s no telling when Jusuf Nurkic will return from the devastating broken leg he suffered last spring, nor how effective he’ll be when he’s ready to take the floor again.

But with the unknown comes possibility, and the Blazers believe they’re better situated to compete for a title now than ever before.

“This year our focus is to win the championship,” Lillard said.

Hood and Bazemore are hardly panaceas. If they revert back to or even exceed previous levels of solid play, Portland will still be at a deficit on the wing compared to some other contenders. But the Blazers don’t need Hood and Bazemore to operate with the ball like stars, and general manager Neil Olshey brushed away questions about their ability to guard the likes of LeBron James and Kawhi Leonard.

While it’s obviously in Portland’s best interest to downplay its lack of an athletic, long-limbed forward who can make life a bit more difficult on the best players in the world, Al-Farouq Aminu and Moe Harkless were routinely proven net liabilities when it mattered most. It’s no coincidence their offseason departures followed major decreases in playing time against the Denver Nuggets and Golden State Warriors in last year’s playoffs. No team in basketball has more impactful length at the rim than this one, either, further mitigating fallout from a lack of a prototype wing defender.

The Blazers finally grew tired of watching their offense stagnate as teams ignored Aminu and Harkless away from the ball, responding by replacing them with wings who can make defenses pay for being left alone. Hood, at 6-foot-8 with a smooth handle, can create a makable shot whenever he wants, and connected on 41.4 percent of his catch-and-shoot triples in the postseason, per NBA.com. Bazemore, meanwhile, was singled out by multiple teammates as the player who’s opened eyes most during preseason scrimmages.

“You can just see that he has a fresh start, and he’s excited to be here,” Lillard said. “His playmaking, his defense…He’s been matching up with me every opportunity he can get. His ability to shoot the ball. His understanding – he’s just like a vet out there.”

Portland quietly finished third in offensive rating last season behind the Warriors and Houston Rockets, historic juggernauts. While it’s remiss to expect them to improve on that standing, the presence of capable ancillary creators on the wing opens up possibilities of pace and stylistic flexibility that should make points come even easier for not just the Blazers at large, but also Lillard and McCollum – especially under the playoff microscope.

“In the past, we didn’t have these type of wings that were like scorer/playmakers in the way these guys are,” Lillard said of Hood, Bazemore, and Mario Hezonja. “Like I’ve played off the ball a lot more than usual these past few weeks because those guys get the ball and are just taking off, and I’m catching and shooting the ball instead of making something happen and playing against a crowd.

“I would love it if we could continue that into real games.”

Most of the intrigue surrounding Portland this season relates to unproven young players and more recognizable reclamation projects. Neil Olshey on Monday called Anfernee Simons “the best young guard in the league.” A confident Zach Collins insisted he’s just as comfortable playing power forward as center. Hassan Whiteside acknowledged an ongoing basketball rebirth with the Blazers after losing his way with the Miami HEAT.

Hope springs eternal on media day, but there’s a real sense in Portland internally and externally that this team is different from overachieving ones of the past.

“I think it’s the deepest, most talented, most experienced team we’ve had,” Olshey said.

The rational behind such optimism is in the eye of the beholder. Fans believe the Blazers have finally broken through following last season’s surprise trip to the Western Conference Finals. Pundits who deem Portland as a serious contender highlight the emergence of Simons, the rise of Collins and the presence of Whiteside in wake of Nurkic’s absence.

But for the Blazers to reach their utmost potential, a baseline threshold of two-way performance must first be established, and no players on the roster will inform it more than Hood and Bazemore. That’s not an ideal situation for a team with championship aspirations. Considering its standard level of play was more limited in seasons past, though, Portland is certainly better off now, almost no matter how they assert themselves in wake of respective basketball doldrums.

To a man, though, everyone in the Blazers’ locker room and front office seems positive Hood and Bazemore are ready to emerge from those depths for the better.

“I watched the team play all last playoffs,” Bazemore said, “and I just envisioned myself in a Trail Blazers jersey, being that missing piece.”

Jack Winter is a Portland-based NBA writer & reported with Basketball Insiders. He has prior experience with DIME Magazine, ESPN, Bleacher Report, and Sports Illustrated.