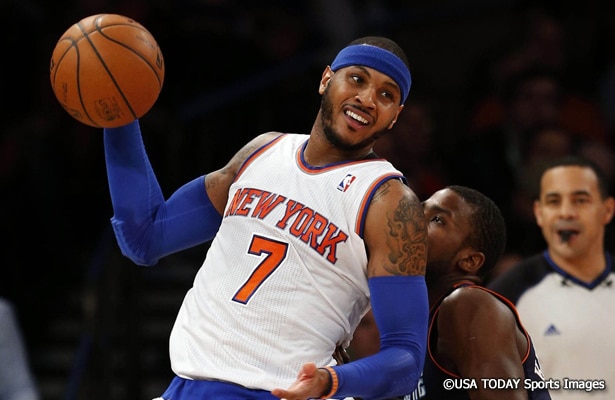 Let’s start by fast-forwarding 12 months into the future… One year from now, what’s the best-case scenario for the New York Knicks? Could they be 10 games better than they are this season? Could they be a few games above .500? Even under ideal circumstances, could they possibly be considered a championship contender?

Keep in mind: Not even including Carmelo Anthony, New York’s 2014-15 team salary will still exceed $70 million – including $49 million committed to the trio of Amar’e Stoudemire, Tyson Chandler and Andrea Bargnani for the 2014-15 season. Thus, Knicks GM Steve Mills will have very limited roster flexibility this summer. Because New York will be over the cap, they will not be able to reel in any significant free agents. They also don’t have either their first or second-round pick to improve the roster.

This is something Anthony will have to consider this summer when he has to make a life-altering decision in July. Will Anthony be willing to essentially sacrifice another year of his prime? Has the Knicks organization exhibited an ability to build a winner?

Looking at the big picture, are the Knicks completely convinced Anthony will be willing to commit to the Knicks long-term?

Of course, he’d have to be willing to leave $30 million on the table to play elsewhere, and the Knicks will have cap space to spend money in the summer of 2015.

Still, are the Knicks 100 percent sure that they can keep Carmelo? If they are not, they are taking a huge risk by not trading him prior to the February 20 trade deadline. Once that date passes, Anthony holds all the power. He will be the one making the important decisions.

Interestingly, as I have argued over the last couple of months, ‘Melo leaving the Knicks high-and-dry would not actually be the worst-case scenario. Considering all the long-term ramifications, committing $129.1 million to a 30-year-old Anthony might actually be the more detrimental outcome. The Knicks are 11 games under .500 with a healthy, in-his-prime Anthony playing at an incredibly high level. What happens as he ages and his skills deteriorate, while at the same time his salary escalates? Remember, if the Knicks max him out, ‘Melo will pocket a cool $29.1 million in 2018-19, when he’ll turn 34 years old.

Thus, there are multiple reasons to believe the Knicks should, at the very least, explore all options when it comes to trading away their best player.

Despite being fully aware that, in all likelihood, owner James Dolan won’t even consider trading away Anthony, last week I looked at a potential deal between the Knicks and Bulls that could possibly benefit both organizations.

Today, let’s get creative and examine a few other potential landing spots for Anthony that make sense for both the Knicks and their trading partner.

Why it makes sense for the Knicks: Dragic, who is playing incredibly well this season, would finally solve the Knicks gaping hole at point guard. Okafor’s value lies in the fact that his insured deal expires at the end of this season. The draft picks would obviously help re-stock the cupboard with top-tier rookies. Including Felton in the deal would wipe his salary off the books and increase the Knicks spending budget in the summer of 2015.

Why it makes sense for the Suns: Amazingly, Phoenix will have a total of six first-round picks in 2014 and 2015, including up to four selections in the first round of the loaded 2014 draft. Thus, they could be looking to package a couple of those picks for a player that will provide immediate benefit.

Furthermore, sitting 10 games above .500 with a 30-20 record, the Suns have been one of the NBA’s pleasant surprises this season. And it appears they unearthed a gem in Eric Bledsoe. As a result, there have been rumors they are willing to move Dragic in the right deal, as they are going to have to shell out major money in order to re-sign Bledsoe this summer.

If they traded for Anthony, they would secure his Bird Rights and could then pay him far more than any other team. In addition, they could surround him with a rising star in Bledsoe and a bevy of young, promising bigs: Markieff and Marcus Morris, Miles Plumlee and Alex Len. They will also have all those picks in a deep draft that could certainly supplement the depth on any roster. If the Suns are serious about making a major push towards legitimacy, they could do just that in one fell swoop.

Why it makes sense for the Knicks: If the Knicks do actually seriously consider trading Anthony, one option to explore would be fully committing to a full, complete rebuild/overhaul. This is the type of trade that would allow the Knicks to hit the reset button, tear the whole thing down to the studs and start fresh on July 1, 2015. If New York was able to move ‘Melo, Smith and Felton, the Knicks would be looking at over $50 million in cap space in 2015. If the Knicks have the most cap space in the league heading into the summer of 2015 (All four Grizzlies coming over have two or less years left on their contracts), it could make for a very interesting offseason in NYC – especially considering the free agent class that year could include names such as Kevin Love, LaMarcus Aldridge, Rajon Rondo, Paul Millsap, Marc Gasol, Al Jefferson, Tony Parker, Roy Hibbert, DeAndre Jordan, etc.

If ‘Melo re-signs with the Knicks for the max this summer, he’ll be on the books for $24.1 million in 2015-16. Could that money and cap space be better spent on a pair of younger studs? Granted, relying on free agency is always a gamble, but so is guaranteeing a 30-year-old scorer $129 million through 2019.

It could certainly be argued that in the unlikely event that the Knicks do decide to move ‘Melo, this is the way to go. Blow the whole thing up and start from scratch. This type of deal gives Steve Mills and Jim Dolan maximum flexibility in 2015 (as opposed to be saddled with a maximum contract). Once ‘Melo is moved in this scenario, you try to trade Chandler and get back additional assets. In this particular situation, they would also look to quickly flip Randolph as well.

Why it works for Memphis: The Grizzlies were legit contenders for the crown last season, advancing all the way to the Western Conference Finals. They have struggled over the first half of this season, due largely to injuries, but are still in middle of the pack out West.

Adding a superstar such as Carmelo Anthony would obviously revive hopes and increase expectations in Memphis. Anthony, flanked by a healthy Marc Gasol, Mike Conley and Tony Allen would be a formidable and dangerous squad.

Why it makes sense for the Knicks: Larkin, the 18th overall pick in the 2013 draft, is a young point guard with some promise, and is locked into a very cap-friendly rookie contract. Wright is a former lottery pick that has exhibited flashes of potential. Dalembert and Ellington’s deals expire in 2015. Ledo is raw but talented.

Why it makes sense for Dallas: We know Mark Cuban has money and that he isn’t afraid to spend it. Would be willing to give ‘Melo the max contract he’ll be looking for?

Having three potent scorers in Dirk Nowitzki, Monta Ellis and Anthony on the floor together (with Jose Calderon facilitating the offense) would be fascinating to watch. Defense would obviously be an issue, but this team would be an awfully scary postseason opponent.

Why it makes sense for the Knicks: Otto Porter, the No. 3 overall pick last June, has not lived up to expectations during his rookie season, but showed during his collegiate career at Georgetown that he possesses a unique and enticing skill set. Vesely and Singleton have also disappointed during their career in the nation’s capital, but could their career’s be revived in NYC? Ariza has played well this season and has just one year left on his deal. The Wizards owe their 2014 first-rounder to the Suns (top-12 protected), so the earliest first rounder they could trade would be their 2016 pick.

Gortat is set to become a free agent after this season. If the Knicks didn’t view his as their “center of the future,” they could try to flip him in a convoluted three-way deal, in an attempt to acquire younger players or picks. However, from a New York perspective, this deal would primarily come down to how they felt about Porter.

Why it makes sense for the Wizards: Washington has finally climbed out of the Eastern Conference basement after spending seemingly an eternity below .500. They have their franchise point guard (John Wall) and shooting guard (Bradley Beal) in place. Bringing in a veteran superstar like Carmelo Anthony, could be the piece that transforms them into a real threat overnight.

Why it makes sense for the Knicks: Sullinger has been a beast in Boston of late, averaging 19.8 points and 12.8 rebounds per contest over the last three weeks. Olynyk has been inconsistent during his rookie campaign, but possesses the size and athleticism that scouts and coaches love. Both players are locked into extremely affordable rookie-scale contracts. Humphries has one year left on his deal, and Bass has two, so both will be off the books by 2015.

Why it makes sense for the Celtics: GM Danny Ainge has, on multiple occasions, adamantly attempted to squelch rumors that the Celtics intend to trade Rajon Rondo. A move like this would certainly send the message loud and clear that C’s have no interest in tanking or a long-term rebuilding project. We’d have to assume this would make Rondo happy, increasing the chances he agrees to a long-term deal with the Celtics.

Boston could have as many as five first-round picks over the next two seasons, so trading one away would not be crippling. It would be a major roll of the dice by Ainge and the Celtics; one that would cause a seismic shift in the Atlantic Division.