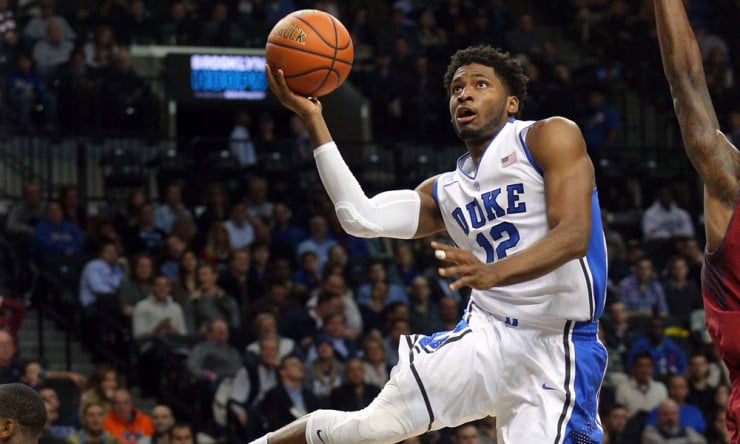 The Blue Devils’ starting perimeter players outscored Gonzaga’s 41-19 in what turned into a blowout victory for Duke in the end, 66-52. The differential in turnovers was big, as Gonzaga gave it up 13 times, compared to just three miscues from Duke. Justise Winslow was impressive in front of his home crowd once again, scoring 16 points and grabbing five rebounds. He’s been one of the tougher matchups in the tournament since being moved to the power forward position by Coach K. Next up for the Blue Devils in the Final Four is the Michigan State Spartans, who they defeated back in November in the State Farm Champion Classic. There’s very little worth taking away from that game when previewing their Final Four Clash as that was so long ago and both teams have changed so much since that time. The Spartans got great play from their backcourt in their Elite Eight overtime win against Louisville. It’s highly doubtful that Quinn Cook, Tyus Jones and Matt Jones will be able to outperform them like they did Gonzaga’s guards, but if they can make them work defensively, break down the Spartans defense and free things up for Jahlil Okafor and Winslow, they should be able to set up a show down against the winner of Kentucky/Wisconsin for the title.

The Spartans survived a late scare against Louisville after Mangok Mathiang split a pair of free throws to tie the game in the final seconds. During the overtime period, Michigan State turned up the defense, and Branden Dawson’s put-back extended their lead and sealed a trip to Indianapolis. By knocking off the second, third and fourth seeds in the East region (top-seeded Villanova was upset), Coach Izzo and his Spartans are back in the Final Four for the first time since 2010 (ironically also held in Indy). MSU outlasted 11 lead changes against the Cardinals, thanks to 17 points from Travis Trice and 14 bench points from Bryn Forbes. Izzo has built this program on the foundation of defense and it’s been evident after two weekends that the Spartans are the best pound-for-pound defensive team remaining. No opponent tournament has shot better than 37 percent against the MSU defense – they’ve held their last six tournament opponents below 40 percent, dating back to last season. Now, their defense will see their toughest test to date. None of their tournament opponents thus far have quite the offensive firepower that their national semi-final foe possesses. We eluded to a statistic prior to the tournament that could be a determining factor: MSU is undefeated on the year when four players reach double figures. Dawson, Trice and Denzel Valentine are the expected scorers, so it will be up to a complementary scorer like Forbes to push the Spartans into their first championship game in six years. Izzo has a record 13 wins in the NCAA tournament as the lower-seeded team. At this point, we can’t count him out for number 14.