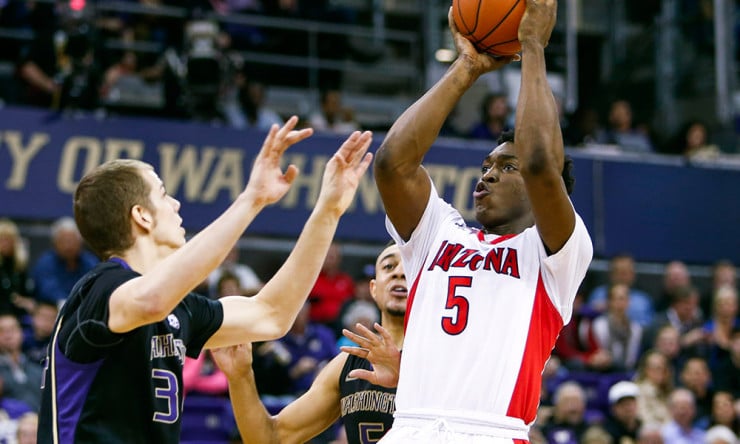 It may not have been their best defensive performance of the season, but the Wildcats had no issues with dispatching the Texas Southern Tigers, eliminating them 93-72 on a night in which they got 84 points from their starters. Rondae Hollis-Jefferson’s 23 points and 10 rebounds led the way, while Stanley Johnson joined him in the 20-point club with 22 points, five rebounds, two assists and two steals in his NCAA Tournament debut. Johnson was so impressive that he actually drew a LeBron James comparison from all-time great Reggie Miller. The Wildcats outrebounded the Tigers 35-19 and perhaps even more impressively made 24-27 from the free throw line. The lack of bench production may be a tad bit concerning, but as long as their starters play like they did, the Wildcats are going to be a legitimate title contender. Their defense is going to have to get better, though, especially as they get set to face off against one of the best offensive players in the country in Ohio State’s D’Angelo Russell. Russell had 28 points, six rebounds, two steals and two blocks in the Buckeyes’ second-round overtime win against VCU. He’s the kind of elite talent who can lead the 10th seeded Buckeyes’ to a few upsets, so the Wildcats have to be really focused on slowing him down, limiting his quality opportunities and force his teammates to try to beat them instead.

Big players step up in big moments and D’Angelo Russell has done that all season. The freshman, who many people think may be the second pick in the NBA draft, got the job done against a scrappy VCU team to the tune of 28 points and seven rebounds. Amir Williams and Jae’Sean Tate joined him in double figures and the Buckeyes came up with 16 assists. It’s not all roses because VCU managed to make 10 three pointers and grab 12 offensive rebounds, but Thad Matta should sleep well tonight with another NCAA tournament victory under his belt. Looking forward, it doesn’t get any easier for OSU with second seeded Arizona on the horizon. In order to have a chance to get a victory, the Buckeyes must defend the playmaking of point guard T.J. McConnell, the streaky shooting of freshman Stanley Johnson the inside game of Kaleb Tarczewski and the jack of all trades Rondae Hollis-Jefferson. Simply put, it will take a near perfect game Russell and this supporting cast; certainly not impossible, but far from a guarantee.