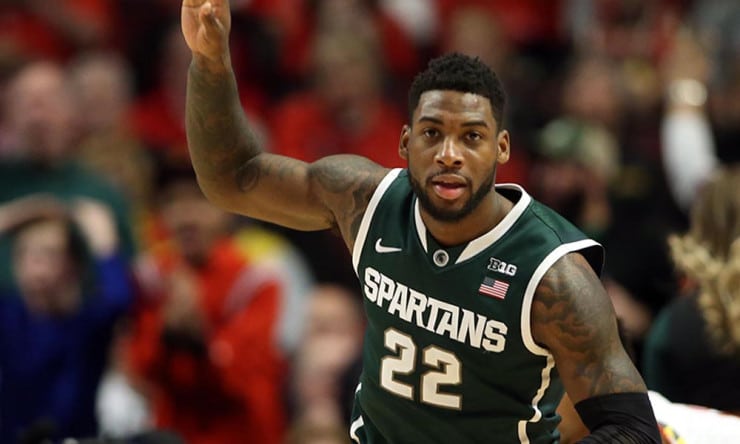 Can anyone ever overlook the Tom Izzo-led Michigan State Spartans? They may not have been a top-ranked team all season, but the numbers confirm solid defense is being played in East Lansing. In addition, the Spartans are turning the ball over less and less lately. They are almost on par with last year’s team in terms of turnovers per game, and that 2013-14 team took care of the ball at the best rate in Izzo’s tenure. Leading the charge in 2014-15 is Travis Trice (14+ PPG), followed by Braden Dawson and Denzel Valentine (14+ PPG) – two seniors and a junior, respectively, with NCAA tournament experience.  Dawson is going to finish his career at MSU as a top-10 rebounder, which says a lot for a guy battling back from a knee injury. Dawson and current Golden State Warrior forward Draymond Green are the only players in school history to rank in top 10 in Spartan career rebounds, blocks and steals. While Coach Izzo spent time sticking up for Tom Crean following a recent game in Bloomington, lost in translation was that MSU picked up a quality road win while missing the services of Dawson. If one more player outside that trio can step up – perfect on the year when four or more players produce double figures – the Spartans are going to be a tough out. But what else is new?

Firmly on the bubble going into the final month of the regular season, the Bulldogs played well enough down the stretch to end a three-year tournament drought. They played the 38th most difficult schedule in the country, with their best wins coming against Ole Miss (twice), at Texas A&M and against Florida. They also played Gonzaga, Arkansas and LSU very tough. The Bulldogs feature three seniors in Marcus Thornton, Kenny Gaines and Nemanja Djurisic who are looking to close out their careers on a high note, but overall they’re a team built on balance and depth. They average 68 points, while allowing 64. They actually do a good job of making their opponents work hard for their points, evident by the 38 percent field goal shooting and 30 percent three-point shooting percentages they held their opponents to this year. However, they don’t create a lot of turnovers or block many shots, and they give the ball away nearly 13 times per game. The Bulldogs are coming into the tournament a little banged up, which makes surviving the opening weekend a daunting task. In order to do so they’re going to need at least two players, if not more, to step up above their normal level of production and not turn the ball over in excess.