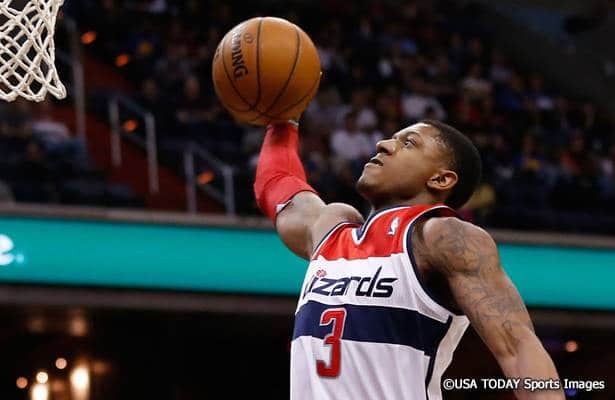 A 23-year-old leader who had never been to the playoffs, a second-year standout who wasn’t old enough to drive the last time the team made it out of the first round, a 12th-year big man who suffered a sprained MCL this season and a point guard two years shy of 40.

Their stars were too young and inexperienced, their veterans were too old. At least that’s how they looked on paper.

The Washington Wizards erased all judgments of age and experience with their attention-grabbing 4-1 first round upset over the Chicago Bulls. Aside from the Miami HEAT’s sweep of the Charlotte Bobcats, they were only the team in the NBA to wrap up their series in five games.

As the rest of the league plays on, battling through neck-and-neck matchups, the fifth-seeded Wizards will prepare for their next opponent they are looking to upstage.

“I am proud of those guys,” said Wizards head coach Randy Wittman. “For a lot of them it is the first time dealing with all this. Not only being in the playoffs, but closing off the series. They realize how hard it is. They never lost their focus of being satisfied with a couple wins.”

This season the Wizards are anchored by a backcourt of young guards who are hungry to take the playoffs by storm. Former 2010 top pick and All-Star John Wall is the face of the team; right alongside him is 20-year-old Bradley Beal. Neither had played in the postseason as of two weeks ago. Neither let it show.

Make sure to also read: What’s wrong with Kevin Durant?

“They are growing up, there is no question about that,” said Wittman. “I was not really concerned that this would be too big of a stage for them, you never know though. With the way they handled it, both of them being 18 or 19 years old when they came into the league, I knew they were a little different than other 18 or 19 year olds. They grew through something like this and now they can grow some more as we move forward.”

Bring on the spotlight. Beal and Wall are not shying away from the pressures of the playoffs. For Wall, this was a natural progression in his career. His teams had struggled in the past but he was viewed as one who could change the direction.

“It was a great feeling,” said Wall. “It was an opportunity I was looking forward to. Coming to the Wizards and being drafted number one and going through the tough times with my teammates, I was given enough rope to be the leader of this team and given trust to run the offense.  I don’t know why it took so long.  The main thing is to focus in and knowing what this team is capable of.  I just give a lot of credit to my teammates and the coaching staff with the great game plan and making adjustments and committing ourselves to team play on every given night.”

Beal didn’t have to wait as long as Wall. The third overall pick in the 2012 draft experienced a 15-win turnaround in his second season, a change which he impacted. Beal called proving naysayers wrong “a humbling experience” and now understands what his team is capable of dong in the playoffs.

“We’ve had continued growth,” said Beal. “We played great basketball in this series and we can only continue to get better no matter who we play in the next round.  We are going to approach each game the same way with our defensive presence and the offense will take care of itself.  For now we can be proud of what we accomplished and at the same time staying humble and moving forward.”

On the flip side 38-year-old Andre Miller adds invaluable veteran experience to the Wizards. In addition to the coaching staff, the younger players have a built-in mentor and adviser to guide them on the court. 15 seasons into his career, Bulls head coach deemed him “ageless” and credited him for how well the team is run.

That proven know how is paying dividends in the frontcourt as well. The Wizards were powered many times in this series by their veteran big man, veteran Nene. He averaged a postseason career high 17.8 points in the first round to go with 6.5 rebounds. Nene, 31, set the tone of the series by scoring 24 points in Game 1, the most of any player.

“He can score, he can shoot, he can post, he can dribble, he can pass, and he can defend,” said Wittman. “When he is not (in) there, we cannot put in one guy who has all those things.”

And so it is a total team effort for the Wizards. Center Marcin Gortat, 30, continued to be a quiet threat with a team-best 9.6 rebounds and 10.8 points, including two double-doubles. Swingman Trevor Ariza, a 10-year vet, averaged a career-best 15.6 points and 8.6. He scored 30 points in Game 4 while shooting 6-for-10 from long range. The Wizards are also getting almost 10 points a game from nine-year veteran Martell Webster.

Solid performances like that trickle down the roster. Among an experienced-heavy front court, fourth-year role player Trevor Booker has delivered 5.6 points and 6.6 rebounds.

Given the Wizards previous five sub-.500 seasons, the fact they made the playoffs in the first place was noteworthy. They had not reached the postseason since 2008 with a team that featured Antawn Jamison, DeShawn Stevenson, Brendan Haywood, Antonio Daniels, and an oft-injured Gilbert Arenas. It has been nine years since the Wizards made it out of the opening round, only to be swept by the Miami Heat in 2005.

This season’s team has no intentions of history repeating itself.

“A couple of years ago, with the guys that were here, we could never could have won a game like this,” Wittman said following the decisive Game 5. “Now this team believes in defense, what we do, and how we do it.”

The Wizards will now await the winner of the Indiana Pacers — Atlanta Hawks matchup. They will either face a top-seeded team that fought back from a series deficit or another spoiler team who knocked off the favorite. Whatever the final result of their playoff run may turn out to be, the Wizards believe each game will give them experience to continue being a contender from here on out.

“We will get a big jump from this,” said Wittman. “They know the intensity of how you have to play in the playoffs. Until you experience that, I think it helps you in the regular season and that is how you jump from 44 wins to 50 wins and getting homecourt advantage. Wherever this ends, you hopefully have that growth and experience through the playoffs.”