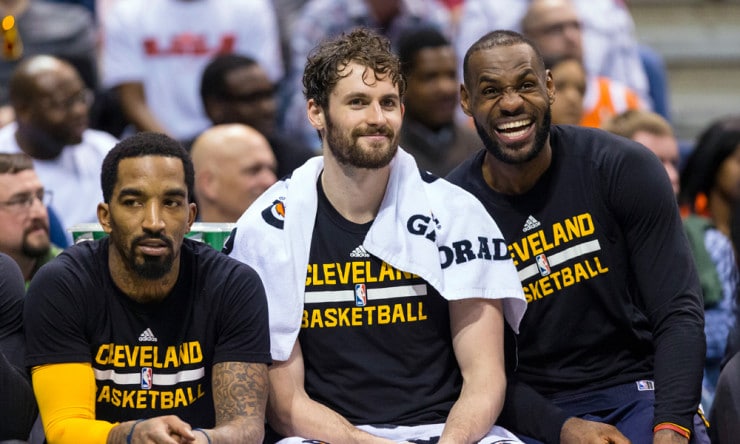 At some point there isn’t much more you can say, and it seems we’ve arrived there in the Eastern Conference Finals. James got out to a blistering start in Game 2 and finished with his 15th career triple-double on the way to another cruise control victory Thursday night, and any remaining inkling that Toronto can adjust its way back into the series was likely snuffed out.

The Raptors lack both the individual defenders and the team help scheme to keep up with Cleveland’s stars. Kyrie Irving has grilled them as effortlessly as LeBron has, mostly on a steady diet of isolation and two-man action where Toronto can’t handle his skill level. Kevin Love was steady again offensively, and is putting forth one of the longer stretches of consistent and effective defense we’ve seen in his career.

An early flurry from DeMar DeRozan kept the Raptors in it for part of Game 2, and even had them ahead briefly in the first half. The Cavs tightened up on him and will mostly live with his midrange game so long as he stays away from the rim and the foul line, though, and fellow backcourt star Kyle Lowry was once again a no-show. Barring an injury that Lowry himself has gone to great lengths to deny, his track record in playoff basketball is beginning to reek of a guy who either runs out of gas on a yearly basis or can’t carry the best parts of his game over into a tougher postseason atmosphere.

James did his damage from the post early in this one, including a stretch where the Cavs posted him up on DeMarre Carroll on four or five consecutive trips down the floor. Carroll has put in a workmanlike effort while mostly being left on an island to fend for himself against James, but simply isn’t strong or fast enough to keep up and is yielding breakdowns everywhere. The Raptors don’t have the recovery speed or coordination to cover behind him, and like many elements of Cleveland’s domination, there simply isn’t a good answer here; quicker doubles will just bring on LeBron’s carve-up of the defense more quickly. Carroll tried pressing up on James as far as halfcourt to disrupt his rhythm and keep him from his spots, but no one has the energy to do this for 35 minutes a night.

Dwane Casey started Luis Scola in place of Patrick Patterson in Game 2, but he should consider going in the entire opposite direction in Game 3 – starting Patterson and giving him a try on James defensively. He can’t do much worse than Carroll, and has shown flashes of just enough bulk to keep LeBron from walking to the rim so easily. What do they really have to lose at this point? Casey could think about trying Normal Powell as a jitterbug defensively on Irving, but he’s seemed extremely reticent to get the rookie involved in any important minutes. There really isn’t much else in the bag.

The only real potential trump card is the possible return of Jonas Valanciunas in Toronto, but it feels more like a pithy wild deuce in this case. Valanciunas is unlikely to be at 100 percent immediately even if he does get back by Saturday. He’ll be a pain down low if he has his legs under him, but this Cavaliers attack will roast him alive, especially if his mobility is limited.

Game 3 is the traditional trap game for Cleveland, and a Valanciunas sighting plus that fantastic crowd up north could introduce enough new variables to predict a closer game at the very least. The Cavs have resisted the road letdown in the last two rounds against comparable talents, though, and their defensive discipline this postseason has traveled with them (it’s also been slightly underrated). If we have any hope at seeing a competitive game this series, it’s the next game.