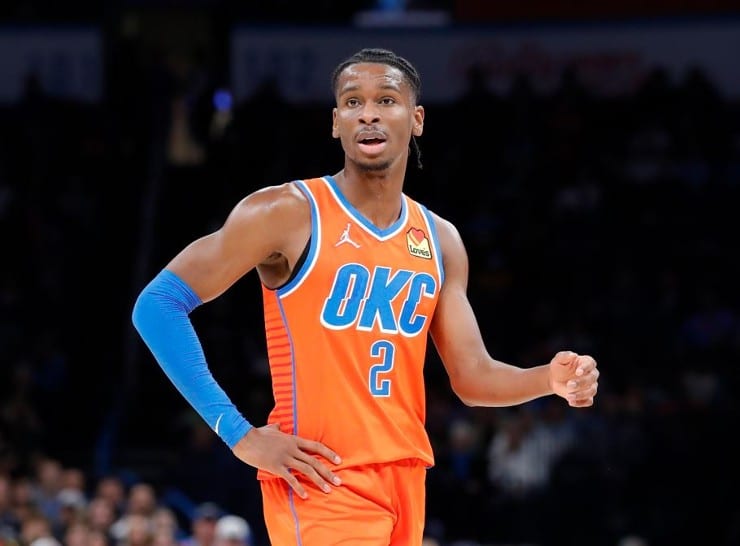 Oklahoma City Thunder guard Shai Gilgeous-Alexander grew up watching Hall of Famer Allen Iverson play in the NBA. Not only does A.I. hold a special influence on Gilgeous-Alexander on the court, but the effect is also visible fashion-wise.

During an interview with Bryan Kalbrosky of For The Win, the 24-year-old talked about the Philadelphia 76ers legend. “Yeah! On the court, he was obviously super electric,” Gilgeous-Alexander said of Iverson.

Multiple NBA betting sites are giving the Thunder the lowest odds in the league to win a championship in 2023. Nevertheless, some gamblers are putting bets down on them to make the playoffs this season.

“He had the crowd buzzing every time he stepped on the floor, and he was an extreme talent,” continued Shai Gilgeous-Alexander.

“He amazed the world. Off the court, when he challenged the dress code and went against the norm, that goes back to what I said before about not being scared to challenge the boundaries.”

“That was one of the main reasons why A.I. is who he is. He was never scared to be himself, no matter the situation. That set him apart from the group.”

Next, the Thunder guard was asked about having a potential career in fashion. “I’m not too sure where that road ends up or leads me to after I’m done playing,” explained the Kentucky product.

“I haven’t been too focused on it. I’m just focused on getting better and playing. When that time comes, I’ll take advantage of it at the moment and enjoy it at that moment. I haven’t put too much thought into it, but I do believe it will be for sure something in fashion.”

In July 2020, ahead of his rookie season, Shai Gilgeous-Alexander signed a multi-year sneaker and apparel endorsement deal with Converse. Of course, GQ named the Thunder guard the “Most Stylish Player” in the NBA this year as well.

Shai Gilgeous-Alexander wore a sweater with Allen Iverson stepping over Tyronn Lue to tonight's game against the Clippers. Lue is an assistant on the Clips' staff.

Shai Gilgeous-Alexander has a long way to go to match Iverson’s NBA accomplishments. But it’s not exactly a fair comparison anyways. Iverson was selected first overall by the Sixers in the 1996 draft.

Expectations were much higher for the top prospect out of Georgetown. While SGA might not yet compare to Iverson, he’s still one of the best guards in the league. The 2018 first-round pick is special in his own way.

On December 22, 2021, in the Thunder’s 108-94 win over the Denver Nuggets, Gilgeous-Alexander recorded his second career triple-double. He amassed 27 points, 11 rebounds, and 12 assists in 37 minutes of action.