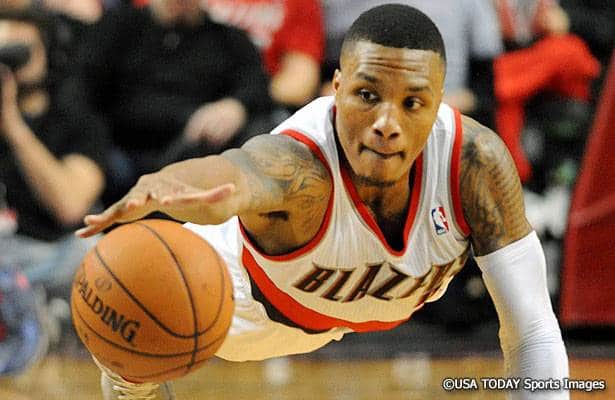 As the NBA season nears the halfway mark it’s time to look at the six things you should know about the Portland Trail Blazers as they begin the second half of the season.

#1 The Blazers Are For Real

After a three-season playoff drought and being a lottery team last season, the Blazers have exploded onto the national scene and are proving to be one of the surprise stories in the NBA. At 29-9, the Blazers currently own the third-best record in the NBA and sit just a game and half behind the defending Western Conference champion San Antonio Spurs for best record in the West.

Head coach Terry Stotts’ offensive game-plan with an emphasis on moving the ball and attacking from the three-point line has been the most important factor to the Blazers’ success. The team is shooting an impressive 39.7 percent from behind the three-point line with 26 attempts being averaged per game. This has allowed the Blazers to not only win close games, but also make impressive comebacks, which they have done several times this season. Stotts’ should be credited with creating so many three-point opportunities by the game-plan of quickly moving the ball along the parameter to find the open man much like the Spurs’ offensive approach that pushed them to the Finals last year. The unselfish play by the Blazers has them averaging 18 assists per game, sixth-best in the NBA.

Another important change contributing to the Blazers’ winning that is different from past years is their ability and confidence to win on the road. While they have been a fierce team at home for years, the Blazers road record of 13-5 is perhaps the key improvement the team has made from last season. The question of if this hot first half start can be sustainable is an obvious one. Victories against major tests like the Spurs, Oklahoma City Thunder, Golden State Warriors, Indiana Pacers and Los Angeles Clippers clearly show the Blazers have quickly evolved to a dangerous team in the NBA. While the Blazers may not be able to keep this winning pace enough to contend for first place in the West by the season’s end, the goal of securing home-court advantage is certainly an attainable one.

#2 LaMarcus Aldridge Has Emerged as a Superstar

From playing second-fiddle to Brandon Roy in the beginning of his career, to struggling to embrace being ‘The Man’ on offense and enduring constant criticism, LaMarcus Aldridge has now fully grown into the player Blazers’ fans hoped he’d be. Averaging 23.8 points and 11.2 rebounds per game, Aldridge is now the ‘go-to’ offensive player in the fourth quarter, sometimes becoming unstoppable with his combination of shooting touch, post moves, speed and strength. Aldridge has also shed the title of ‘soft’ that has plagued him since his rookie year. He is now more willing to fight for rebounds, bang in the post and get to the foul line more often to secure his points as he is on pace for his third All-Star game.

#3 Aldridge States He Wants to Remain in Portland

More important to the Blazers organization than the hot first half, Aldridge recently addressed his upcoming free agency after next season. After rumors swirled in the offseason of Aldridge wanting out, he instead stated he wants to re-sign and stay with the Blazers on another long-term contract. Much still needs to be done before Blazer fans can breath easily as Aldridge will surely demand and command a max, five-year contract. The Blazers’ winning ways will need to continue next year as well, but the news certainly adds some excitement and hope for fans in Portland going forward.

»In Related: Six Things to Know About the Chicago Bulls

Despite Blazers’ GM Neil Olshey’s success bringing the Clippers to contender status in a short period, there were still many questioning if Olshey could repeat his success in a small market with a franchise at a crossroads like the Blazers. The decision to hire the offensive-minded Stotts, draft emerging star Damian Lillard and re-sign Nic Batum are all paying off for the team and has helped expedite the rebuilding process from the Roy-Greg Oden era. Olshey has also committed to trying to accommodate and satisfy his team’s star in Aldridge. Acquiring a true center in Robin Lopez to move Aldridge back to his natural power forward position has also contributed to Aldridge’s happiness and the team’s success. Olshey’s signing of veteran guard Mo Williams cannot be unnoticed either as he has become the lead guard off the bench to help elevate the stress on Lillard. Olshey is following the model of successful franchises like the Thunder and Pacers, building the team from within through the draft and keeping flexibility for the future. If Olshey can convince Aldridge to re-sign and keep the core of this team together, the Blazers will be a playoff contender for some years to come in the West.

In just his second year, Lillard has stepped up to being the team’s leader and star player along with Aldridge and has been the catalyst to the Blazers’ first half success. Averaging 21.6 points and 5.7 assists, there’s no question that he is one of the best young point guards in the NBA. Lillard’s confidence and ice-cold demeanor has been infectious for the Blazers this season as he helps drive the team to keep competing until the final buzzer. This is even more impressive considering the fact that the Blazers are notorious for slow starts, sometimes having to fight back from a double-digit deficit. Lillard is one of the main reasons the team can fight their way back as he shows the maturity to keep the game close even if they are being out-played, giving them the chance to win it in the fourth quarter. Behind his deadly three-point jumper that he is hitting at a fiery 44.5 percent rate, Lillard shows the rare blend to not only shoulder the scoring load if needed, but also keep his teammates involved through Portland’s pass-heavy offense. With injuries to All-Star guards Chris Paul, Russell Westbrook and Kobe Bryant, there is high chance that Lillard will join Aldridge for the All-Star game this year as he has proven in just a season and a half to be an elite NBA player.

#6 There Are Still Issues With the Blazers

Despite the enormous success the Blazers have experienced this season, there are still problems with this team that can’t be overlooked. What has given them success this year can also be the Blazers’ downfall as they heavily depend on the three-point shot to win games. It’s highly unlikely they keep this torrid shooting start going the whole season as they struggle to manufacture points when they’re not shooting well. The few games where the Blazers have struggled from the three-point line show how problematic this is for their offense as they try to force shots or force-feed Aldridge. This causes them to go minutes without points and allows opponents the chance to pull away as the Blazers are merely an average defensive team. This is a major reason why the Blazers play so many close games and at some point the ball will stop dropping in their favor at the end of games.

While improved from last season, depth is still a huge concern as Williams is the only real scoring threat off the bench as newcomer Dorell Wright has struggled in his role and rookie C.J. McCollum is unproven after coming off injury. If an injury were to occur to one of their starting five, it would hurt the Blazers drastically and cause a slip from their high seeding.

»In Related: Six Things to Know About the Orlando Magic