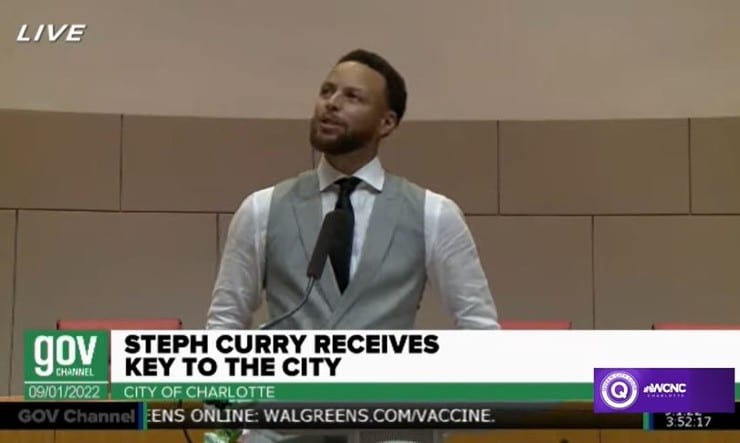 After Golden State Warriors guard Stephen Curry received the key to the city in Charlotte on Thursday, he said that if he played for an NBA team not named the Warriors, it would be the Charlotte Hornets.

“I’ve always said I wanted to finish my career at Golden State because of how much it means and the experiences and teammates and journey we’ve been,” explained Curry.

“Everybody asks me, ‘You wanna play one year for the Hornets and come back?’ I am not breaking any news right now. I’m not making any promises.”

“All I would say is if there was a team that I did want to play for that was not named the Warriors, that would be it. That’s all I can say about that.”

In the YouTube video below, Stephen Curry makes these statements at the 3:59 mark.

Curry has a lot of history in the Carolinas. The Finals MVP was born in Akron, Ohio, but he was raised in Charlotte. As a teenager, he attended Charlotte Christian School.

On Wednesday, the four-time NBA champion was inducted into Davidson College’s Hall of Fame. Of course, the private liberal arts college is located in Davidson, North Carolina. He also received his diploma inside Belk Arena, and his No. 30 jersey was retired.

Stephen Curry: “If I played for a team not named Warriors, it would be the Hornets”

The full graduation ceremony for the 2022 class occurred in May. “This is an absolutely amazing day and an amazing moment for myself and my family,” Curry said after he received his Bachelor of Arts degree in Sociology.

“The best decision I ever made was to come to Davidson College and pursue an education, join an amazing community and, most importantly, play for an amazing man who has built this program in Coach [Bob] McKillop.”

If Curry does play for the Hornets, it won’t be anytime soon. On August 6, 2021, the eight-time All-Star signed a four-year, $215 million contract extension with the Warriors. He’s locked in until the summertime of 2026.

However, there is a chance that Stephen Curry will play for another NBA team. He has favorable odds of leaving the Warriors in the coming years.

Only 47 players in NBA history have played 10 or more seasons with the same franchise. Twenty-nine of the players are in the Hall of Fame. Dirk Nowitzki and Manu Ginobili will make it in one day.