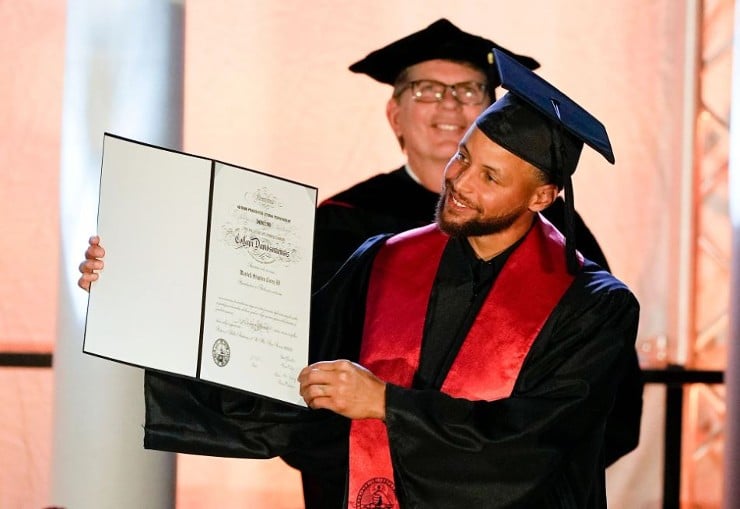 On Wednesday, Golden State Warriors guard Stephen Curry was inducted into Davidson College’s Hall of Fame. The four-time NBA champion also received his diploma inside Belk Arena, and his No. 30 jersey was retired.

“This is an absolutely amazing day and an amazing moment for myself and my family,” Curry said after he received his Bachelor of Arts degree in Sociology. The ceremony itself occurred in May.

“The best decision I ever made was to come to Davidson College and pursue an education, join an amazing community and, most importantly, play for an amazing man who has built this program in Coach [Bob] McKillop.”

He led the Wildcats to the Elite Eight in 2008, upsetting Gonzaga, Georgetown and Wisconsin. However, the school lost 59-57 against Kentucky, the later champions of the 2008 NCAA Tournament.

This was still a big accomplishment for Davidson College. It was the first time the men’s basketball team won a tournament game since the 1969 season.

Curry won Southern Player of the Year in 2009. Not to mention, he was selected to the Consensus All-America First Team.

Furthermore, Curry ended his college career as the Southern Conference’s all-time leading scorer (2,635 points) and set an NCAA record with 162 triples in 2008.

Steph Curry said after his Davidson College graduation today that finishing what you started means a lot to him. Check out this excellent story by my friend @hometownJT who was at the ceremony. #dubnation
pic.twitter.com/w3EpGB0a3d

Davidson president Doug Hicks congratulated Curry as he received his diploma. “Every president at every commencement makes hopeful statements about graduates’ futures,” said the 19th president of the school.

“In that spirit, I hereby predict, with confidence, Stephen Curry, that you will enjoy considerable success in your life and career after college.”

After his college graduation ceremony, Curry said, “It’s not an I have to, it’s an I want to.” One of his goals in life was to receive his degree. While he earns millions playing in the NBA, the guard never referred to himself as a quitter. So, he owed it to himself to finish what he started.