When the Golden State Warriors won the NBA championship in June, doubters were hesitant to give them the credit and respect they deserve. 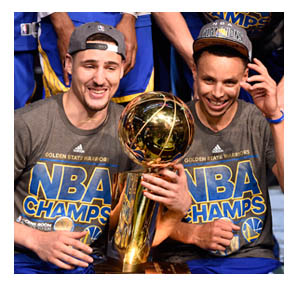 Some felt that the Cleveland Cavaliers would’ve defeated them if their stars, Kyrie Irving and Kevin Love, had been healthy. Others believed that the Memphis Grizzlies would’ve beaten the Warriors in the Western Conference Semifinals had they been at full strength (especially since they had a 2-1 lead over Golden State at one point). Then, there were some critics who pointed out that the Warriors were lucky they didn’t have to face either the San Antonio Spurs or the Los Angeles Clippers – two of the most talented teams in the West – at any point in the playoffs.

Some people even went so far as to suggest that, for some reason, the Warriors’ championship deserved an asterisk. This is crazy, of course, but it shows just how little respect Golden State was receiving.

Then, just weeks after the Warriors hoisted the Larry O’Brien trophy, the basketball world shifted its collective focus to another contender in the West: the Spurs. After LaMarcus Aldridge agreed to a four-year contract with San Antonio on July 4, the Spurs started dominating headlines. The move – followed by the subsequent signing of David West – changed the landscape of the conference and many people started considering San Antonio the favorite to win the title next season. At the NBA’s Summer League, even fellow players were saying the Spurs may be unbeatable in a seven-game series.

Suddenly, the Warriors were being overlooked despite being the defending champs.

But it wasn’t just the Spurs stealing the spotlight from the Warriors. The Cavaliers were also being labeled a potential favorite since they’re bringing back all of their key players and should be much healthier (and more comfortable together in year two). The Clippers got some buzz as well after keeping their talented core intact and adding veterans like Paul Pierce, Lance Stephenson and Josh Smith among others to improve their depth. The Oklahoma City Thunder received some love too since they are getting a hungry Kevin Durant back from injury and are adding a very good head coach in Billy Donovan to lead a roster that has always been very talented on paper.

One of the biggest reasons Golden State wasn’t mentioned more this offseason is because they didn’t make splashy additions. Instead, they spent much of this summer re-signing their own players to keep their title team together. Their biggest addition – power forward Jason Thompson – was acquired in August, but even that move didn’t turn many heads since the former Sacramento King is not a household name (although those who follow the NBA closely know he should help their frontcourt).

However, it must be noted that Golden State didn’t really need to make significant changes this summer because their roster is already ridiculously loaded. While it’s easy to forget since everyone is so focused on other contenders, the 2014-15 Warriors were an all-time great team.

That isn’t hyperbole; the Warriors were just that dominant. Golden State won 67 games last year, which is tied for the sixth-most regular season wins in NBA history. Come playoff time, they won 16 of their 21 postseason games and they never once faced elimination.

They destroyed their opponents on both ends of the court and, for much of the year, Golden State had the NBA’s No. 1 ranked defense (allowing just 98.2 points per 100 possessions) and No. 1 ranked offense (scoring 109.7 points per 100 possessions). As FiveThirtyEight.com noted, the Warriors were “just the fourth team in NBA history to outperform the league average by six points of efficiency on one side of the ball (offense) and by four points on the other (defense).”

And Golden State didn’t just beat teams, they annihilated them. The Warriors were only the eighth team in NBA history to finish a season with a double-digit point differential. And, according to Basketball-Reference, their schedule-adjusted points-per-game margin ranked seventh best all-time.

But here’s the most compelling evidence: FiveThirtyEight.com has a comprehensive stat called Elo rating, which factors in every game – win or loss – a team plays in the regular season and postseason while also taking into account win margins, strength of opponents, where the game was played and more. According to Elo rating, the Warriors were the third-best team in NBA/ABA history behind only the 1996-97 Chicago Bulls and 1995-96 Bulls. And the gap between Golden State’s Elo rating (1796) and those Chicago teams (1802 and 1815, respectively) wasn’t very large.

So we’re talking about a Warriors team that has an argument as an all-time great squad, yet their title was discredited by many and few people are predicting that they’ll repeat as champions this year because other teams look good on paper.

And the scariest thing about this Warriors team is that all signs point to them sustaining this level of success and, in fact, they may even be better in the 2015-16 season. 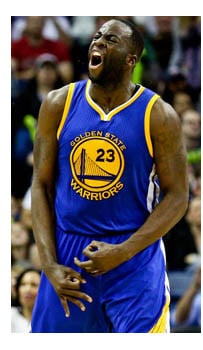 As terrific as Steve Kerr was in his first season as a coach, he should be even better in his second season at the helm of the Warriors since he’ll have valuable experience and his players will be more comfortable playing for him now that they’ve had a full season with him and his system. It’s unfortunate that they lost assistant Alvin Gentry, who accepted the New Orleans Pelicans’ head coaching job, but his concepts and mark on the team will remain.

Also, it’s worth noting that the average age of the Warriors’ starting five is only 26 years old. Yes, this is a team that may still be developing. Klay Thompson (25), Draymond Green (25), Harrison Barnes (23) and Festus Ezeli (25) are very young and they have each been in the NBA just four seasons or less. Also, the reigning MVP Stephen Curry is just now entering his prime at 27 years old.

In other words, Golden State could actually improve on last year’s historically great season if their young players continue to make progress, the addition of Jason Thompson helps their frontcourt and year two under Steve Kerr goes even better since there’s familiarity and everyone knows what’s expected of them.

There’s no question that it’s difficult for a team to repeat as champions, but this Warriors squad may have a better shot than most title winners given their age, well-rounded style of play and, of course, extraordinary talent.

But there’s another (less obvious) reason that Golden State could repeat: the fact that they haven’t been getting the credit or respect they deserve, as I mentioned earlier.

Most teams that win the title start getting cocky or complacent, which can lead to the “championship hangover” that we often hear about in sports. However, this Warriors team has had a very different post-title experience. They’ve watched as their accomplishments have been diminished. They’ve watched as they were replaced in the spotlight almost immediately by other teams. They’ve watched as many people in the basketball community started labeling teams like the Spurs and Cavaliers as next season’s favorites, completely overlooking them in the process.

Marc Spears of Yahoo Sports, who joined the Basketball Insiders Podcast as a guest last week, brought this up. He predicted that Golden State will repeat as champions next season, stating that the players are motivated by all of this hate they’ve received and that they are determined to have an even stronger 2015-16 campaign.

“I’ve been around the Warriors a lot – living in the Bay Area – and being around those guys, I haven’t noticed anyone getting big headed [like some players get after winning a title],” Spears said on the Basketball Insiders Podcast. “I think the one thing that’s driving them is the fact that there’s been so much hate on their championship. Typically, after you win a title, people tell you how great you are. While there has been some of that and I do think they are enjoying their title, there’s also been so much hate. People are saying, ‘Well, if this team wasn’t hurt…’ or, ‘Well, if Kyrie Irving and Kevin Love weren’t hurt…’ And perhaps there’s some truth to that, but the Warriors are still the champs. And I think they don’t feel like they’re getting respected as the champs, and I think that will fuel them.”

Draymond Green admitted that the team feels like they haven’t gotten the credit they deserve.

“I mean, I definitely think there is some disrespect going on,” Green told Basketball Insiders. “But at the end of the day, there will never be an asterisk next to our title in the record books, so it is what it is. And we don’t need any more motivation. We want to repeat, because the feeling of winning that championship was too good. So we don’t need anybody to say, ‘Oh, Cleveland is healthy!’ or, ‘The Spurs have done this and that!’ It is what it is; that’s the NBA. People make moves and people get hurt – that’s the game we play. At the end of the day, it is what it is, but that’s not going to motivate us because we were already motivated and we are looking forward to defending our title and trying to win another.”

To recap: This was a historically great team last year and they brought just about every key player back. They seem poised to keep improving given their age and increased familiarity with each other and their coach. Oh, and they’re still incredibly hungry and, quite frankly, pissed off that they’ve been doubted and overlooked.

Pick against the Warriors at your own risk.