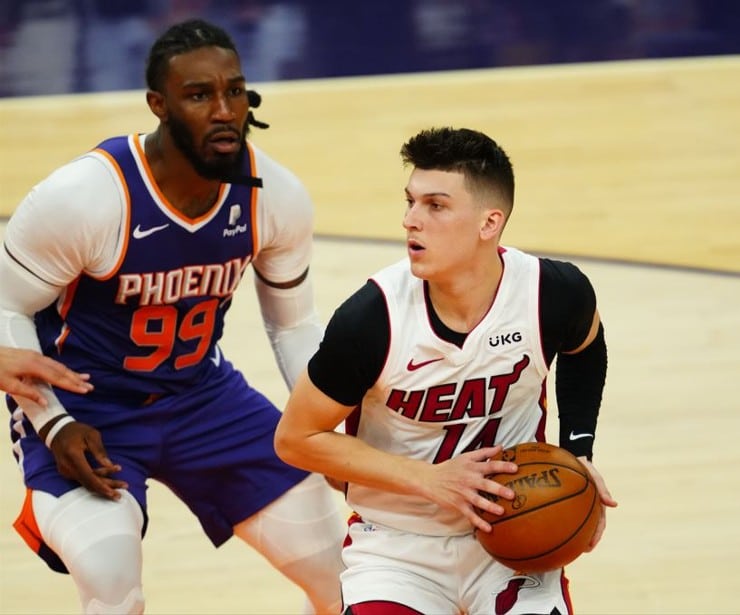 Phoenix Suns forward Jae Crowder would welcome a return to the Miami Heat. According to Brian Windhorst of ESPN and Barry Jackson of the Miami Herald, the Suns are in trade negotiations at the moment.

“A lot of them are centered around Jae Crowder,” explained Windworst when asked about tradable veterans. “Jae Crowder is a player who is available on the market right now.”

Jackson mentioned, “The problem is crafting a deal, within salary cap rules, that would satisfy both teams. It would be surprising if the Suns were willing to take the final four years and $75 million of Duncan Robinson’s deal for Crowder, who is due $10.2 million in an expiring contract.”

“It would be surprising if the Heat were willing to offer a first-round pick in a trade for Crowder,” continued Jackson. “Dewayne Dedmon and Oladipo cannot be traded until Jan. 15, and Oladipo can veto any trade this season.”

In other words, Crowder has an opportunity to leave the Suns before or during the 2022-23 season. Though, a move will only happen if the wing wants it to. It might be more ideal for both playoff contenders to wait until mid-January.

On February 6, 2020, as part of a three-team trade, the Memphis Grizzlies traded Crowder, Solomon Hill, and Andre Iguodala to the Heat; the Heat traded Dion Waiters and Justice Winslow to the Grizzlies; the Heat dealt James Johnson to the Minnesota Timberwolves; and the Timberwolves sent Gorgui Dieng to the Grizzlies.

Crowder was an essential piece to the Heat’s 2020 NBA Finals team. In the Heat’s NBA Finals series loss to the Los Angeles Lakers, the wing averaged 11.2 points, 5.2 rebounds, and 1.2 assists per game.

In 20 appearances with Miami during the 2019-20 season, the forward averaged 11.9 points, 5.4 rebounds, 1.8 assists, and 1.3 steals per contest. He helped bolster head coach Erik Spoelstra’s frontcourt.

During the second round of the 2020 NBA Playoffs, Crowder averaged a playoff series career-high 15.2 points per game against the Milwaukee Bucks.

Well, one thing is for certain: the Suns are a great team with Jae Crowder. Suns G.M. James Jones should convince the forward to continue playing for Phoenix, considering the Western Conference contender is better off with him.