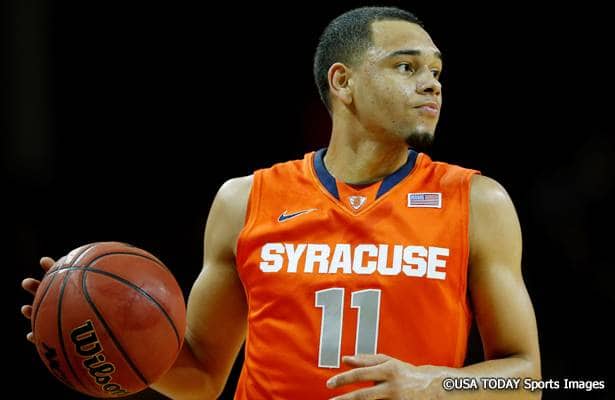 SYRACUSE, N.Y. — Another day, another buzzer-beating finish for the No. 1-ranked Syracuse Orange.

A goaltending call on North Carolina State’s Ralston Turner in the final seconds gave undefeated Syracuse a 56-55 victory over the Wolfpack on Saturday night in an Atlantic Coast League game before 31,572 fans — the fourth crowd of more than 30,000 at the Carrier Dome this season.

Trailing 53-52, the Wolfpack regained the lead on Turner’s three free throws with 1:02 remaining. Before those shots, NC State was just 4 of 11 from the foul line.

Syracuse forward CJ Fair made one of two free throws to pull the Orange within one before Wolfpack guard Desmond Lee lost the ball while trying to dribble out of a trap. But Syracuse guard Tyler Ennis committed an offensive foul to give the ball back to NC State.

Syracuse trapped on the inbounds at the Wolfpack end of the court and Syracuse center Rakeem Christmas intercepted a pass by NC State guard Anthony Barber and fed it to Fair for a fast break. Turner committed goaltending on what appeared to be any easy basket for Fair with about 12 seconds left.

NC State forward TJ Warren missed a jumper with one second remaining as the Orange improved — barely — to 25-0.

“We kept fighting,” Fair said. “We got a couple of key turnovers that we needed for us to win the game. It’s not the ideal win, but we’ll take it.”

On Wednesday night, guard Tyler Ennis’ miracle heave at the buzzer gave the Orange a miraculous 58-56 win over Pittsburgh.

While extending its program-best winning streak to 25, the Orange remained one of only two undefeated teams in Division I. The other one is No. 4 Wichita State (25-0), which plays at Evansville on Sunday.

The Orange and Wolfpack traded the lead for most of the game. After Turner’s 3-pointer gave NC State a 44-42 advantage, Ennis completed a three-point play to give Syracuse a 45-44 lead. Warren’s 3-point play and Turner’s third 3-pointer of the game boosted the Wolfpack’s lead to 50-45.

“That’s the No. 1 team in the nation. They’re a very good team, but we showed how good we were, too,” NC State center Kyle Washington said. “We had the lead. We just needed to execute down the stretch.”

Warren, the Atlantic Coast Conference’s leading scorer at 23.1 points per game, had a game-high 23 points. Washington added 14 points and 10 rebounds.

Syracuse was led by Christmas, who had 14 points and 12 boards, followed by forward Jerami Grant’s 12 points and 14 rebounds.

Neither team led by more than four points in the first half. Warren scored four points during a 6-0 run that gave NC State a 26-22 lead, but Fair’s drive and Orange guard Trevor Cooney’s dunk on a fast break tied the score at 26.

“When you have a year like they’re having — you’re undefeated — you’re going to have some close ones,” NC State coach Mark Gottfried said. “We just tried to prepare for them the best we could, and I thought our guys did a great job with that.”

Syracuse is the 12th team in the ACC’s 61-year history to win its first 12 conference games. Of the previous 11, eight of them won the ACC Tournament, five reached the Final Four and two won the national title (North Carolina in 1957 and NC State in 1974).

At 12-0 in conference play, the Orange is bidding to become the ninth ACC team to post a perfect regular season and the first since Duke in 1999. The 1976 Indiana Hoosiers was the last team to finish an entire season undefeated.

“We’ve played the easiest games on our schedule,” Syracuse coach Jim Boeheim said. “Our next six games will be much harder, especially the four of five road games at the end of the year.”

NC State, which had won five of its six previous games, dropped to 16-9 and 6-6 in the ACC. With an RPI of 51, the Wolfpack remain on the bubble for a NCAA Tournament bid.

“I started to think we were going to get out of here with a win,” Turner said. “Give credit to them, they made a play at the end.”