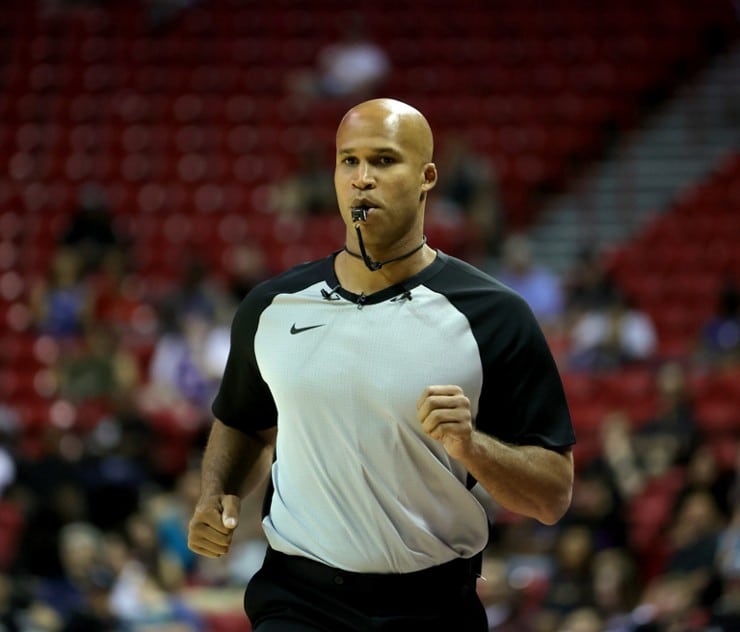 Richard Jefferson played 17 years in the NBA before working as a color commentator, and now he has made his debut as an NBA referee during the Summer League. According to the tournament rotation schedule for officials, the 42-year-old was listed to officiate the second quarter of the Knicks vs. Trail Blazers matchup on Monday night.

Leading into his referee debut, Jefferson was required to attend daily NBA Summer League officiating meetings in Las Vegas. Anyway, the former player is thrilled to have the opportunity to work as an official in the NBA, but he will have to endure a lot of fan criticism in order for this job to work. This should be interesting.

During the second quarter, Jefferson blew his whistle after the ball went out of bounds. He originally signaled for a Knicks possession. He was heard saying “white ball” after the play was over. Though, his decision was altered seconds later after discussing it with a fellow official. It was Trailblazers ball. How much worse is Jefferson compared to all the other NBA officials? There are terrible calls in every game.

.@Rjeff24 changed his first-ever call as an NBA official 😅 pic.twitter.com/F9ffWzUs79

To make matters worse, Jefferson was spotted by viewers giving high fives to fans on the courtside. They were probably just wanting his attention because they want to see him succeed. After all, he won a championship with the Cavaliers in 2016. He was a chill player.

And he’s famous for making broadcasting appearances on ESPN, YES Network and Pac-12 Network. However, it’s unprofessional for referees to give high fives to any individual on the court during the game. It’s a good thing this is just the Summer League.

Furthermore, NFL fans witnessed something similar after the New England Patriots scored a touchdown against the Jacksonville Jaguars in the 2017 AFC Championship. One referee was seen laughing and jumping for a few seconds near the endzone with Patriots players after the score.

Jefferson wants his officiating experience to be educational

Additionally, on Twitter, Richard Jefferson tweeted: “Why do this? 1. Tremendous amount of knowledge about our game that I’ve learned sitting in classes with the best refs in the world 2. I do this because not many people would dare put themselves in this position. The more info I have the more informed I am as a broadcaster.” In other words, the shoe is now on the other foot.

While Jefferson has probably heard it all from fans as an NBA player, the experience is different as an official. In the minds of diehard sports fans, referees are always expected to get the correct calls. Nonetheless, this will never happen, at least not with humans.

Why do this?
1. Tremendous amount of knowledge about our game that I’ve learned sitting in classes with the best refs in the world
2.I do this because not many people would dare put themselves in this position. The more info I have the more informed I am as a broadcaster 🫡

Even if Jefferson is unsuccessful as an NBA referee, his legacy is set in stone. The guy played for eight teams over the course of his 17-year career. He was selected 13th overall by the Rockets in the 2001 NBA Draft, but his draft rights were immediately traded to the Nets.

Along with the Nets, Jefferson played for the Bucks, Spurs, Warriors, Jazz, Mavericks, Cavaliers and Nuggets.

Jefferson is one of the most entertaining basketball announcers, and his personality makes him likeable among fans. Other articles related to Richard Jefferson are on the main page.