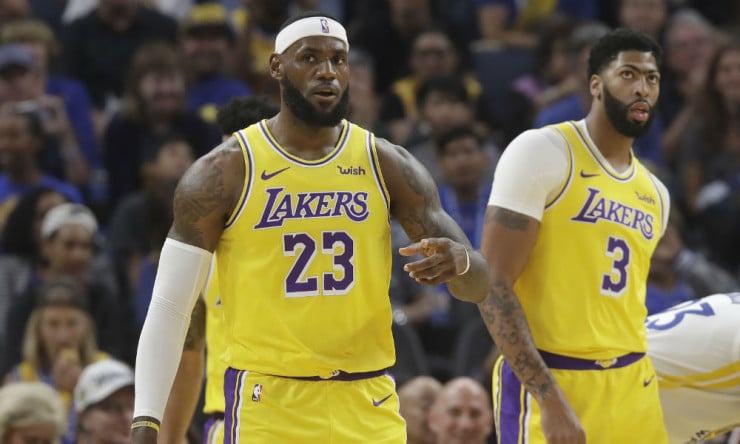 Needless to say, 2020 forced us all to accept uncertainty in all facets of our lives – and that includes sports. As a result of the COVID-19 pandemic and the possibility of missed games, the NBA did not announce a complete schedule entering the 2020-21 season.

But the NBA – as well as most of the sports world – continues to forge ahead through the pandemic, hosting fans and even holding an abbreviated All-Star Weekend. More to the point, the NBA is now comfortable enough with its product through the first two or so months to announce its schedule for the rest of the way.

There are a number of interesting takeaways from a delayed schedule release. The biggest of all, perhaps, is that the Los Angeles Lakers have a relatively easy schedule the rest of the way, which should aid them as Anthony Davis works his way back from an Achilles injury. The New York Knicks, who haven’t qualified for the postseason since 2013, will end their season on a hellacious west coast trip, might it derail their playoff hopes? Further, we found out that fans are the real winners, with 44 nationally televised games between Mar. 14 and May 10, airing on ABC, ESPN and TNT.

With that in mind, let’s examine the five most intriguing matchups of the second half of this year’s regular season.

This is a New York thing. Pride is on the line. The Nets have only been New York City residents for nine years – still, they’ve had more success in their short time within the boroughs than their New York neighbors. Worse, now the Nets look poised to compete for a championship with James Harden recently joining Kyrie Irving and Kevin Durant in Brooklyn. All that comes after convincing Durant and Irving to join the Nets instead of relocating to Manhattan.

But the Knicks appear to be on the upswing themselves, currently in possession of the sixth-best record in the East. That culminates in a hostile matchup between division rivals for city-wide bragging rights. Let’s throw in, 2,000 or so basketball-starved fans in the World’s Most Famous Arena, and you have a recipe for drama.

4. Denver Nuggets at Utah Jazz, May 7

Simply put, Jazz/Nuggets games are everything that’s good with basketball. It involves two very good teams, who also happen to be division rivals, and great individual matchups. One team features the best defensive center in the NBA. The other has, possibly, the most unique offensive center in the history of the game. They both feature great shooting guards – one is more of a freak athlete, while the other is more of a technical assassin.  They both boast solid role players, but at different positions. Utah possesses the third-best offensive rating in the league, while Denver sports the fifth-best. They are also the third- and fifth-best three-point shooting teams in the league, too. Adding to the matter, they put on possibly the best series in the 2020 NBA playoffs from inside the bubble.

Basically, the more Jazz versus Nuggets games the better.

This one is for the purists. It features the ultimate clash of styles, with the league’s best offense – Brooklyn boasts an offensive rating of 119 – bumping heads with the second-best defense in Utah. Interestingly, the Nets do play the Lakers, who currently own the league’s best defense, in early April, but with Davis’ return up-in-the-air, it’s hard to place too much significance on that matchup.

And the Nets/Jazz game is probably more interesting to basketball fans, anyway. There are intriguing individual matchups like Mike Conley/Kyrie Irving and Donovan Mitchell/James Harden to watch. There’s also the issue of the Jazz dealing with Durant, should he return in time, and the Nets’ subpar bigs against the league’s best defensive center. Plus, the idea that the Jazz, hailing from a significantly smaller media market, are less established and unknown – a complete fallacy, of course – will play into the intrigue around them down the stretch.

If that weren’t enough, the Nets are one of the league’s hottest teams, having won eight of their last 10 games. And the Jazz are even hotter, boasting the league’s best record and winning nine of their last 10. The two teams have played only once this season, an early January affair that resulted in a 34-point Brooklyn win, so there’s still lots of feeling out to be done. Still, this one has NBA Finals preview written all over it.

Upon first glance, it makes little sense to include this matchup with these other high-stakes games. But let’s remember, LeBron James in Madison Square Garden is must-see TV. He dropped 50 points at MSG in 2008, 52 in 2009 and he secured a 32-point triple double in 2010. While James is extremely likely to return next season (and possibly beyond) in an attempt to unseat Kareem Abdul-Jabbar as the NBA’s all-time scoring leader, he is currently 36. Any minor tweak can have long lasting implications. So while James still has all of his powers, we can probably agree that LeBron at MSG is an event that supersedes the regular season.

Lakers/Clippers has been the rivalry in the NBA since the start of the 2019-20 season, so it shouldn’t be a surprise to anyone to see it on this list. The rivalry might seem a little watered down due to the fact that they’ll play each other again before May – but this one will be far more important for two reasons. First, while Davis may not return before their Apr. 4 matchup and, if he does, he’s likely to be on a minutes restrictions. Beyond that, it’s entirely unlikely that he doesn’t return prior to this one so seeding – and possibly even the division crown – could be on the line. Granted, in a Los Angeles-Los Angeles, Western Conference Finals, seeding makes no less difference than usual, but it could make all the difference in literally every other playoff scenario. This game is prime time stuff. Think Brooklyn versus New York with actual, real-time ramifications.

The NBA schedule is usually released before the season without much fanfare. But the COVID-19 pandemic has changed things, and now even the release of the second-half of the season’s schedule is an event. And while it might seem forced to some, this write says the more basketball activities – and ultimately games – the better.