Whenever an NBA player is traded midseason, there is typically a difficult adjustment period. Some players get acclimated quicker than others, but there’s no question that it’s a hectic time for the individual. The player must uproot their life in an instant and then figure how to succeed in a different city and system with new teammates and coaches. It’s often a culture shock – on and off the court.

And Tobias Harris’ adjustment from the Orlando Magic to the Detroit Pistons is arguably even tougher than most. That’s because Detroit acquired the 23-year-old forward with the hope that he would be a big-time contributor and one of the Pistons’ leading offensive weapons going forward.

Upon joining the team, Harris became their highest-paid player (earning $16 million this season), raising the pressure even more. Not to mention, he’s learning from Stan Van Gundy, who is the Pistons’ head coach and president of basketball operations. Van Gundy is a bona fide basketball genius, but he is known as a perfectionist who can be hard on his players. If the two can stay on the same page and work well together, Van Gundy should get the most out of Harris and be excellent for his development. But make no mistake, there will likely be a lot of screaming along the way. 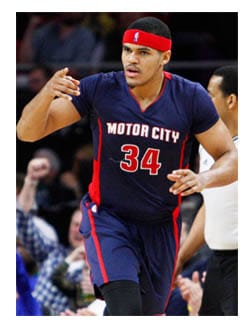 Now, as the Pistons make a playoff push in the Eastern Conference, Harris is a key piece for his new franchise. He joins a young core that also includes Andre Drummond, 22, Reggie Jackson, 25, Stanley Johnson, 19, and Kentavious Caldwell-Pope, 23, among others. This group has a ton of potential and, if all goes as planned, they should be a threat in the Eastern Conference for years to come.

However, Van Gundy isn’t the type of coach to sit on his hands and wait for results. He’s determined to end the Pistons’ six-year playoff drought this season.

Detroit is currently 34-33, putting them in ninth place in the increasingly competitive East. In the past, being a .500 squad is typically all it took to be a playoff team in the East, but not this year. Right now, the Pistons have the same record as the eighth-seeded Chicago Bulls, but Detroit doesn’t hold the tiebreaker. Fortunately for the Pistons, the Bulls have been struggling as of late – dealing with injuries to key players and dropping 11 of their last 17 games. The Pistons are on the verge of entering the playoff picture in the conference and a trip to the postseason is a realistic goal at this point.

The addition of Harris has certainly helped the Pistons as they battle for a playoff berth. Detroit has won seven of its 11 games since acquiring Harris, and that includes impressive victories over talented teams like the Cleveland Cavaliers, Toronto Raptors, Portland Trail Blazers and Dallas Mavericks among others.

Those stats are up from his Orlando numbers. In Harris’ 49 games prior to the trade to Detroit, Harris’ scoring average (13.7 points) with the Magic was his lowest since becoming a full-time starter in the NBA. It was a disappointing regression for Harris, who was expected to elevate his game with the Magic after inking a four-year deal worth $64 million this past offseason.

Detroit actually showed interest in Harris over the summer when he was a restricted free agent, but they didn’t extend an offer sheet since it was no secret that Orlando wasn’t going to let him walk away and lose a key asset without receiving some form of compensation.

But what makes the acquisition of Harris even sweeter for Detroit is that they didn’t have to part with much to add him. The Pistons only shipped out veterans Ersan Ilyasova and Brandon Jennings in the deal. The move was widely regarded as a steal for the Pistons since they didn’t have to give up a draft pick in the transaction. (By comparison, the Washington Wizards and Los Angeles Clippers had to part with first-round selections to add Markieff Morris and Jeff Green, respectively).

Harris was one of the most talented players to change teams prior to the deadline last month, so it was a bit surprising to see him dealt for so little. Jennings’ deal is expiring after this season, making him an unrestricted free agent. As for Ilyasova, only $400,000 of his $8.4 million salary for next year is guaranteed so he can be waived to create cap space, flipped in another trade, or kept by Orlando since he does provide some much-needed shooting to spread the floor. Still, Harris was a young starter who just signed a long-term deal, yet he was moved for veterans who aren’t even starting for the Magic.

League sources told Basketball Insiders that Orlando had some other intriguing offers on the table for Harris, but general manager Rob Hennigan ultimately opted for the Pistons’ package since Jennings and Ilyasova are veterans who can score the ball and – most importantly – had each spent several years playing under Magic head coach Scott Skiles on the Milwaukee Bucks. The belief was that they could hit the ground running, create some momentum for Orlando and help the team climb in the standings. Orlando, like Detroit, entered this season with playoff aspirations; however, they are currently 29-37 (which is 11th in the East and four-and-a-half games outside of the conference’s final playoff spot).

While Harris has only appeared in 13 games for Detroit (with 11 starts), he has drawn rave reviews from Coach Van Gundy.

“He’s a really smart guy. He’s got a great temperament,” Van Gundy told Pistons.com. “He’s a good team guy. I don’t know what the players would say [but] to me, it feels like he’s been with us all year. You’re not feeling like you’ve got a new guy that’s acclimating. You feel like he’s been here all year, even in terms of the way he relates to his teammates. It’s actually been a pretty seamless transition. He’s unselfish. He’s been efficient. He hasn’t needed an inordinate amount of shots to get his stuff done. He moves the ball pretty well. It’s actually been pretty easy.”

Harris’ new teammates seem to love playing with him as well and believe he’s exactly what the team needed.

“He looks great,” Drummond told reporters when asked about Harris. “He’s doing all of the things that we need him to do. When he first came here, I told him, ‘Don’t hesitate. We’re not here to play slow. We want you to run and we want you to try to score the ball when you touch it. If you don’t have anything, free somebody else.’ He came in and he looks great.”

“I’m still trying to figure out Tobias’ game, but I know he’s a great addition to our team, that’s for sure,” Stanley Johnson told Pistons.com. “What I have figured out this far is he puts the ball in the basket and he’s an invaluable leader to our team. He’s a great locker room guy. He’s a great person to hang around, another weapon on our team that we can use in various ways. Especially on the defensive end, we can switch a lot of things.”

The team is hoping that Harris’ versatility and scoring ability can help them improve their offensive efficiency (102.6 points per 100 possessions) and pace (97.6), both of which rank 19th in the NBA.

Harris takes pride in his efficiency, so he could help Detroit in that category. As previously mentioned, his PER of 18 with Detroit thus far is the highest of his career. The forward has been a relatively efficient player throughout his career, especially when put in a proper system that utilizes his strengths and offers structure (which didn’t always happen in Orlando, particularly under former head coach Jacque Vaughn).

“I like to be an efficient player and take efficient shots – shots I know I can make and high percentage shots,” Harris said. “[I] just feed off the other guys. I think that’s one of my best aspects of the game is feeding off everybody else.”

This is Harris’ second time being dealt in a move just prior to the trade deadline. The Bucks shipped Harris (along with Doron Lamb and Beno Udrih) to the Magic in February of 2013 in exchange for J.J. Redick, Ish Smith and Gustavo Ayon.

Harris was just 20 years old and a season and a half into his NBA career. It was his introduction to the business side of the NBA, but the move actually ended up being the best thing to happen to Harris’ career. He went from warming the bench in Milwaukee (averaging 4.9 points and 2.0 in 11.6 minutes) to being a focal point in Orlando (averaging 17.3 points, 8.5 rebounds, 2.1 assists and 1.4 blocks in 36.1 minutes that same season). The change of scenery turned Harris into an attractive asset and allowed him to get last summer’s big pay day. He’s hoping this most recent trade works out just as well.

“For me, my whole thing is go out there and play as hard as you can and [you get] rewarded from that. That’s the mindset that I’ve always played with since I got in the NBA and that’s just how I look at the game. I don’t worry about anything else [and] just go out there, play as hard as I can and have fun.”

Harris’ first impression of the Pistons organization has been very positive. Not only does he have a lot of respect for Van Gundy, he’s excited about the group of up-and-coming players that has been assembled.

“Obviously we have a lot of young, athletic players, a lot of length out there,” Harris told reporters. “It helps having Andre in the paint also. He helps clean up a lot of stuff off of the glass. Coach puts us in good positions defensively to make plays and to help each other out. A big thing that we’re trying to do is shrink the court and make it hard for teams to attack the middle.

“I just think as a team we’re playing team basketball and we’re all looking for each other. We’re really playing unselfishly and that’s the name of the game.”

The sample size is small and this is certainly still the honeymoon period for Harris and the Pistons, but the trade sure looks like a great one for both parties thus far. If Van Gundy can continue to develop Harris’ overall game and help him reach his full potential, the Pistons may have added another cornerstone to their already impressive, promising nucleus. It seems like a low-risk, high-reward move that could pay off in a big way for Detroit.

And it’s safe to say that Harris is thrilled with his current situation.

“I love our team,” Harris told Pistons.com. “I love our core that we have here and I love everything about the city and the organization. So I’m happy and I’m excited.”