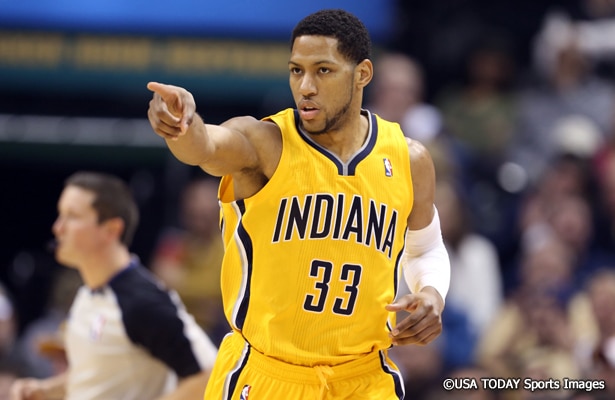 According to Adrian Wojnarowski of Yahoo! Sports, the Indiana Pacers have traded veteran forward Danny Granger to the Philadelphia 76ers in exchange for forwards Evan Turner and Lavoy Allen.

Granger, a former All-Star and once unquestioned leader in Indiana, had witnessed his role significantly diminish due to the rise of Paul George and troublesome knee injuries.

There were plenty of rumors of the Pacers moving Granger throughout the summer and into the beginning of the season, but those talks cooled dramatically until this week’s deadline frenzy. Granger has undoubtedly lost a step in his game but the Pacers were intent on receiving some value for the veteran as opposed to losing him for nothing in return this summer in free agency.

In Turner, the Pacers receive a 25-year-old player in the midst of a career year with averages of 17.4 points, six rebounds and 3.7 assists on the season. Turner is also headed to (restricted) free agency this summer, but the Pacers will be able to match any offer received for his services around the league should they extend a qualifying offer.

Indiana has made it a priority to avoid the luxury tax and the acquisition of Turner also gives them a measure of insurance in the event emerging forward and free agent to be Lance Stephenson’s asking price becomes too high this summer.

While Granger was averaging just 8.3 points per game this season adjusting to his bench role, there is no question the Pacers’ young core inherited much of their fighting spirit from him.

If you can recall during the 2012 playoffs, Granger’s never-back-down attitude in the Eastern Conference Semifinals versus the heavily favored Miami HEAT provided a spark of confidence in George and All-Star center Roy Hibbert, which can be heard today when they talk about facing their rivals.

Chemistry is one of the most underrated aspects in building a title contender and the Pacers lost a huge bit of their foundation, even if the franchise’s overall talent level was elevated in the process.

The expectations in Indiana are to hoist the Larry O’Brien trophy at season’s end. The road to a championship is filled with adversity that forces teams to show a winning character. Granger is battled tested and had outstanding chemistry with the Pacers. Turner has playoff experience, but hasn’t been through the fire with his new teammates and there will be an adjustment curve to be sure.

The Pacers are putting in all of the chips for an NBA title this season. Acquiring Turner, on paper, inches them closer to their goal. But games aren’t played on stacks of loose leaf sheets, so time will tell if the risk of sacrificing chemistry was ultimately worth it.