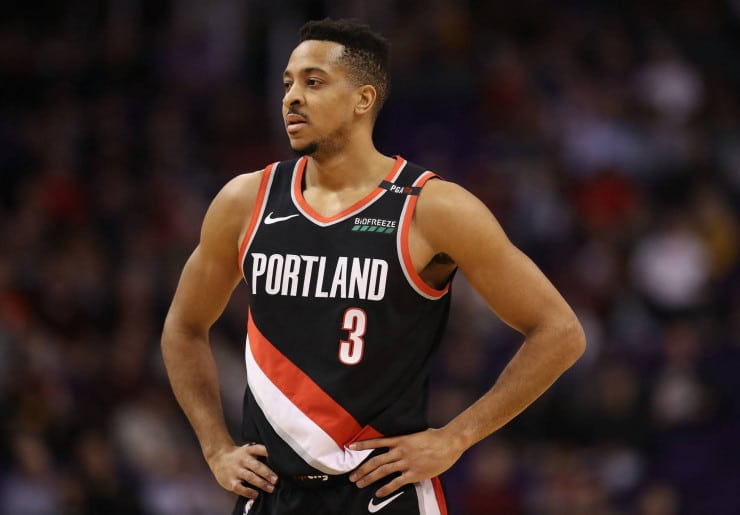 According to the Portland Trail Blazers front office, they are not actively shopping shooting guard CJ McCollum for a trade. Is this the truth? One rumor concerned the possibility of the Philadelphia 76ers trading Ben Simmons to the Trail Blazers. However, Portland general manager Neil Olshey is unwilling to surrender a first-round pick for Simmons. Philadelphia’s asking price is too high. In the 2020-21 NBA season, McCollum averaged 23.1 points, 3.9 rebounds and 4.7 assists per game in 47 games played. He also shot 45.8 percent from the field and 40.2 percent from behind the arc. Last season, the 29-year-old tied his career-high average for points per game in a season. Not to mention, he had a career-high player efficiency rating (PER) of 20.8.

In mid-January, McCollum sustained a hairline fracture in his left foot and a mid-foot sprain. He had to sit out for about eight weeks. In his absence, Damian Lillard balled out, averaging 28.8 points, 4.2 rebounds and 7.5 assists. On the topic of potential offseason trade moves, Lillard told the media, “I don’t disagree that maybe Chauncey can change our team and make us a better team. But I think if you look at our team as it is, I don’t see how you say ‘this is a championship team, we just need a new coach…’We need to be more urgent.” The organization hired Chauncey Billups on June 27th. There might come a time when Lillard wants out, such as for the 2022-23 season, but he seems to be willing to want to give Coach Billups a chance first.

"It sounds like Portland is not actively shopping (CJ) McCollum… The general tone I’ve heard is the Blazers won’t move him just to have a different look next season."@jwquick shares what he's heard and what he's thinking about the Blazers' offseason: https://t.co/QGDgFys2nJ pic.twitter.com/wYzIdRcDbe

Last season, the Trail Blazers finished 42-30 (.583), ranking sixth overall in the Western Conference. In Portland’s first-round playoff series against the third-seeded Denver Nuggets, the eighth-year player averaged 20.7 points, six rebounds and 4.3 assists per game. Nonetheless, the Trail Blazers lost the series four games to two in Game 6. The 2013 10th overall pick scored his second-most points (124) in a playoff series of his career versus Denver. In the 2019 conference semifinals, McCollum scored 185 points against the Nuggets. Portland lost that series in Game 7.

Last week, Portland signed Hornets free agent center Cody Zeller to a one-year contract. Despite the organization not yet making their own “Westbrook-Lakers” blockbuster major trade this offseason, they did hire a new head coach and signed Zeller, who is usually a terrific player when he’s healthy. He played in 48 games last season. In the 2020-21 season, Zeller missed games due to left shoulder bursitis and a left hand fracture. In the season opener, he broke his ring finger while guarding Cavaliers center Andre Drummond, who now plays for the 76ers.

Anyways, on July 30, 2019, the Ohio native signed a multi-year extension with the Trail Blazers. McCollum earned $29,354,152 last season. The guard is set to earn $30,864,198 next season and $33,333,333 in the 2022-23 season. This past Saturday, McCollum was elected president of the National Basketball Players Association (NBPA), succeeding Chris Paul. Since 2018, the guard served as a vice president on the NBPA’s executive committee.