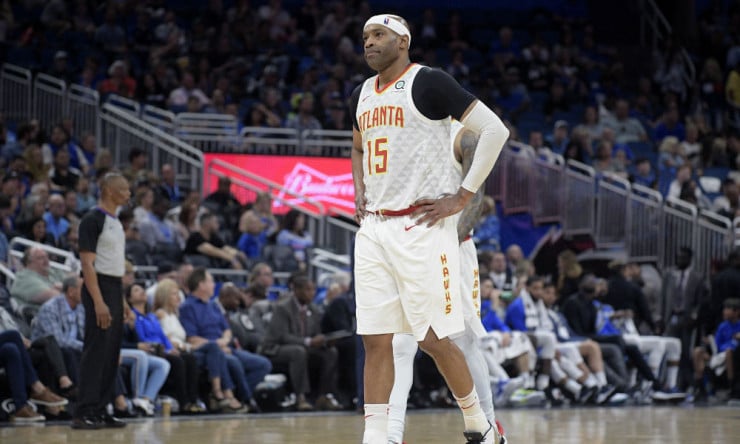 As the league has moved towards a focus on speed and floor-spacing, bringing about greater stat lines and more exciting contests, it’s easy to see how players would struggle to play into their 40s, or even get close. The NBA is a young man’s game more now than ever, so it’s very impressive to see some of the elder statesmen still being able to pull their weight and help a team throughout the season.

Many professional basketball players have kept going into their 40s, with the likes of Dirk Nowitzki, Manu Ginobili, and Jason Terry clocking in games as 40-year-olds over the last couple of years. However, Vince ‘Vinsanity’ Carter stands out among his peers.

Legend of the Slam Dunk Contest, Carter continues to ply his trade at the highest level of men’s basketball in the USA, edging ever-closer to marking his name as one of the very oldest players to ever play in an NBA game. While we look at which players Carter will be looking to surpass, we’ll also have a look at the players following ‘Vinsanity’ up the ladder.

Third on the list, as it stands, is the former center of the Golden State Warriors, Boston Celtics, Charlotte Hornets, and Chicago Bulls who became an NBA champion four times: Robert Parish.

The seven-footer has gone down as one of the league’s best-ever big men, with the Celtics going on to retire his ‘00’ jersey. Now a Basketball Hall of Fame honouree, Parish played at the age of 43 years and 254 days.

Coming in at second on the list is another seven-footer with Kevin Willis playing through until he was 44 years and 224 days old, retiring in 2007.

The center/power forward played for eight different teams throughout his storied NBA career, enjoying two spells with the Houston Rockets and the team that drafted him 11th overall in 1984 – the Atlanta Hawks. In what would prove to be one of his final seasons, Willis hoisted the NBA Championship with the San Antonio Spurs in 2003.

Heading up the list of the oldest player in NBA history is Nat Hickey, who played professionally from 1921 for Hoboken St. Joseph’s to 1948 with the Providence Steamrollers.

This was, of course, back when there was the Basketball Association of America – which Hickey featured in for two games – and the National Basketball League. The second of Hickey’s two appearances for the Steamrollers, who he was coaching at the time, clocked him in at 45 years and 363 days old.

Known for his affinity for a three-pointer, Kyle Korver hasn’t been a regular starter in the NBA since moving from the Atlanta Hawks in 2016. However, the 6’7’’ guard continues to play an important role for a vibrant team.

Now with the Milwaukee Bucks, Korver averages close to 16 minutes per game and a .486 three-point percentage despite closing in on being 39-years-old. While Giannis Antetokounmpo will receive the most credit if the Bucks manage to go all the way and win the NBA Championship – of which they can currently be found at odds of +600 to achieve this if you opt to bet online using some of the various American providers which each have their own welcome offers – Korver will certainly be there to contribute.

A good couple-hundred days older than Korver and set to appear in the NBA at some point this season is Pau Gasol. The hefty Spaniard has missed the start of the 2019/20 season recovering from foot surgery, but when he returns to the Portland Blazers, he’ll clock in at over 39 years and 128 days old.

Udonis Haslem has signed back with the Heat for his 17th season pic.twitter.com/C1oviR4LTr

The second oldest player still active in the NBA looked set to retire last season, with basketball outlets reporting that Udonis Haslem was ready to hang up his jersey. Over the summer, however, the Miami-native signed another contract to extend his stay.

Haslem has been with the Miami Heat since the 2003/04 season, previously going undrafted in 2002. Playing for the city of his birth, Haslem has won the NBA Championship thrice and is still on the team, making his first appearance this season on November 12 at the age of 39 years and 156 days.

Then, there is Vince Carter. Having been taken fifth overall in the 1998 NBA Draft, there were always high hopes for Carter, but few expected him to play into his 40s. Earning the nickname ‘Vinsanity’ for his enigmatic dunks and leaping, it’s a wonder how the forward can play after so many years of taxing acrobatics.

The king of the Slam Dunk Contest is, at the time of writing, 42 years and 290 days old. If, or rather, when Carter plays a game at any point after November 24, he’ll move up to fourth on the all-time oldest NBA players list. From there, he’ll need to play into next season if he wants to usurp Robert Parish and reach the top three.

Regardless of if he makes it into Parish’s spot, Vince Carter is already making history at 42-years-old. This is his 22nd season in the league, which is a record. When he plays a game in 2020, he’ll then become the first-ever player to compete in the NBA in four different decades, having embarked on his rookie season in 1998/99.

It seems very unlikely that anyone will ever catch Nat Hickey, but as far as more modern basketball goes, ‘Vinsantiy’ looks primed to set a record that no player will catch in the foreseeable future.