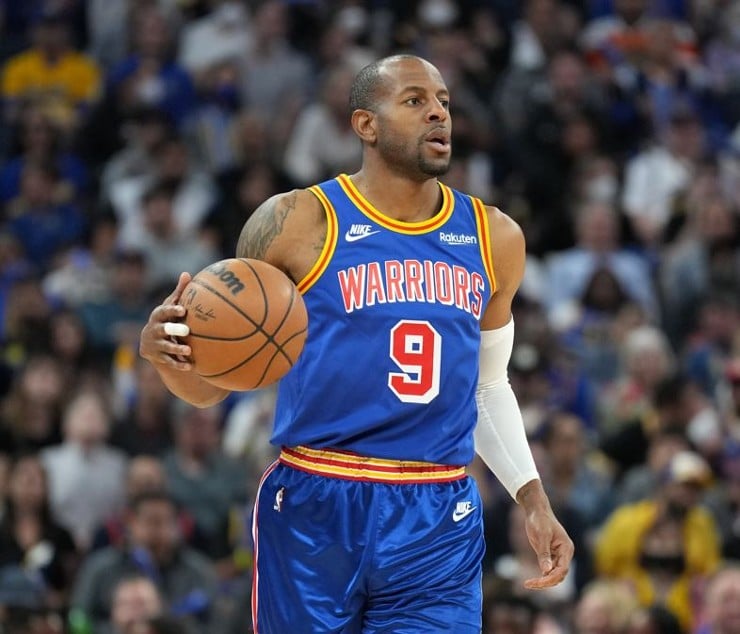 The Golden State Warriors have one final roster spot open, and G.M. Bob Myers wants to reserve the spot for Andre Iguodala. The All-Star forward has played seven seasons with the team.

Iguodala was selected ninth overall by the Philadelphia 76ers in the 2004 NBA Draft. From 2004–12, the wing played for the Sixers. In the 2007-08 season, he averaged a career-high 19.9 points per game with Philadelphia.

After eight seasons with the Sixers, the team traded the wing to the Denver Nuggets. In the 2012-13 season, through 80 appearances, Iguodala averaged 13 points, 5.3 rebounds, 5.4 assists, and 1.7 steals per game.

Of course, after the 2012-13 season, the Nuggets traded Iguodala to the Warriors.

Following the 2018-19 season, the Warriors dealt him to the Memphis Grizzlies. He’s bounced around the league over the course of his playing career. Arguably, Iguodala was at his best in the playoffs with Golden State.

Furthermore, on February 6, 2020, the Grizzlies traded Iguodala, Jae Crowder, and Solomon Hill to the Miami Heat for Dion Waiters and Justice Winslow.

He signed a multi-year contract with the Heat on February 6, 2020. Later in the year, while in the Orlando bubble, the Heat advanced to the 2020 NBA Finals to play against the Los Angeles Lakers.

It was Iguodala’s sixth consecutive Finals appearance. He became the 10th player in NBA history to make it to six straight Finals.

Though, LeBron James and the Lakers defeated the Heat in six games. In the 2021 offseason, the Heat declined his $15 million team option, allowing him to become a free agent.

Following that move, the wing signed a deal to return to the Warriors. In 31 games played last season, Iguodala averaged 4 points, 3.2 rebounds, and 3.7 assists per game. From January to April, he missed about 31 games due to back soreness.

The 18-year veteran turns 39 in January. So, even if Myers re-signs the forward, there’s no telling how many games he’ll appear in. He’s not getting any younger.

On that subject, Andre Iguodala is also contemplating retirement. Considering he won four rings with the Warriors, he’s had a decent NBA career. But was last season it? Fans will know soon enough.