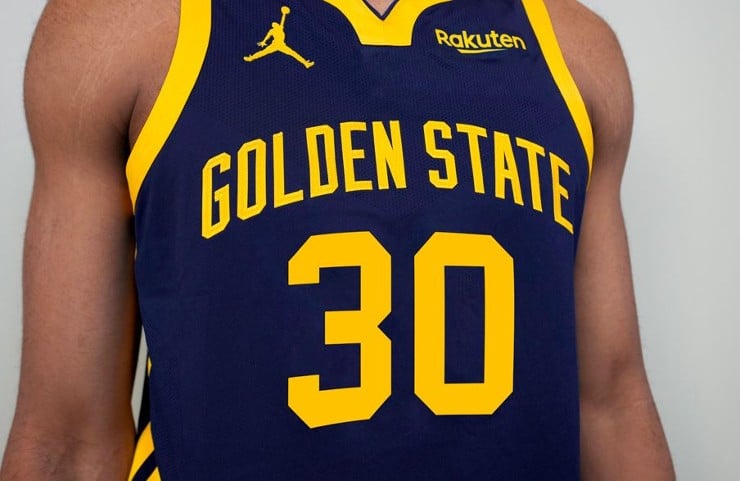 Plus, the Warriors basketball logo will appear on the left side of the shorts.

For the Statement Edition uniforms, “Golden State” will be visible across the chest. This will be the first time since 1975 the city name will be distinguishable on the front of the jersey.

The Nike logo at the top right of the jersey looks neat as well. The Statement Edition uniforms look similar to the University of Michigan football jerseys.

Of course, from 1962–71, the team competed as the San Francisco Warriors. From 1946–62, the team played as the Philadelphia Warriors.

In 1971, the team officially became known as the Golden State Warriors. Notable stars in the ’90s include Mitch Richmond, Chris Mullin and Tim Hardaway.

Mullin played the first 12 seasons of his NBA career with the Warriors. He averaged a career-high 26.5 points per game with Golden State in the 1988-89 season. Mullin is featured in the Twitter video above, unveiling the team’s new uniforms.

Furthermore, in the early ’90s under head coach Don Nelson, the Warriors advanced as far as the conference semifinals in the 1990-91 season. They finished 44-38 (.537), and the team went on to lose in five games against the Los Angeles Lakers.

Then, after finishing 55-27 (.671) in the 1991-92 season, Nelson won Coach of the Year. The team finished second overall in the Western Conference standings. Two seasons later, Chris Webber also won Rookie of the Year.

Anyway, for the first time since 1997, the jerseys will display a “Captain’s badge” on the jerseys of the Warriors’ captains next season.

Entering the 2022-23 season, the Golden State Warriors are aiming to repeat as champions. In the 2022 NBA Finals, they defeated the Boston Celtics in six games.

The Warriors won their fourth championship in eight years and seventh title overall in franchise history. It was also the fourth title won with Curry, Klay Thompson, Draymond Green and Andre Iguodala together under head coach Steve Kerr.