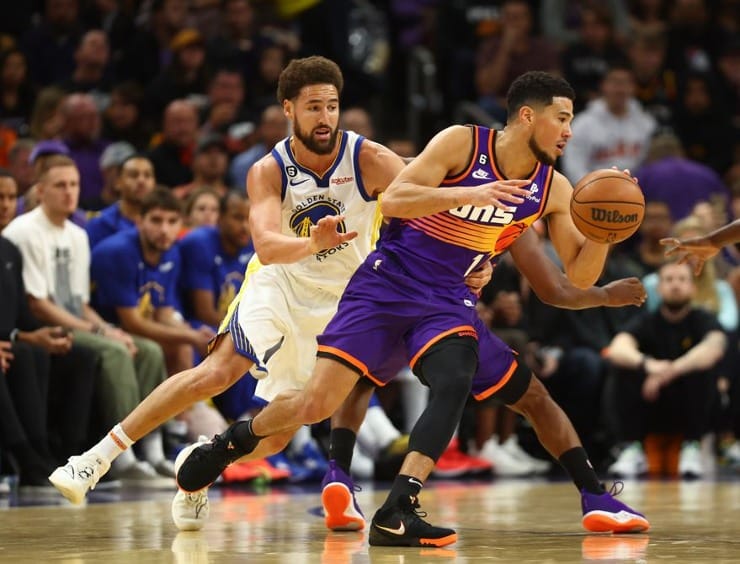 On Tuesday night, Klay Thompson was ejected for the first time of his NBA career after a chest bump with Devin Booker during the third quarter of the Golden State Warriors’ 134-105 loss to the Phoenix Suns.

Prior to both players receiving double technicals, Booker heard Thompson yelling “four rings” multiple times. While he exited the court, Thompson continued to send the same message to the Suns’ bench.

A few NBA betting sites show the Warriors as favorites to repeat in 2023. However, some sportsbooks are giving the Boston Celtics and Los Angeles Clippers higher odds to win a championship this season.

During the postgame interview, the Suns guard explained what happened. “We’re just two competitors,” said Booker. “I love Klay Thompson. I have from the beginning. From the draft, coming out I said I wanna be Klay Thompson.”

“But it’s not going to excuse us from competing against each other and talking a little mess with each other. I’ve always admired his game, how he plays on both ends of the ball.”

“And obviously, the rings speak for themselves,” continued Booker. “So have fun with it. Big fan of his and his competitive nature.” Of course, Klay Thompson did not talk to reporters after his ejection.

Additionally, the five-time All-Star was ejected for the first time of his NBA career in 759 games. This includes regular season and playoff games.

The Warriors guard ended his performance with 2 points, 2 assists, and 1 block in 19 minutes of action. Plus, he shot 1-of-8 (12.5%) from the field and missed all five of his 3-point attempts.

Suns head coach Monty Williams understands the rivalry between the two Western Conference contenders. “I think both teams want it,” Williams told reporters after the game. I don’t think it’s personal at all, and I think we just respect them. They’re the champions.”

After Klay Thompson’s ejection, the Suns outscored the Warriors 22-9. In the fourth quarter, Phoenix held Golden State to 19 points. The Warriors shot 28.6% from 3-point range.

Stephen Curry led Golden State in scoring with 21 points. Now, the Suns are 3-1 to start the 2022-23 season, whereas the Warriors have dropped to 2-2.