When DeAndre Jordan decided to back out of his verbal commitment to the Dallas Mavericks and re-sign with the Los Angeles Clippers in July, most people felt bad for Mark Cuban and his organization. The saga was understandably frustrating, and it left them with a seemingly enormous hole at center.

Jordan’s flip-flop occurred nine days into free agency, meaning that notable big men like Marc Gasol, Brook Lopez, Greg Monroe, Tyson Chandler, Omer Asik, Robin Lopez and Kosta Koufos among others were no longer available for the Mavericks since they had already committed to other teams.

This left Dallas with very few options in the free agent pool. Names like Joel Freeland, Larry Sanders, Samuel Dalembert and JaVale McGee were mentioned. The team ultimately added the latter two big men, but Dalembert was waived in late October and McGee has played a limited role thus far.

Things weren’t looking good for Dallas, but then they pulled off one of the most underrated moves of the offseason 24 hours after Jordan had his change of heart.

Shifting their focus from free agent possibilities to trade options, the Mavericks acquired Zaza Pachulia from the Milwaukee Bucks for virtually nothing. Dallas sent Milwaukee a 2018 second-round selection that is protected for picks 31-55. The only way the Bucks will get that pick is if the Mavs happen to have one of the last five picks in the 2018 draft, so Milwaukee essentially gave Pachulia away for nothing – just to dump his $5.2 million ending contract.

When the move was announced, some fans and pundits mocked Dallas since they went from landing a potential star in Jordan to settling for a 31-year-old role player in Pachulia. The addition of Pachulia, who was joining his fourth NBA team, obviously didn’t generate the same amount of excitement that Jordan’s arrival would have.

Some casual Mavericks fans even took to social media to ask questions about Pachulia’s skill set and style of play because they simply hadn’t seen much of him due to the fact that he has primarily been a back-up throughout his career.

These days, Dallas fans know exactly what Pachulia brings to the table and they couldn’t be more excited about the addition. Pachulia has been extremely successful through 39 games with the Mavericks, which has certainly dulled the pain from Jordan’s rejection.

The trade with Milwaukee has worked out wonderfully for Dallas, as Pachulia has been an enormous steal and a big reason for their success so far this season. The team is currently 23-18, putting them in the Western Conference’s fifth seed. 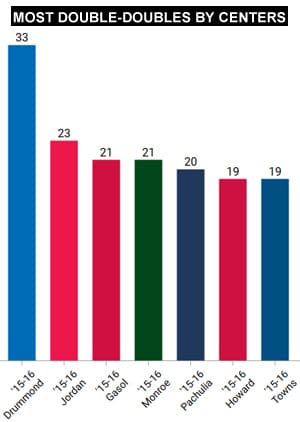 Even though he’s turning 32 years old next month, Pachulia is having the best year of his career, averaging 10.8 points, 10.9 rebounds, 1.8 assists and one steal in 29.3 minutes a night, while shooting 49 percent from the field and 79.1 percent from the free throw line.

This year, Pachulia has 20 double-doubles, which is the fifth-most among centers, and he’s the only player in the NBA with 20 or more double-doubles despite averaging fewer than 30 minutes.

A look at their per-36-minutes numbers provides further evidence that Pachulia has been a bargain addition for Dallas and that there isn’t a huge gap between the two centers.

Jordan is obviously the superior rim protector and that’s a huge part of his game, but Pachulia has been incredibly consistent for Dallas and a double-double machine. He also does things that don’t show up in the box score, such as setting excellent screens and making smart, unselfish passes.

Pachulia is also a strong leader who has pushed the Mavericks to play to their full potential. According to Zach Lowe of ESPN, after Dallas’ blowout win over the Los Angeles Lakers in the third game of the season, Mavs players were celebrating and laughing. Pachulia, however, put an end to that.

“[He] chastised his teammates for letting Kobe Bryant pop open on a set play – a play they’d seen over and over, he told them – late in the fourth quarter, when the game was already decided,” Lowe wrote. “His teammates understood Pachulia’s message: We don’t have the talent to cut corners on defense.”

That’s the kind of competitor that Pachulia is, and that kind of mentality is contagious. He is a strong locker room presence who is determined to contend with these Mavs.

With that kind of attitude, it didn’t take long for Pachulia to win over his new teammates.

“He literally chest bumps me harder when somebody else scores,” Dirk Nowitzki said, according to ESPN’s Tim MacMahon. “He’s unselfish. He wants the team to win. When he has zero points, he’s as happy as when he has a double-double. He’s a team guy.”

“He’s just got that fight,” said Devin Harris, who also played with Pachulia for one season on the Atlanta Hawks. “Every time he comes to the locker room, you see him bloodied up. He’s diving on the floor. It’s that grit that he brings to us that really fits our team well. He kind of talks like Rocky, kind of looks like Rocky, always getting in the mix of things. We need that.”

Nobody is saying that Pachulia is better than Jordan, but the point is that Dallas found themselves a terrific stopgap center when it seemed that all hope of adding a starting-caliber five was lost.

Perhaps the most surprising thing about this whole situation is that Pachulia has significantly more All-Star votes than Jordan, which is shocking considering Pachulia isn’t a household name by any means and All-Star voting is usually a popularity contest driven by casual fans. However, Pachulia is eighth among Western Conference frontcourt players with 299,584 fan votes, whereas Jordan is 13th among West frontcourt players with 133,484 votes. Yes, Pachulia has more than doubled Jordan’s vote count. He also has more votes than frontcourt stars like DeMarcus Cousins, LaMarcus Aldridge, Dwight Howard and teammate Dirk Nowitzki. Remember, we’re talking about Zaza Pachulia!

Pachulia has never been an All-Star or even come close, quite frankly. In fact, he has rarely been a full-time starter throughout his 13-year NBA career. The only other season in which he started every game he appeared in was back in 2005-06 with the Atlanta Hawks. Prior to this season, he had started just 317 of a possible 815 games (38.9 percent) and he averaged just 21 minutes per game for his career.

This year, he has taken his game to another level – particularly on the glass. His 10.9 rebounds per game are even more impressive when you consider that his previous career-high average for a season was 7.9 boards per game (with the Hawks in 2011-12).

Pachulia ranks second in the NBA in total offensive rebounds and third in total rebounds – which, again, is pretty incredible considering he plays significantly fewer minutes than the other players near the top of those rankings. Consider this: Pachulia has grabbed more offensive boards than Jordan despite playing 116 fewer minutes.

Other advanced analytics also demonstrate Pachulia’s importance to the Mavericks. He leads all Dallas players in offensive rating (116.1) and actually ranks 18th among all NBA players in that category. He also ranks 12th in Defensive Box Plus/Minus (2.5) – ahead of stars like LeBron James and Russell Westbrook among others. He’s also very efficient, as his 18.9 PER is second on the Mavericks (trailing only Nowitzki).

Part of the reason Pachulia has been so productive is because he is a perfect fit for the Mavericks. When Dallas acquired Pachulia, Cuban cited his 15-foot jumper as one of the reasons they wanted him. Sure enough, the Mavs have been able to play Pachulia and Nowitzki at the elbows at times and let them do damage from there by shooting, passing or putting the ball on the floor (something they definitely wouldn’t have been able to do with Jordan, who can’t do much offensively away from the rim).

Pachulia is thrilled that things have worked out so well in Dallas and that he has fit in so well. Players rarely like to compare their current team to past squads to avoid offending anyone from their previous stints, but Pachulia isn’t afraid to say that this is easily the happiest he’s been in his NBA career.

“I know it’s surprising for a lot of people, but honestly, I feel like I was just born,” Pachulia said, according to MacMahon. “I don’t want to say anything bad about the places I’ve been, but this is the greatest situation I’ve been in during my career. Starting with the coaching staff and the players, the experienced players I have, the winning mentality, [it’s great].”

Pachulia is excited to be playing for a winner again, considering Milwaukee was a 15-win team during his first year there and just a .500 team last season.

The feeling is mutual, as the Mavericks know they’d likely be in a very different position without Pachulia providing such solid production at center.

“He’s very smart,” Carlisle said, according to MacMahon. “He’s figured out how to play efficiently and effectively within our system, and he loves the challenge of trying to win. He’s a guy who’s totally immersed in the proposition of trying to win and being a part of something bigger than himself. When you do that and give into that and make it all about being a part of a team, great individual things can happen from there.”

Of all the notable players Dallas has acquired over the last few years – from Chandler Parsons to Wesley Matthews to Deron Williams – who would’ve thought that Pachulia would lead the team in All-Star votes and arguably be the best addition? As we learned during the Jordan saga last July, the NBA is full of surprises.