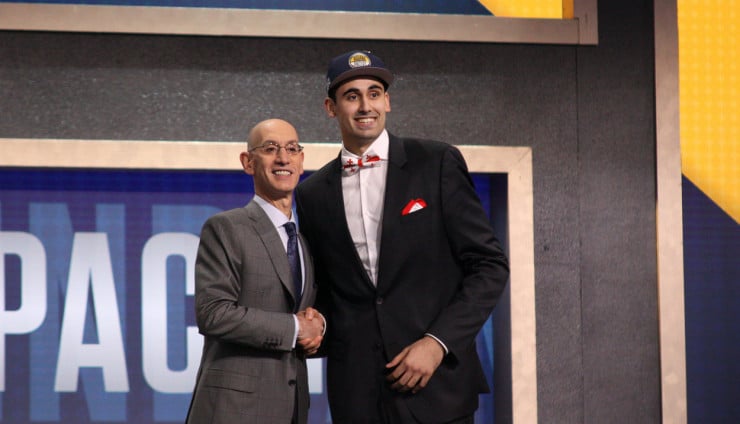 The Indiana Pacers selected international bigman Goga Bitadze with the 18th pick in the draft. Bitadze played well in the Euro league, demonstrating tantalizing offensive prowess. Bitadze has a nice touch around the basket and is competent with the ball whether scoring or moving the ball. Bitadze also brings viable shot blocking abilities on the defensive end to the Pacers. However, on that end of the court Bitasdze will have to improve his footwork and lateral mobility to defend effectively in space. If he is unable to do so, Bitadze could find himself being targeted in pick-and-roll actions and could see himelf on the bench more often than he would like as a result. Look for this to be a major hurdle for him as he transitions to the NBA.

The Pacers already made news earlier today after acquiring forward T.J. Warren from the Phoenix Suns. Adding Warren and now Bitadze alongside Pacers big men Domantas Sabonis and Myles Turner is an interesting development. The Pacers already have to be creative to keep their best players on the court at the same time as Sabonis and Turner tend to occupy similar size and positions.

With Bitadze, the Pacers have another talented center who will have difficulty breaking through the rotation anytime soon barring injury or perhaps additional trades that shake up the roster. However, he should have plenty of time to develop his body and comfort level with the NBA and can learn under some of the better young big men in the NBA in Sabonis and Turner.