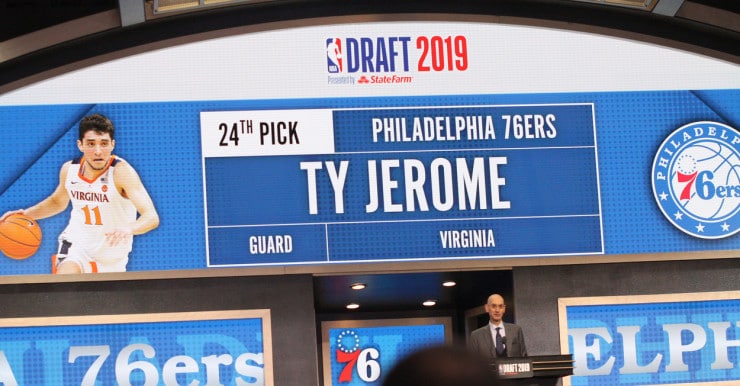 With the 24th overall pick in the 2019 NBA Draft, the Phoneix Suns select guard Ty Jerome of the University of Virginia.

Jerome, a junior, led the Cavaliers to their first National Championship win alongside fellow draftee De’Andre Hunter. He isn’t flashy, but Jerome is an excellent passer; he has a touch and vision that can be hard to find. Jerome isn’t overly athletic either, but his footwork and fundamentals are strong enough to get himself and or his teammates to the right spots on the floor. He plays hard, keeps the ball moving and could be just the level-headed guard the Suns need to play alongside Devin Booker, Deandre Ayton and the host of young talent on their roster.

Again, Jerome isn’t an “athlete” per se and that could hurt him at the next level. His defense isn’t bad, but it isn’t spectacular either — so, alongside Devin Booker, Jerome and the Suns may have a tough time on that end of the court. Jerome’s touch around the basket could use some work as well, but there’s certainly room to grow.

Still, Jerome is a solid talent for the Suns to nab in the back end of the first round. Phoenix has needed a point guard to anchor their roster for quite some time and, while the jury is out for now on whether Jerome can be that guy, he should be a capable contributor going forward.