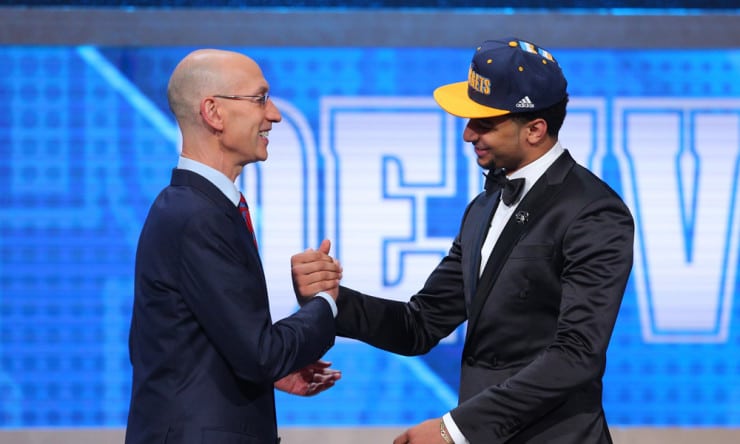 With the seventh overall pick in the 2016 NBA Draft, the Denver Nuggets have selected guard Jamal Murray. After concluding his freshman season at Kentucky, Murray joins a young Nuggets team with the chance to develop into a starter thanks to his skill set that should earn him playing time right away in his rookie season.

The 6’5 guard averaged 20 points per game for the Wildcats in his freshman season, immediately separating himself from his talented freshman teammates with his impressive 45 percent shooting percentage and 40 percent from the three-point line. Murray’s shooting ability will translate easily to the NBA level and fills an immediate need for the Nuggets who only shot 33 percent as a team from the three-point line last season.

While not a freak athlete at the shooting guard position, Murray did show the ability to drive to the basket with solid ball-handling skills and finishing ability thanks to a 39-inch vertical. Murray’s offensive game is already solid and NBA-ready with his shooting ability, decision-making, vision and playing within his skill set.

The Nuggets will have some choices to make for playing time at the shooting guard position with Will Barton and Gary Harris already on the team and developing themselves. Murray should provide them another scoring option either off the bench to begin with or possibly in the starting lineup next to the talented young point guard Emmanuel Mudiay. Mudiay’s athleticism will be a huge help setting up a shooter like Murray, who can rely on his quick shooting release and ability to come off strong from screens.

Murray is not without his weaknesses. He was repeatedly exposed by quicker, more athletic guards in collage so he will need to develop his defensive skills, especially his foot-speed to stay on the floor on the defensive end at the NBA level. Murray’s poor NCAA tournament performance and tendency to fade at times on offense is also some cause for concern.