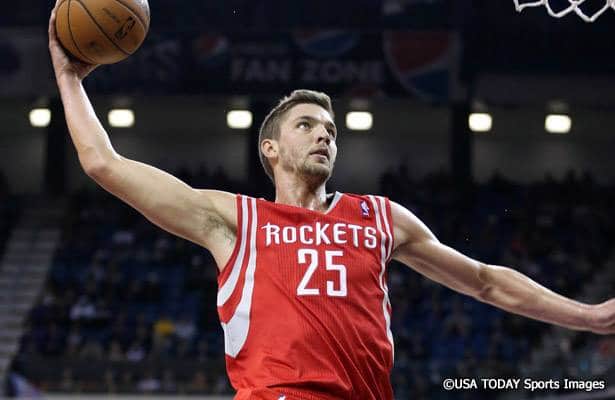 Did Houston Need A Big Trade?

Sometimes the best move is not to make a move.

As the last minutes ticked away before the 2014 NBA trade deadline, the Houston Rockets were sitting pretty as one of the hottest teams in the league. Winners of eight straight games after a blowout win over the Los Angeles Lakers the night before, the Rockets didn’t look like a team in desperate need of a deal.

After months of speculation regarding potential trades for point guard Jeremy Lin and center Omer Asik, the Rockets essentially sat out the deadline frenzy. They did make one tweak, sending Aaron Brooks to the Denver Nuggets for Jordan Hamilton, but as for a move that would radically change the mix, Houston all but stood pat.

The New York Knicks had hoped to turn the corner after the All-Star Break. There was hope that the club could pull off a trade at the trade deadline and shore up the point guard position and make a strong push into the playoffs. With two more straight losses and having dropped eight of their last 10 games, the idea of making the playoffs for New York is becoming harder and harder to visualize and for forward Carmelo Anthony this season is becoming almost too much.

When Philadelphia 76ers rookie point guard Michael Carter-Williams destroyed the Miami HEAT on opening night to the tune of 22 points, 12 assists, 7 rebounds, and 9 steals, we all had a pretty strong sense that the kid was going to be special. The Rookie of the Year race has been rather uneventful in the several months since, as no one has really put up big numbers as consistently at Carter-Williams, and at this point in the season he’s averaging an impressive 17.3 PPG, 6.3 APG, 5.3 RPG, and 2.0 SPG.

Those are really nice rookie numbers, but incredibly, he’s not even having one of the fifteen best rookie seasons in the history of the league. There have been some unbelievably excellent rookies over the years, so as special as MCW has been, he’s just had a lot to live up to.

With the trade deadline behind, the playoffs are in sight as the conference’s brackets begin to take shape. Barring a few improbable developments, the New York Knicks, Cleveland Cavaliers, Minnesota Timberwolves and Denver Nuggets all seem destined to miss out on the playoffs this season, while the Atlantic Division-leading Toronto Raptors, Charlotte Bobcats and Phoenix Suns lead the charge of surprising teams who will join the postseason party.

Aside from the 16-team field beginning to take a discernible shape, the changing of addresses for Evan Turner (Indiana Pacers), Andre Miller (Washington Wizards), Steve Blake (Golden State Warriors) and Marcus Thornton (Brooklyn Nets) figure to add some drama to the final weeks of the regular season.

While the field may be shaping up out West, who will eventually emerge as conference champions, and even how the seeds stack up remain to be seen.

Can Jimmer Fredette Save Career?

The Sacramento Kings are nearing a buyout with Jimmer Fredette, who was making $2,439,840 this season in the last year of his contract. If he clears waivers, he’ll be an unrestricted free agent.

It wasn’t long ago that Fredette was an NCAA superstar and household name. During his senior year at BYU, Fredette’s games were must-watch TV as he averaged 28.9 points while shooting 45 percent from the field and 40 percent three-point range.

He returned BYU to relevancy and, in the process, became a star. Before long, he was being mentioned in rap tracks by Lil Wayne (“I got a chopper and a trimmer shootin’ like Jimmer”) and spawning tribute songs all about him (“Teach Me How to Jimmer” has received millions of views on YouTube). Many people purchased his college jersey and “Jimmered” entered the national lexicon, when Fredette would light up a team or when a shooter in a random park would knock down a shot in his defender’s eye.

The Indiana Pacers remain one of the league’s most intriguing teams, especially in an Eastern Conference nearly devoid of compelling storylines. Currently possessing the league’s best record at 43-13, their two-game lead over the Miami HEAT is far less comfortable than the four to five games that once separated the two in late-January. While this Miami team has proven that they can win an absolutely vital game on an opponent’s home court, these Pacers, immense talent aside, can’t make such a claim.

In a locker room with so much chemistry spawning from an apparent organizational unity, there were some that questioned the decision to finally move longtime Pacer Danny Granger in favor of fourth-year swingman Evan Turner. The truth is, it’s been a long time since Indiana depended upon a healthy Granger to provide the bulk of their nightly scoring punch.

The New York Knicks are in the midst of a skid in which they’ve lost eight of their last 10. They’re five and a half games out of the playoffs and soon-to-be free agent Carmelo Anthony has never seemed more down as even his most impressive scoring efforts haven’t been enough to lead his team to victory. The last thing this team needs is more distractions, but on Wednesday when the recently arrested Raymond Felton returned to practice, his legal troubles trumped everything else Knicks related.

Felton is going to play the rest of the season with pending felony firearm charges, but tried to downplay the distraction in a statement to the press, after which he did not answer questions.

Al Horford’s season-ending torn right pectoral muscle was a blow to the Atlanta Hawks. Nearly two months since the big man underwent surgery, his team is beginning to feel revitalized by the increasing presence of their sidelined leader.

Horford was averaging 18.6 points, 8.4 rebounds and 1.5 blocks per game when he suffered the injury on December 26 against the Cleveland Cavaliers. At the time, the Hawks (26-30) were 16-13 and ranked third in the Eastern Conference. Since then they have dropped to the eighth seed, going 10-17 in his absence.

The Hawks make no secret they miss Horford. Although they will not have him back on the court this season, they are finding motivation by his continued leadership, visits and encouragement.

Bulls Continue To Defy The Odds

What would have been your prediction for the Chicago Bulls heading into March if you were told former MVP Derrick Rose had played in only 10 games and former All-Star forward Luol Deng was dealt away prior to the trade deadline?

Surely, unless you’re an extremely optimistic hardcore fan, the prediction would have been one dreaming of the upcoming draft lottery and not that of a club in the upper echelon of the Eastern Conference standings.

However, the Bulls have continued to defy the odds without Rose and Deng in the rotation, managing to hold off those itching to write the team’s eulogy in the process.

Last summer, Steve Mills was rumored to be a frontrunner for an important NBA executive position based in New York City – but it wasn’t the Knicks GM job, which was then occupied by Glen Grunwald. Word had begun to circulate in July that Mills was in line to replace the exiled Billy Hunter as the new executive director of the NBA players union.

Instead, in an absolutely stunning turn of events, Knicks owners James Dolan “re-assigned” Grunwald (who had built the roster responsible for the Knicks most successful season in nearly two decades) and named Mills the team’s president and general manager. The startling announcement was made on September 26, just four days prior to the start of training camp.

Just in the nick of time? Reports indicate that veteran forward Caron Butler has agreed to sign with the Oklahoma City Thunder. This comes on the heels of Butler’s contract being bought out by the Milwaukee Bucks on Thursday. The terms of his deal with the Thunder are unknown, but the transaction should be completed this weekend, once he clears waivers.

The inner-workings of the Thunder’s front office have always been a mystery, yet many believed Sam Presti, the Thunder’s general manager and executive vice president, would pull off some type of move by the trade deadline. The deadline passed, though, with no changes. Perhaps the return of Russell Westbrook, who had missed 30 games this season, provided adequate comfort that a full roster would carry them to a successful postseason.

Coaching Pro Athletes in The Age of Entitlement

I often joke that there are two jobs that make a person age four years for every one lived. The first: President of the United States. The second: NBA head coach. If you don’t believe me, look no further than Denver Nuggets head coach Brian Shaw. Dude looks like he has a case of heartburn sitting on the bench that hasn’t remitted for nearly six weeks.

I love Shaw’s honesty. I love that he spoke with conviction on a local sports talk radio station in Denver and called out his team for not playing hard and generally behaving in a way that is unprofessional. I appreciate that he makes his players go back on to the team’s charter flight and clean the area where they were sitting rather than expecting a flight attendant to clean up after them. His old school approach strongly resonates with me personally.