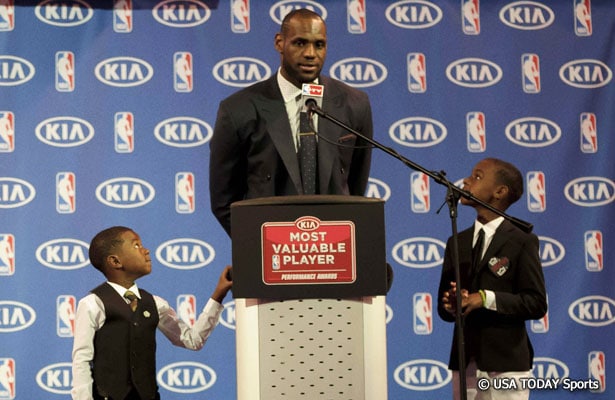 Dunc’d On: Mavericks Have Decisions to Make With Harris

The Dallas Mavericks and Devin Harris agreed today on a reported three-year, $9 million contract.  The Mavericks do not  not have Harris’ Bird or Early Bird rights, as he only joined the team last year in free agency.   Therefore, his signing must be via cap space or the mid-level exception to give him what is more than a 120 percent raise over last year’s salary. We will assume that both Harris’ and Dirk Nowitzki’s reported three-year, $30 million are structured to may the minimum possible in the first year to facilitate additional moves. If the Mavericks use cap space to sign Harris, their committed salaries for 2014-15 and beyond now look like this:

Orlando Summer League: What To Watch For

Perhaps the most vital thing to remember when watching this year’s Summer League action in Orlando and Las Vegas is to not read too heavily into the results, whether extremely positive or disappointingly negative. While this is the first taste of what professional basketball may be like for many players, it is important to maintain perspective regardless of the outcome. Of course, you want to be able to see what the incoming rookie class is all about, and how some of the second and third-year players are progressing; but we shouldn’t hold a great deal of expectation for players that are just a little more than week removed from being drafted into the NBA in many cases.

The moment of truth is coming, the problem is it may not be today. After what could only be described as a circus of a day yesterday, things in South Beach took an interesting twist after a private jet said to be carrying a front office contingent from the Cleveland Cavaliers landed in Ft. Lauderdale for a supposed meeting with HEAT free agent LeBron James.

Immediately following said meeting, reports surfaced that James would be meeting with Pat Riley this week to resolve the situation and bring closure to the rampant speculation about James’ future in Miami.

There have been countless tweets and “sources” claiming to have it on authority that James would do this or James would do that, but the truth of the matter is that no one has a real sense of what James is going to do. Unlike 2010’s trip through free agency, where there was a wealth of information flowing from his side, this go around James’ camp has been mostly quiet, extremely guarded and absolutely non-committal to everyone on every subject.

It is not often that a player can step away from the league for two seasons and then find his way back onto an NBA roster, but Brian Cook, a nine-year veteran who played for the L.A. Lakers and four other NBA teams, is currently giving it his best shot at the Orlando Summer League.

Cook, drafted in the first round by the Lakers over a decade ago, is 33 years old, which makes him an oddity among his Summer League peers, many of whom are in their early-to-mid twenties.

It’s not the conventional route for a return, but when extreme family circumstances take a man away from the game for two full seasons, he’ll do whatever he can to find his way back to the hardwood.

The pick raised some eyebrows. With all but five players available on the board, the Boston Celtics selected Marcus Smart sixth overall in last month’s NBA Draft. Not only did the team already have a point guard, they have one of the best at that position in Rajon Rondo.

This week, the 20-year-old has been showing why the Celtics didn’t pass up on young talent during the Orlando Pro Summer League. In a game where many players rush to make an impact with flashy offense, Smart has made a strong first impression on the defensive end. And there’s always room for defense on a roster.

There is a lot of waiting that comes with being a restricted free agent. Offer sheets can’t be signed until the end of the moratorium period, which is on July 10, and after that the restricted free agent’s original team can take up to three days to decide whether they want to match.

In a summer like this, being a restricted free agent requires even more patience.

The market is at a virtual standstill right now as teams wait for the major dominoes to fall. Carmelo Anthony, LeBron James and Chris Bosh all seem to be on the fence while fielding multiple offers. It could be before the end of the week now before we find out what their final decisions are. Then, and only after then, will restricted free agents like Greg Monroe start to get concrete offers.

The only certainty for Monroe right now is that the Pistons want him back.

Day 3 of the Orlando Summer League is in the books and by now all of the players have played at least two games, with the Thunder and Nets playing their third game on Monday. Having at least their second game under their belts, the players have had a chance to knock off some of the rust and get rid of the first-game butterflies and jitters. The competition for the studs and duds for Day 3 amplified significantly and here are the players who performed accordingly:

Free Agency Moves On The Way

We’re more than a week into the free agency process and the movement up until this point has not matched the hype before the market opened. The holding pattern is due to the best player in the game, LeBron James, taking his sweet time to evaluate all of his options around the league.

The majority of teams know and fully understand they’re not truly in the race for James’ talents. But if James decided to leave Miami, it would set off a chain of events where a team might need to shed a veteran for cap space, trade a promising young asset or give up draft picks.

So while most teams aren’t in contention for the main free agency feast, they’re in a holding pattern ready to scavenge the market in the aftermath where value might be found.

Here’s where we stand this morning:

The Benefits of Being a Restricted Free Agent

With the NBA officially announcing their salary cap numbers for the 2014-15 season, scores of free agents will be laughing their way to the bank over the coming days and weeks.

But none, perhaps, more than Gordan Hayward of the Utah Jazz.

While Eric Bledsoe and Greg Monroe and some of the other restricted free agents who still find themselves on the open market ponder what their financial futures hold, Hayward is content with the knowledge that over the course of the next four years, he will be paid $63 million by either the Charlotte Hornets or Utah Jazz. This is the result of Hayward, a restricted free agent, coming to terms on the maximum-allowable four-year offer sheet with the Hornets.

LeBron James isn’t the only NBA superstar who will be announcing his free agency decision in the coming days. Carmelo Anthony is also expected to reveal his plans any day now, after holding meetings with the New York Knicks, Los Angeles Lakers, Chicago Bulls, Houston Rockets and Dallas Mavericks.

Phil Jackson, the Knicks’ president, addressed reporters in Las Vegas on Thursday after New York wrapped up their summer league practice. Jackson revealed that he hasn’t heard from Anthony since the two spoke at New York’s pitch. Jackson said that he has sent Anthony some text messages, but has not received a response back from the seven-time All-Star.

However, despite their lack of communication, Jackson is confident that Anthony will re-sign with the Knicks, who reportedly offered the superstar a max contract worth $129 million over five years.