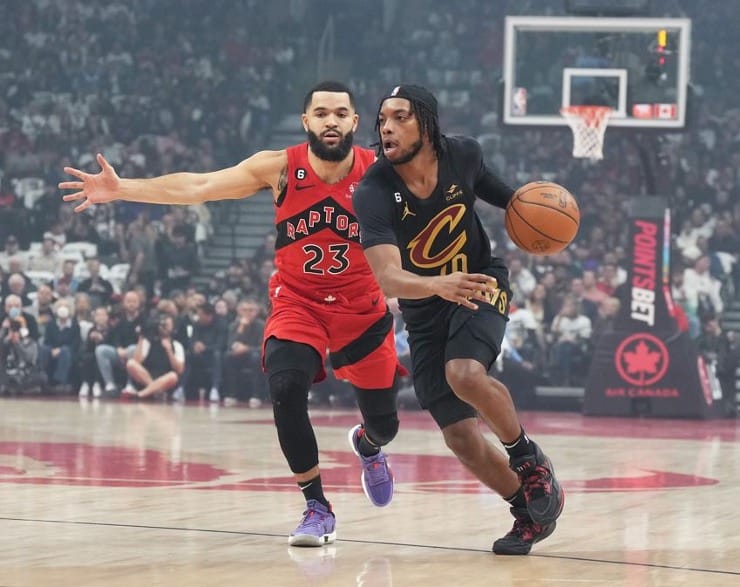 On Wednesday, Darius Garland suffered a laceration on the inside of his left eyelid in the Cavaliers’ 108-105 loss against the Raptors at Scotiabank Arena.

Garland was poked in the eye by Raptors guard Gary Trent Jr. with 3:56 remaining in the second quarter. The All-Star guard stayed face down on the court for a few minutes before walking off to the locker room with the medical staff.

Per multiple NBA betting sites, the Cavaliers have the 14th-best odds to win the championship in 2023. Nonetheless, sportsbooks might lower their odds if a star player misses time.

"He's a fighter. He's a competitor. He's gonna be back strong."

Furthermore, Cavaliers head coach J.B. Bickerstaff revealed that Darius Garland sustained a “a laceration on the inside of his eyelid” and was “cut and bleeding.” The guard did not return.

“His head was clear and all those things, but he was cut and bleeding pretty bad from the inside of his eyelid,” explained Bickerstaff.

“You miss an all-star. You talk about being able to stagger his and Donovan’s minutes so that one of those guys is always on the floor. We know through history what Garland is capable of and how he can carry an offense as well.”

During the postgame interview, Donovan Mitchell was asked about Garland’s injury. “To see DG go down there, it’s tough,” Mitchell said. “I’m proud of the way this group responded.”

“He’s a fighter, he’s a competitor. He’s gonna be back strong.”

Per Basketball-Reference, Darius Garland is projected to average 20.7 points and 7.8 assists this season.

Mitchell scored 31 points in his Cavaliers debut. Plus, Jarrett Allen finished his performance with 13 points and 10 rebounds. Evan Mobley ended his outing with 14 points as well.

Minus Darius Garland, the Cavs needed more than Mitchell to help carry the load. Cedi Osman put up 17 points in 28 minutes of action. Though, had he played a full game, Garland probably would have scored at least 20 points against the Raptors.