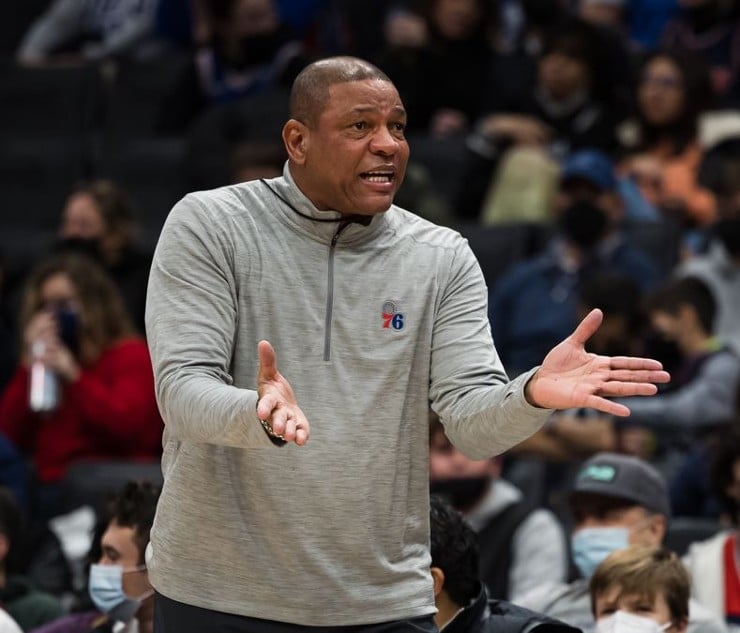 76ers coach Doc Rivers was asked by Vince Carter about the league’s ongoing tampering investigation. On ESPN’s “The VC Show,” while discussing the tampering allegations surrounding James Harden’s new contract, Rivers said, “You handle it, because it’s not true.”

“Honestly, when James [Harden] did this and said this… first of all, we didn’t know what we were going to do with the money we were getting. And listen, James won, too, because James could’ve opted into a one-year deal. Instead, we gave him (two) years. And so both parties won in a lot of ways.”

When Harden opted out of his contract, the 76ers were then able to sign P.J. Tucker to a three-year, $33.2 million contract. Of course, this was at the mid-level exception.

Not to mention, the move was made to sign Danuel House as well. In the YouTube video below, the tampering discussion begins at the 20-minute mark.

Harden told Daryl Morey, the Sixers president of basketball operations, that he would have “what was left” of the team’s $33 million hard cap. Then, the 10-time All-Star signed a two-year, $68.6 million contract extension with the organization. He’s expecting a supermax deal next summer.

Now, the NBA is investigating on whether or not Harden opting out and re-signing was preplanned. If so, the 76ers violated the league’s tampering rules. Though, Doc Rivers seems genuine in the video above. A few other teams across the league were investigated for committing the same infraction.

The Knicks and Sixers are being investigated for tampering

Last December, both the Heat and Bulls were docked a second-round draft pick for tampering. The Bulls were caught by allowing the Lonzo Ball sign-and-trade with the Spurs to take place. Likewise, the Heat were penalized for Kyle Lowry’s sign-and-trade from the Raptors.

Right now, the NBA is also investigating the Knicks for tampering. Before free agency began, multiple sources reported that Knicks president Leon Rose remained in contact with Jalen Brunson while he was still with the Mavericks.

For good news, at least the NBA’s tampering rules are not as harsh as the NFL’s. The Miami Dolphins were fined were docked a 2023 first-round draft pick and a 2024 third-round draft pick. And executives Stephen Ross and Bruce Beal were fined $1.5 million and suspended from team activities.

If the NBA finds anything on the 76ers, the worst Rivers can expect is probably a loss of a second-round draft pick. It’s still a big deal, but the consequences for breaking this rule in basketball are not as severe.

More news stories concerning Doc Rivers and the 76ers are on the main page.