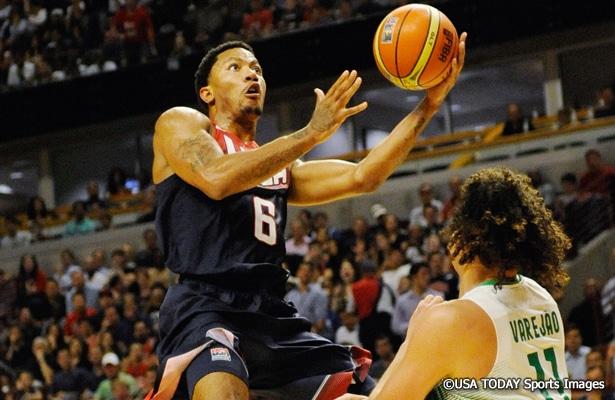 Australia evoked much consternation after its 91-83 loss to Angola put it third place in Group D and allowed it to theoretically avoid the US until the semifinals.  SI’s Ben Golliver did an excellent job detailing some of the questionable aspects of the game, which certainly included resting Australia’s best players and may have included intentional in-game tanking to allow Angola to win.

Many have blamed the format of the tournament rather than the Boomers themselves, arguing they merely responded to incentives that were too powerful to ignore with the brackets set out ahead of time.  That is certainly the case; anyone with half a brain could project before the tournament that with the US certain to finish first in Group C, the spots to get were second and fourth in Group C and first and third in Group D to avoid the US until the semifinals.  A similar calculus applied to avoiding Spain in Groups A and B.

The predictability is what enables (some would say compels) tanking into certain positions to avoid the strongest teams as long as possible.  The solution is to take away that predictability, through one of several systems.

The one I like the most is to allow the four number one seeds to pick the opponents in their four team “pod.”* My preferred method would be to give the number one seed choices on each seed line in descending order of record (or point-differential, if records were tied).   This year, the U.S. was tied for the best record with Spain, and had the best point differential in the group stage.  That would allow it first choice among the four number four seeds for its bracket, namely Serbia, Senegal, New Zealand and Mexico.  Spain would then select second among the remaining teams, then Greece, with Lithuania getting the straggler.  The same process (in the same order) would then occur for the number three seeds France, Argentina, Dominican Republic and Australia, followed by a selection among the two seeds Brazil, Croatia, Turkey and Slovenia.  The bracket would then unfold in the standard fashion: first seed in each pod plays fourth, second plays third, then the two winners play for a berth in the semifinals.

This system would take away the problematic certainty, as predicting how the number one seeds would pick would likely prove very difficult.  Teams would simply have the incentive to play as hard as possible to assure the highest seed and stay away from the number ones as long as possible.  And even teams who had locked up their group would have the incentive to keep playing to earn a better record than the other number ones.  The proposal would also provide the entertaining element of the number one seeds picking their poison while the selected teams complained about lack of respect.  There could even be a selection show!

If it were believed this system gave too much of an advantage to the best of the number one seeds–who after all are compiling their various records against different groups–a snake draft system could also be implemented.  And if the element of picking one opponents were deemed too unsportsmanlike, the two through four seeds could simply be assigned to each pod randomly.

The only downside to this system is that it might require a slightly longer break before the knockout round to allow for the selection process and arranging the logistics of traveling to certain cities.  By contrast, this year teams in Groups A and B knew they were going to Madrid and C and D knew they were going to Barcelona for the knockout rounds.  However, blocks of hotel rooms could still be reserved in advance by the tournament for the teams to stay in, even if it were unknown which teams those would be beforehand.

Regardless, these downsides are of far less magnitude than the evils of tanking that we see in every FIBA tournament.  Removing the matchup certainty is the way to eliminate the bad incentives and ensure fair play throughout the tournament.