The Dallas Mavericks and Devin Harris agreed today on a reported three-year, $9 million contract.  The Mavericks do not  not have Harris’ Bird or Early Bird rights, as he only joined the team last year in free agency.   Therefore, his signing must be via cap space or the mid-level exception to give him what is more than a 120 percent raise over last year’s salary. We will assume that both Harris’ and Dirk Nowitzki’s reported three-year, $30 million are structured to may the minimum possible in the first year to facilitate additional moves. If the Mavericks use cap space to sign Harris, their committed salaries for 2014-15 and beyond now look like this: 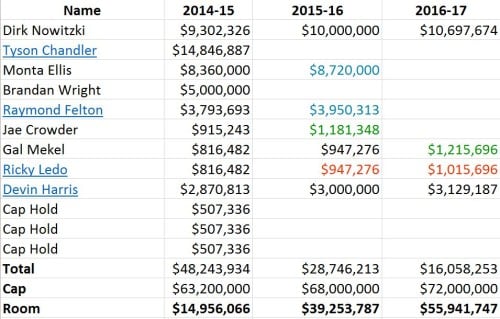 That would leave the Mavs with a little under $15 million in cap room to sign free agents.  Signing Harris using cap space would also cause them to lose their mid-level and bi-annual exceptions, leaving only the $2.7 million Room Exception.  Teams may only sign players to contracts up to two years using the Room Exception.

Therefore, the Mavs will likely wait to see what happens with their other free agent targets and their own incumbent free agents before deciding between signing Harris using cap space or the mid-level exception. If the Mavericks re-sign Shawn Marion, Vince Carter, and DeJuan Blair, they may never go under the cap at all.  In fact, they are still technically over the cap due to those players’ cap holds and the available exceptions.  Nevertheless, if Dallas intends to sign other free agents using cap room, they just lost another $2,870,813 of it at minimum.