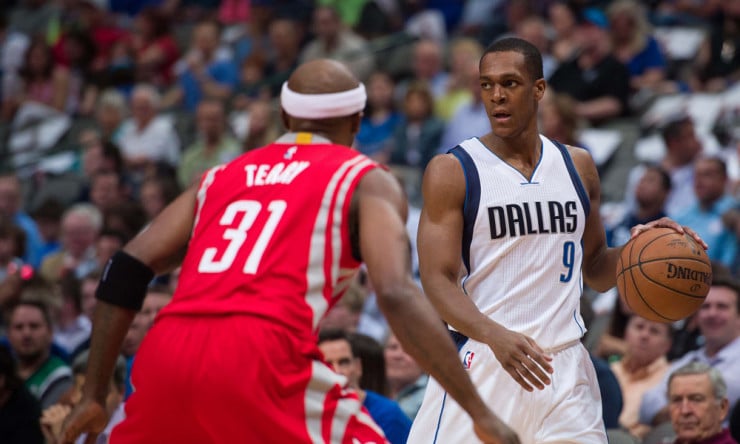 Just like the opener of the series, the Rockets mostly controlled Game 2 despite hardly performing at their peak capacity. Superstar James Harden couldn’t find his touch from the field, going just 5-17, but it didn’t slow Houston down one bit. Their wing combo of Harden and Trevor Ariza, also their two highest minute-loggers on the night, combined to shoot a putrid 23 percent (6-23), and yet the Rockets were still in roundly positive figures while either was on the court – a healthy plus-18 in Ariza’s case despite his 1-9 shooting for just four points.

Dwight Howard was largely responsible for the success on Houston’s side of the ball, and appears to be rounding into the best form we’ve seen from him since his Orlando days. He put down 28 points and 12 boards on just 15 shots, posting a game-high plus-22 on-court figure to boot, and was easily Houston’s most impactful defender. He’s shown fire and an ability to impact the game heavily on both ends of the floor both in recent weeks and to start off the postseason, and Houston becomes a whole different animal when he’s at a level where off nights from Harden can go virtually unnoticed.

Going forward, it’s hard to find much Houston should change. The Mavericks are imploding on themselves, and things should be even easier when Harden is back in his groove – Dallas just has no answer for the combination of him and Howard. The Rockets are playing exquisite defense and snuffing out everything the Mavs are looking for, and it’s hard to see them relinquishing a stranglehold in this series barring a large turn of events.

Dallas needed a number of things to break right to have a chance against a far more complete basketball team, but virtually none of these have done so. Chandler Parsons is battling a knee injury and was ineffective in Game 1 before being forced out of Game 2 entirely. Monta Ellis is working his tail off, playing a game-high 38 minutes Tuesday night, but just isn’t efficient enough in the long run to save a Mavs attack that looks a shell of its early-season dominant self.

Dallas was never sniffing four wins in seven games without a bump in Dirk Nowitzki’s play, and as saddening as it is to say, it’s beginning to look like this may be the end of his days as a top option for a contending team. Dirk was 3-14 Tuesday night, and just 2-8 on uncontested shots, per SportVU tracking. It’s been even worse on the other end, where the Rockets are relentlessly targeting Nowitzki and he’s been incapable of stopping the bleeding. Tyson Chandler is being stretched far too thin between a surging Howard and Chandler’s own attempts to cover up errors from teammates, and the Mavs were a dreadful minus-25 with him on the floor in just 30 minutes in Game 2.

And then, of course, there’s Rajon Rondo, siphoning future earnings out of his bank account with each passing minute he spends on the floor. He’s been a complete train wreck on both ends (even with Houston missing their starting point guard, Patrick Beverley) and played just 10 minutes Tuesday night, benched in favor of J.J. Barea and Raymond Felton.

Truthfully, it’s tough to see what Dallas can realistically do to win this series. They’re in a 2-0 hole and simply don’t have the personnel to combat what Houston is throwing at them. A return from Parsons could goose things offensively a bit, but he’s assumed to still be well under 100 percent. One hopes to see a renaissance game or two from Dirk before the series is out, but Houston has done a wonderful job taking away his preferred looks, and Dallas just doesn’t have the capability to punish them for it at this point.

The Rockets take their series lead up to 3-0 on the back of a rebound performance from Harden and continued exploitation of Dallas’s clear weak spots.