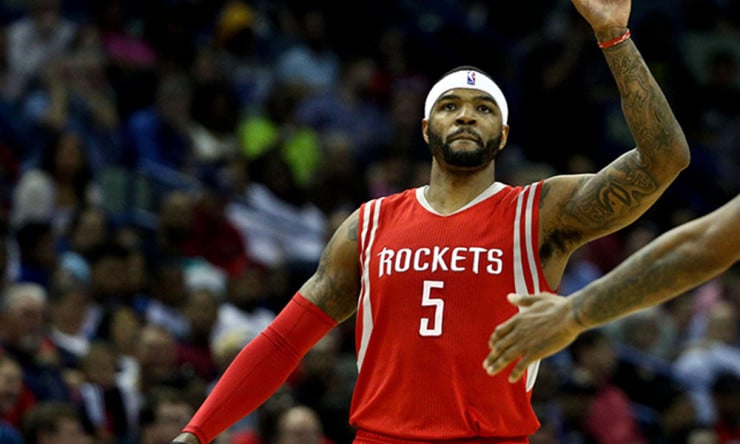 The Rockets have found just about as smooth a groove as possible offensively against a Mavericks defense that’s woefully undermanned. They put up a season-high 42 points in the first quarter against Dallas on Friday night, and even missed a few easily make-able shots that may have pushed them closer to 50.

Houston just has so many things working on the offensive end, and it’s hard to see how even a creative coach like Rick Carlisle can combat it given what he’s working with. Josh Smith has been panned seemingly into obscurity by many a prognosticator, but is showing his true value in this series while rediscovering his AAU (drink!) chemistry with Dwight Howard. The frontcourt tandem has worked a wonderful two-man game, with Smith’s passing serving as the foundation for a number of snug pick-and-rolls between the two that have left a thin Mavs frontline with their heads spinning. Smith has now assisted on eight of Dwight’s 20 made baskets so far in the series, a huge percentage for a big combo and five more than any other Houston player.

The Rockets will need to tighten things up on defense, without question. They’re getting by against a Mavs team without a chance of stopping them, but can’t count on that moving forward and even for the remainder of this series. A 72-point half allowed in Game 3 won’t be acceptable anymore, but credit to Houston for doing enough elsewhere to render it a moot point.

It’s looking like a supremely disappointing year for the Mavericks after what started out as such a promising season. Even with the distraction of Rajon Rondo purged, Dallas simply can’t defend well enough to consider stopping a team finding its footing offensively like the Rockets.

I noted before the series how Dallas would have very little chance without a throwback performance from Dirk Nowitzki, but even such a game from him Friday night wasn’t enough. The Mavs’ defense when he plays with Amar’e Stoudemire has been atrocious, repeatedly carved to pieces by the aforementioned two-man action between Smith and Howard, or even Terrence Jones. For the series, in an incredibly saddening statistic, the Mavs have actually been better on a per-possession basis with Nowitzki off the floor.

And with Chandler Parsons done for the year, there just isn’t enough on this roster. Carlisle got creative in Game 3 with some defensive coverages and may try more of the same with his team’s backs against the wall. But the simple fact remains that Dallas has no one capable of checking James Harden or even close (he had a career-playoff-high 42 points Friday night), and he’s just too dangerous to contain without giving help and opening things up for him to facilitate. Look for Carlisle to really shake things up in Game 4, including likely a huge dose of Al-Farouq Aminu – likely Dallas’ best two-way player in Game 3. But it’s tough to see it being enough barring an off game from the Rockets.

I had Houston in five initially, but the gap between these teams is even wider than I had imagined. Houston breaks out the brooms Sunday night.